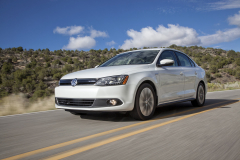 DETROIT – It’s rare to use fun to drive and hybrid in the same sentence. But Volkswagen has managed to create a hybrid in the form of its Jetta compact sedan that had a lot of spirit during a week-long test drive.
Key was the 2014 Volkswagen Jetta Hybrid’s 1.4-liter four cylinder turbocharged direct injection gasoline engine that made 150 horsepower. Coupled with a water cooled 27 horsepower electric motor, the pair combined to make 170 horsepower. That provided plenty of oomph for the Jetta Hybrid.
The seven speed dual clutch transmission selected gears smoothly; acceleration was authoritative whether on the expressway or from a standing start on surface streets and the car moved with some assertiveness. Press materials said the Jetta Hybrid could get from a standstill to 60 mph in 8.6 seconds.
Still, the car had an impressive EPA fuel economy rating of 42 mpg in the city and 48 mpg on the highway. Under normal driving, it could remain in electric mode up 37 mph briefly. Put it in E-Mode and it could get up to 44 mph.
We could see pavement and the gaping potholes that had formed during a long and harsh winter. The Jetta Hybrid had damper struts with lower control arms and an anti-roll bar front suspension and a multi-link independent layout in the rear that featured gas-pressurized dampers and separate coil springs.
The set up gave the Jetta Hybrid a solid ride that was quiet when traversing ruddy patches of pavement. While going over bumpy streets, there was little noise, vibration or harshness. The car had that solid feel that comes with a quality build. The only time this Jetta felt less than solid was when closing the rear door. The thud seemed kind of flimsy.
Like most hybrids, the Jetta did have regenerative braking to capture energy and charge the electric motor’s battery. The Jetta Hybrid increased the amount of regeneration by decoupling the engine from the drivetrain, which reduced drag by engine braking and increased the amount of heat, thus, energy.
That’s from the press material but when the engine decoupled it also depowered the car putting it in a coast and that made it much easier for the brakes to stop the vehicle. In fact, it took a little adjustment as to not stop short.
The engine also shut off and decoupled from the driveline to eliminate drag caused by the engine’s torque at higher speeds—up to 84 mph—when the driver released the gas pedal. This helped to save fuel when, for instance, the car was going down a gentle slope or was coasting to a halt.
As usual the interior of this Volkswagen was clean and crisp. Fit and finish were good. The car was ergonomically friendly. The driver didn’t have to reach for anything and everything was easy to see.
The back seats were comfortable too. They could hold two full-size adults without any problem. There was ample leg room as well as a good bit of head space. However, the rear seats were a little hard. It would be interesting to see how a body would hold up, say, for a lengthy drive lasting several hours in the back seat of the 2014 Jetta Hybrid.
An interesting aspect of the car was its trunk. It was two-tiered. The lower tier in the front had an area that had a miniature fence-like railing around it. It was obviously for groceries and other small items. The second and higher tier was in the back. There were also two pull levers that would release either side of the back seat and create a pass-through from the trunk.
We had the SE trim line of the 2014 Jetta Hybrid. In other words, it was the base model. There are two higher trim levels: the SEL and the SEL Premium. Still, the SE’s equipment wasn’t bad. It had push button start and stop as well as keyless access. It also featured Bluetooth, satellite radio, a CD player, SD card slot, an auxiliary jack and what Volkswagen called partial power front seats and LED taillights.
Unlike other automakers that load up their hybrids to help cover up the higher cost over their gasoline powered models; Volkswagen seemed to head in the other direction with this car. In other words, the 2014 Volkswagen Jetta Hybrid SE didn’t have a lot of frills.
And because it didn’t have a lot of stuff the price was held to $28,080 as tested.