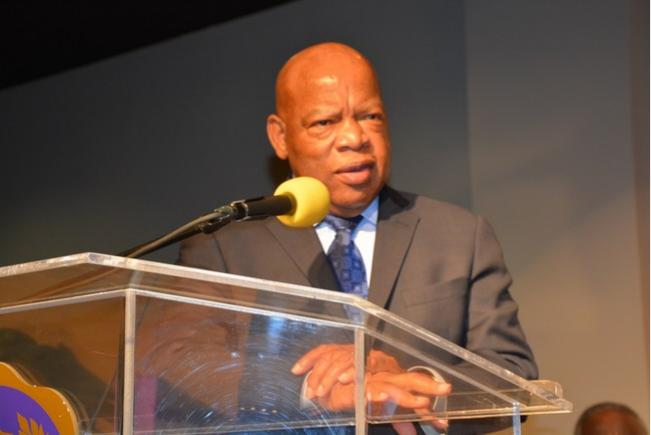 Georgia Congressman John Lewis on Monday delivered a riveting speech to dozens of students, teachers and dignitaries who flooded Miles College to hear him speak.

“Stay with this house called Miles, its brought us this far,” he told an eager and excited crowd inside Pearson Hall auditorium which was filled to capacity. People even lined the back walls as the anticipation grew.

“What a wonderful occasion to have such an icon sit and visit with us,” said Reverend Larry Batie, Dean of Student Affairs, as the entire room stood to their feet to welcome Lewis.

Lewis, an Alabama-native is not a very large man in stature, but he delivered his speech with great force and authority. His voice echoed through the auditorium as everyone leaned in to listen to every word.

He had visited the Miles College campus many years before, but as a young man with a passion for change and to help organizers with plans to dismantle segregation in the South, he said. He returned Monday as a Civil Rights icon with an enchanting speech about courage and ethics.

Lewis told the audience that he wanted to minister ever since he was a child. He told of how he and his brothers and sisters would play “church.” They would gather in the chicken coop of their old farm with the chickens and Lewis would preach the gospel to his “congregation.”

“They never quite said ‘Amen’, but they listened,” said Lewis, to laughter.

He told of meeting with Dr. Martin Luther King, Jr. after Lewis wrote a letter to King after not getting accepted into Troy University.

Lewis would become known as “the boy from Troy” to King. Lewis would move to Nashville, Tennessee where he led non-violent protests to challenge the segregated facilities.

Although Lewis and his protesters advocated a nonviolent movement, they suffered the consequences of challenging the Jim Crow South rulings and were beaten mercilessly, some even killed, he said.

Lewis, who was arrested over 40 times, recalled his first jail experience. “I felt free and liberated the first time I went to jail,” Lewis admits. By the time he turned 22, he served on the board of the Dr. King-founded Southern Christian Leadership Conference (SCLC) as the liaison between the young people and adults.

In 1963, Lewis became chairman of the Student Nonviolent Coordinating Committee (SNCC) the same year he helped organize the “March on Washington” as one of the “Big Six” leaders of the Civil Rights Movement. He was one of the youngest speakers present.

Lewis stressed the importance of voting. “People gave blood for the right to vote,” he said. “We must use it. It is up to you as young people.”

After Lewis’ spoke students were allowed to ask the congressman questions. He advised them to be confident and to be themselves. “Be comfortable in your own skin, be proud,” he says, “Be happy.”

Also during the forum Jonathan McPherson, another civil rights activist who marched with King and others, took his time to give his thanks to Lewis. “I do not have a question,” he says, “I just want to thank God that you are here.”

Following his speech, Lewis was awarded the Key to the City of Fairfield by Mayor Kenneth Coachman, as well as the Crystal George Award which is the highest honor given by Miles College.

Dr. Richard Arrington, the first black mayor of the city of Birmingham, gave remarks on behalf of Miles President George French thanking Lewis for efforts. Batie then announced that a voter registration drive would be held and welcomed unregistered students and guests to sign-up. 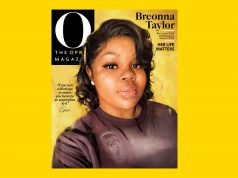