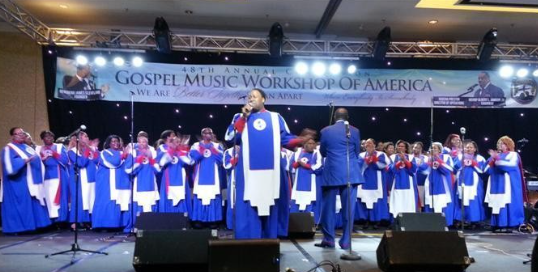 The 49th Annual Gospel Music Workshop of America, Inc. (GMWA) will convene in Birmingham on Sunday, July 24 at the Sheraton Hotel, with a week of events that offer music classes, seminars, workshops, exhibits and musical showcases.

As an international faith organization, the GMWA has over 75,000 members worldwide, with over 150 chapters in most every state in America and many cities around the world. There will be over 7,500 members from around the globe in Birmingham for the event.

Part of the convening will feature “GMWA SERVES” which is designed to help hundreds in need in Birmingham. Ten local charities and churches have been chosen to receive the support of 200 volunteer GMWA Ambassadors for what Birmingham Mayor William Bell and local officials will honor as “GMWA Serves Birmingham Community Service Day.”

A press conference will be held in Birmingham on Friday, July 23, 3 p.m. at the Birmingham Jefferson Convention Center (BJCC) to announce the convention and the “GMWA Serves” project to the city.

This years’ service will feature clothing, canned goods and toys for tots to give-a-way. There will also be many singing choirs to perform for the local residents during the community service.

The convention was founded by the Late Rev. James Cleveland in 1967.

Visit the GMWA website www.gmwanational.net  for more information about the convention and GMWA Serves.