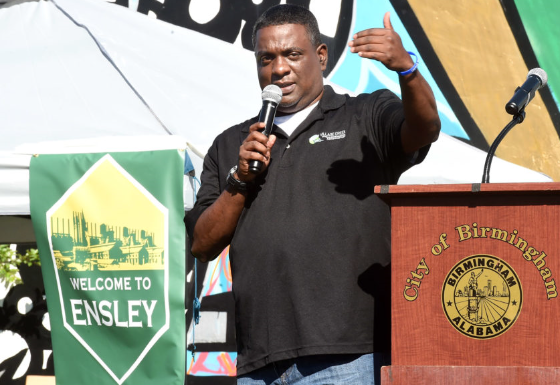 There was a time when as much as four to eight feet of water would flood homes in the Ensley community, forcing dozens of residents along Village Creek to be rescued by canoes and boats. Federal emergency officials would sweep into Birmingham, move people from homes, and clear the site along the creek because of the chronic flooding.

“From the late 1980s to the early 2000s, there was a huge flight of people moving away from those areas,” said Yohance Owens, executive director of the Village Creek Human and Environmental Justice Society Inc., commonly called the Village Creek Society (VCS), a nonprofit organization founded in 1980 and incorporated in 1999.

The VCS not only wants those residents to return but also hopes businesses will move into the area.

“We have to have businesses that want to be part of these communities near the creek,” Owens said.

The VCS’s mission is to improve the entire length of Village Creek to benefit the 300,000-plus residences, businesses, schools, and churches in its watershed.

The water still rises today, but flooding is not as bad as it used to be. And the VCS now wants to attract residents and businesses, and improve the quality of life along the creek through efforts to stabilize water banks, as well as through cleanups, education, workshops, trails, parks, and outdoor classrooms. It’s a herculean task, and Owens knows it begins with education.

Environmental issues are even more critical with President Donald Trump on June 1, pulling the U.S. out of the Paris climate accord, an agreement within the United Nations Framework Conventions on Climate Change (UNFCCC).

To encourage young people to be good stewards of the environment, the VCS provides outdoor classrooms for after-school programs and works with area schools on cleanup projects.

“We need folks who really care about our environment, like the students who are coming up now,” Owens said. “We want to have classes by the creek and get students outside, but we also want to make sure we have a structured environment for them.”

“If you’re an African American and you live in North Birmingham and Village Creek is an area where there’s notable pollution, you would want to try to keep it clean because these creeks are running right through your community,” said Cade, who is also an industrial hygienist, registered environmental manager.

“The black community itself has, for a number of years, been a community where they try to talk about our diseases are high in our community, but in my opinion, I think about 60 percent of the diseases we see are related to environmental exposure,” he said. “You should be concerned about what you’re being exposed to so you don’t contract any of those diseases.”

On May 6 more than 60 students came out on a Saturday morning for the VCS’s Ninth Annual Spring Cleanup and the Ensley Neighborhood Flag Dedication; this was the kickoff event for the Neighborhood Love Your Block project.

“The older you get and go into adulthood, you’re going to realize that community service is a very strong aspect of our society,” said Owens.

“It’s always good to help the community out,” Camp said. “I’m from Ensley. This is my neighborhood, so I think it’s very important to revive it. … It can be better than what people think it is.”

By cleaning up their own neighborhoods, students learn the importance of giving back to the community, Camp said: “Giving back can look different than what most people expect. This is our way of giving back.”

One of Camp’s teachers, Maria Reese, said she has worked with the VCS every year since 2003 and decided to involve her students, who earn community service hours for participating in cleanup events.

“I’m a stickler for recycling,” said Reese, a history teacher at Carver High. “I hate to see trash in our neighborhood, especially our own. If we can do anything to prevent that by simply cleaning up, I’m all for it.”

Clara Almeida, 16, another Carver student, said the project was a way to get students involved in activities outside of school.

“This shows them how important it is to be part of your community,” she said. “School activities are great, but we still live in an environment that we can get involved in.

“I hope people will stop littering,” Almeida added. “When people see us out here doing this work, I hope it makes them change their minds about just throwing stuff on the ground.”

Another way to get students involved with and concerned about environmental issues: debates. Last month, Owens spent a morning at Malachi Wilkerson Middle School debating with students about science and other topics.

“As an adult, it’s my responsibility to get these kids into an environment where they can showcase their talent,” Owens said. “We live in a world where everything is so negative toward younger people. … I was very proud of them.”

“I was just happy the debate was over when we got to the science part,” he said of the event. “Those kids ran over me. They are incredibly smart.”

As executive director of the VCS, Owens’s duties include more than dealing with flood-related issues. In addition to his education efforts, he works to revitalize different communities within the Village Creek watershed. In March 2016, for example, officials broke ground on the Linear Park and Trail in the Ensley area. Establishing the trail had been Owens’s goal since he took his VCS leadership position on Oct. 5, 2014.

“The property being used is a place where people once lived and had been affected by the floods so many times,” he said. “We’re turning our effort toward turning the trail into a recreational place that people don’t look at as a disparity anymore, but a place that serves as a symbol of pride.”

The revitalization is not just in Ensley: “We’re also involved in more partnerships now,” Owens said. “We have an annual East Lake cleanup, so we’re expanding our efforts.”

Keeping urban areas environmentally safe is important, but it’s a challenge is to get the community to “buy into the fact that we have to protect God’s creation,” Owens said.

“For many years, these areas have been redlined,” he said. “They put landfills in or dump hazardous waste in these areas. You can look at what’s happened in Flint, Michigan. That’s a predominantly African-American area.”

That isn’t to say that these issues don’t happen in rural areas.

“Of course, it happens there. But it’s more prevalent when Village Creek rises, and nothing is being done, and there is a neighborhood full of African-Americans who need help,” he said. “We all face the same problems, no matter what race we are.”

Owens strongly believes that there is a community of young people who are willing to help, given the proper education.

“It’s very rare to hear people talk to our children about being environmental scientists, so I want to show them how fulfilling a career like this can be,” he said. “That’s the baton I’ve picked up, and I want to utilize it.”