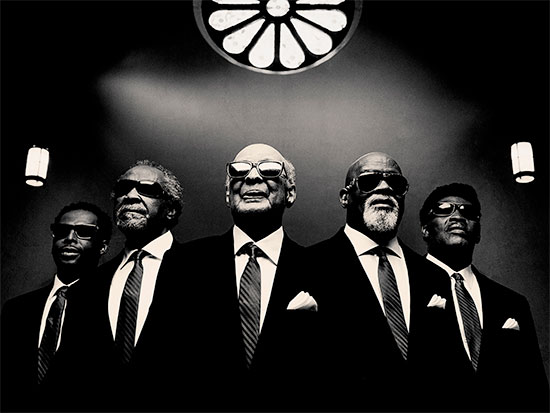 Celebrate the life and legacy of Martin Luther King Jr. with a tribute concert featuring five-time Grammy winners Blind Boys of Alabama on Jan. 14, 2018, at the University of Alabama at Birmingham.

Presented by the City of Birmingham in association with the Alabama Bicentennial Commission and the UAB College of Arts and Sciences’ Department of Music, the Martin Luther King Tribute Concert will also feature the combined choirs of Alabama A&M University, Alabama State University, Birmingham-Southern, Miles and Talladega colleges, Tuskegee University and UAB, with an orchestra conducted by UAB University Professor Henry Panion III. The show will feature the music of the Blind Boys of Alabama with a special arrangement by Panion of their current Grammy-nominated recording “Almost Home.”

Hailed as “gospel titans” by Rolling Stone, the Blind Boys first rose to fame in the segregated South with their thrilling vocal harmonies and roof-raising live show. In addition to the group’s five Grammy awards for their recordings, they have been awarded a Lifetime Achievement Grammy, been named to the Gospel Music Hall of Fame, collaborated with artists from Mavis Staples and Stevie Wonder to Prince and Lou Reed, and performed on the world’s most prestigious stages. The Washington Post has praised their “soul-stirring harmonies” and “range of cross-genre collaborations,” and The New Yorker simply called them “legendary.”

The celebration of Alabama’s bicentennial includes identifying and commemorating significant Alabamians who have made a contribution to the state and nation, Panion says. The Blind Boys of Alabama are ambassadors of Alabama all around the world.

“As a city and state thinking about our legacy, we focus on them,” Panion said.

In the seven decades since the Blind Boys of Alabama first began singing together, America has witnessed a World War, the civil rights movement and the Summer of Love; the moon landing, Vietnam and the fall of the Berlin Wall; JFK, MLK and Malcolm X; the invention of the jukebox, the atomic bomb and the internet. Through it all, the Blind Boys’ music has not only endured but thrived, helping both to define the sound of the American South and to push it forward through the 20th century and well into the 21st. Praised by NPR as “pioneers,” the group has transcended barriers of race and genre to become one of the most acclaimed and celebrated groups in modern music. From the Alabama Institute for the Negro Blind, where the original members met as children, all the way to The White House, where they’ve performed for three presidents, the band’s story is, in many ways, America’s story, and that story is at the heart of their emotional new album, “Almost Home.”

The seeds of “Almost Home” were planted with the awareness that long-time group leader Clarence Fountain and current leader Jimmy Carter are the only surviving original members of the band. Both men were born in Alabama during the Great Depression, and while Carter is still active and regularly touring with the group, Fountain’s health precludes him from traveling much these days, though he does appear on the album.

In 2019, Alabama will celebrate its 200th birthday. The bicentennial commemoration ALABAMA 200 is an unprecedented opportunity to celebrate the state’s wonderful places, remember the people who made Alabama great, nurture the generations who will carry the state forward and learn from history as we build for the future. From a history walk and folk-life festivals to traveling exhibitions and reunions, ALABAMA 200 is creating a three-year celebration. It began in 2017 by “Discovering Our Places,” which coincides with Alabama’s territorial bicentennial. 2018 is the year for “Honoring Our People” and sharing the experiences and stories of all Alabamians. “Sharing Our Stories” will be the theme of 2019.