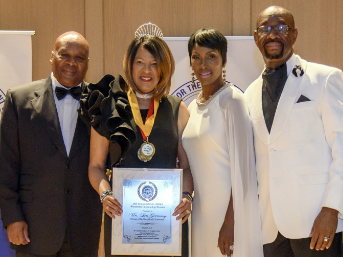 Germany received the award during the NAACP’s 18th annual Wonderful Outstanding Women (WOW) program at the Birmingham Museum of Art.

Germany, who was recognized along with the Sixth Avenue Sliders, was motivated to initiate such a ministry because she was inspired by former first lady Michelle Obama’s “Let’s Move” campaign which targeted childhood obesity.

Hezekiah Jackson IV, president of the NAACP Metro Birmingham Branch and program chair, said, “if any group of women in the City of Birmingham deserve to be honored for promoting good health and fitness in the community, it is certainly Lois Germany as ‘Women of the Year’ along with all 61 of the Sixth Avenue Sliders women.”