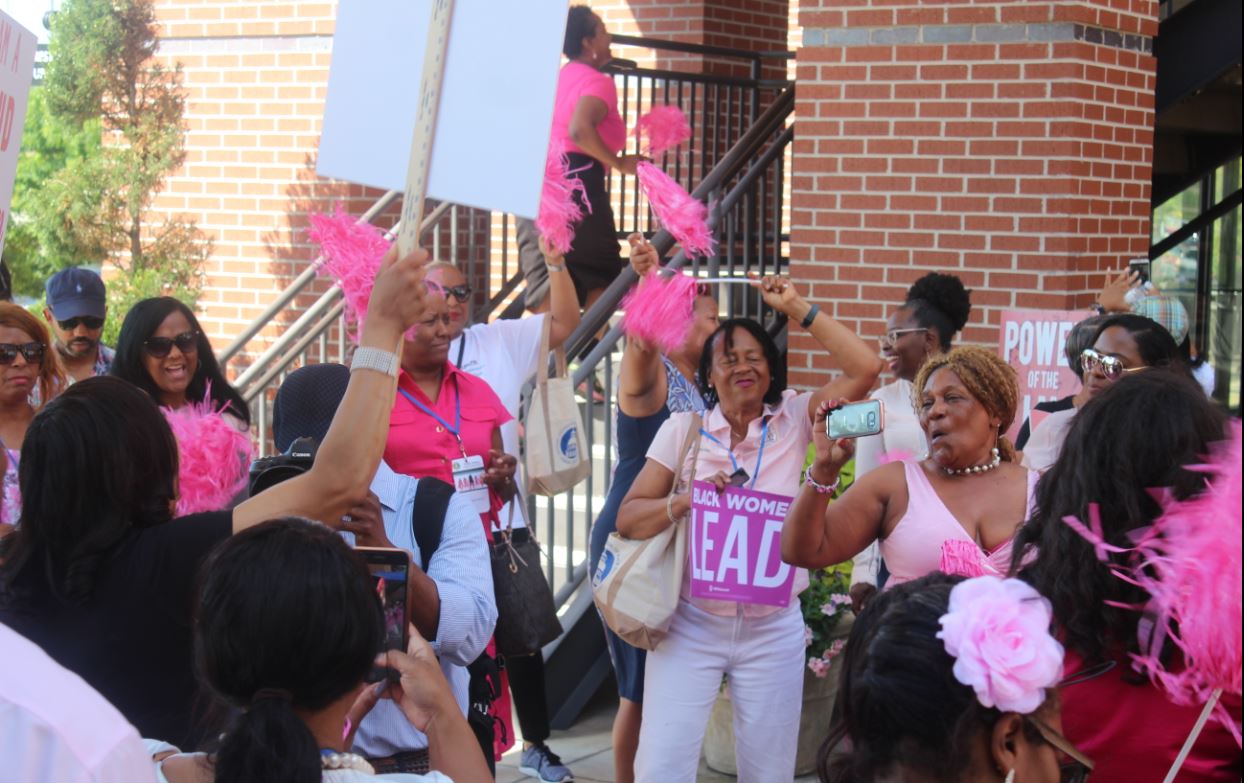 Dozens of elected women and supporters on Friday marched in downtown Birmingham from The Sheraton Hotel to Uptown for the Power of Pink Rally during the National Organization of Black Elected Legislative (NOBEL) Women Conference.

Officials from all over the country gathered in Birmingham for the 33rd annual conference which began Thursday.

“It’s a movement to broaden those who are sitting at the table through their tenacity, their leadership, but more importantly, through their mentorship,” Brazile said. “They have been able to elect women not just in the South, but across the country.”

More black women’s voices are being lifted in issues of importance to the country, Brazile said. “Ranging from dealing with the separation of children, they’ve been on the forefront of immigration, they’ve been on the forefront of education reform, criminal justice reform,” she said. “I’m here because I want to lend my support as I have for several decades to an organization that has meant so much to not just me, but to women across the country.”

“We started what I believe was a rise of black women recognizing their political power,” Brazile said. “If we can transform that and share it with millennials and others . . . they can bring change through the electoral process.”

“I tell a lot of folks . . . my favorite Shirley Chisolm quote,” she said. “’If you don’t have a seat at the table, bring a folding chair.’ And I also tell them, ‘when you get there, sometimes you’ve got to flip it over.”

Akbari also said, “It’s not enough for us to be at the table by ourselves if we’re not clearing the path for someone to follow behind us,” she said. “NOBEL Women has certainly does that. I have been fully embraced and every time I come here it’s like getting one big black mama hug and I love it.”

Maryland Delegate Angela Angel spoke of struggles women legislators have had in her state.

“We had #MDMeToo … in Maryland we had been suffering from rampant sexual harassment,” she said. “The problem was we didn’t have policies in place that protected us. There were a lot of hard nights but I heard from women who needed the legislature, someone to be honest about what has happened in the legislature.”

“I’m so proud of the work we did to protect the women,” she said. “I was so scared and didn’t know what to do, but I also knew about so many other women who were going through the same thing. I encourage you, if you are dealing with things in your state legislature, you can pass legislation that will make a difference and make change.”

Sen. Nikema Williams from Georgia talked about issues she faced to get her first bill filed.

“I showed up in the clerk’s office with my first bill, happy, excited,” Williams said. “The lady at the clerk’s desk looked at me and said, ‘The senator needs to sign his bill.’ I said, ‘I’m the senator.’ She said, ‘oh, I thought you were a mere aide… you look like a child. You’re a child to me.’ I said, ‘No, I’m a senator to you.’”

“She said, ‘I’m going to have to get used to you being here,’” Williams said. “There is a movement #WeBelongHere. We’re not going anywhere, and I want you to continue to remind people every time we step out in society that #WeBelongHere.”