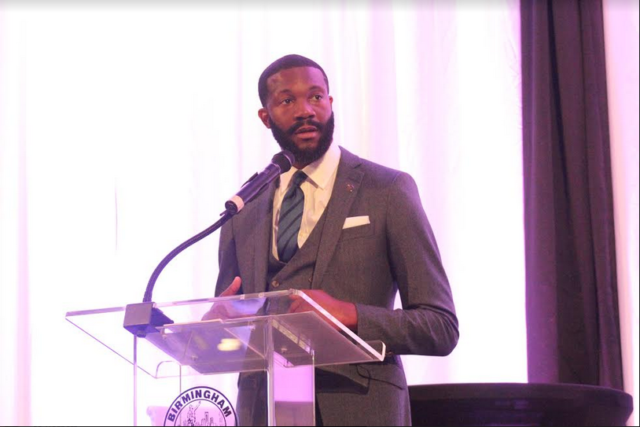 With the city grieving the loss of a Birmingham police officer, Mayor Randall Woodfin this week delivered a somber State of the Community address at the Boutwell Auditorium.

The Monday address came during an extremely tough time for the city: Earlier in the day Woodfin attended the funeral of former Birmingham mayor Larry Langford. Also, Monday, the Birmingham Civil Rights Institute (BCRI) apologized for a widely criticized decision to rescind an invitation to honor Angela Davis with its Fred Shuttlesworth Human Rights Award.

Woodfin began his address by saying that if he had to reflect on recent events “the truth is I think we can define what we’ve been experiencing the last few days as a state of warning for the city of Birmingham,” said Woodfin.

In recent months there has been a leadership crisis at Birmingham Water Works Board, the Birmingham Jefferson County Transit Authority and the BCRI, he said.

“But I want to assure you tonight, right now, our commitment is to demand strong, dependable, as well as transparent leadership,” he said. “And as your mayor I want you all to know I will fight for our assets, not because they are mine, but because they are ours.”

Woodfin said the city is riding off of the momentum of a successful 2018 which includes the removal of blight and more than 300 structures demolished since January of last year.

He said work has been supplemented by the new neighborhood revitalization fund with initial deposits of $1.4 million … “plus $4 million from budget savings we discovered through our focus on efficiency as well as effectiveness.”

Woodfin added that his administration has launched regular town hall meetings in each of the nine council districts providing residents a chance to interact with Birmingham leadership, “and offer a voice in shaping the neighborhood we live in.”

More meetings are scheduled this year, he said.

“While our focus is always outside of the four walls of city hall, we made several adjustments internally to better serve the 200,000-plus residents who live in our city,” he said. Woodfin added the city has invested in its current employees by reinstating the cost of living adjustments as well as longevity pay.

“And we are working hard to ensure that future generations…of city employees are taken care of, that’s why we’re working so hard to protect our pension because that really means protecting our employees,” he said.

He said right now he is working closely with the members of the pension board to come up with strategies to fully fund the pension.

He added that new leadership is in place in more than a dozen city departments and department heads have been charged with finding the best talent available to serve the city.

He spoke emotionally about the shooting death of police officer Wytasha Carter and the wounding of another officer.

“Sergeant Carter lost his life in a line of duty and another officer is in the hospital right now recovering. At a certain point in this community we are going to have to be fed up enough to speak out, to act against and fight the criminal element that’s in our city.”

The mayor said there were too many murders, shootings, and too many homes and vehicles shot into —
“collectively all three of those things combined tell me that violent crime in our city, gun violence, has to be declared a public health crisis in the city of Birmingham,” he said.

Woodfin added that the strategy has to be a three-pronged approach, “in addition to enforcement we have to talk about address and provide resources,” with prevention in one hand and addressing reentry in the other.

Combining those gets Birmingham to a space where crime can be solved in a different way in the community, he said.

He said Police Chief Patrick Smith arrived in Birmingham last June with a major shortage in police officers and has since hired nearly 40 officers and transitioned to an updated work schedule in all precincts. That means more officers on the streets at peak hour where crime is more likely to occur, Woodfin said. “But if chief was standing here right now, or any of his deputies, or any of his captains….they would simply tell you that flooding our blocks with badges is not enough.”

Woodfin said he’s looking to create more robust neighborhood watch programs with block captains. “Because what better way for us to work on prevention and enforcement than engaging folks who walk the streets daily … who I believe without a doubt can help us take back our streets.”

Woodfin said additional plans for the city of Birmingham can be viewed at www.birminghamal.gov/strategy.