The National Association of Black Journalists (NABJ) has put CNN on a “special media monitoring list” and plans to analyze the network’s practices surrounding diversity, inclusion and equity, the organization said Monday.

The organization issued a statement indicating its concern about “the lack of black representation within the ranks of CNN’s executive news managers and direct reports to CNN President Jeff Zucker.” 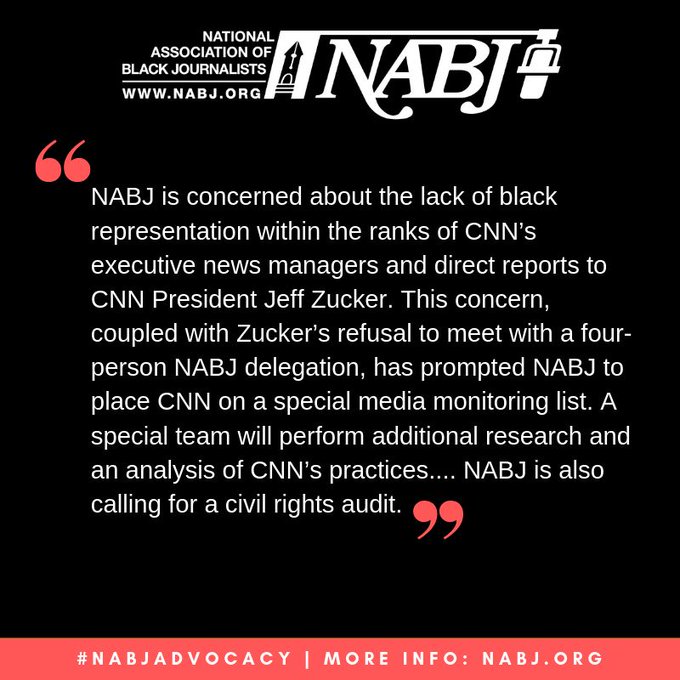 “The special team will also publicly report on identified deficiencies in hiring a diverse workforce in news decision-making capacities at CNN,” read the statement, which also notes that the organization is “calling for a civil rights audit” to examine CNN’s “hiring, promotion and compensation practices involving black employees.”

The statement said that CNN disputed one of those claims, telling NABJ that the claim that there aren’t any black vice presidents on the news side is false. The network did not offer specifics, according to NABJ’s statement.

NABJ said it was propelled to put CNN on the “special media monitoring list” looking into the network’s practices by both the lack of black representation and Zucker’s “refusal to meet with a four-person NABJ delegation.”

The organization said that Zucker is refusing to meet with the delegation “based on a personal issue between CNN and NABJ’s Vice President-Digital Roland Martin.” Martin is one of the four delegates who would have met with Zucker.

CNN told HuffPost in an emailed statement that the network would meet with other members of NABJ’s leadership team, but not Martin.

“Previously, former Democratic National Committee Chair Donna Brazile admitted, according to a Time essay, she inadvertently disclosed a town hall topic to the Clinton campaign that was part of Martin’s research inquiry for the town hall,” says the statement.

“For months, we have been working with NABJ to schedule a meeting because the relationship between CNN and NABJ is very important to us. As we have told them many times, we look forward to a thoughtful discussion about how both of our organizations can continue to work together,” the network’s statement read.

“Unfortunately, the significant and reckless damage that Roland Martin did to CNN while partnering with us during a 2016 Democratic Town Hall has made any meeting that includes him untenable. Mr. Martin displayed an unprecedented and egregious lack of journalistic ethics and integrity by leaking questions prior to the town hall. As a result, we have told NABJ that CNN will not participate in any meeting that includes him. We have made it abundantly clear that we would be more than happy to sit down with the rest of their leadership team as soon as possible, and that offer still stands.”

When reached for comment, Martin deferred to NABJ for a follow-up on CNN’s pushback.

In response to CNN, NABJ told HuffPost via email that it “anticipated” the network choosing to “divert attention away from answering the critical questions” asked by the organization.

“NABJ questions the ethics of excluding blacks from the ranks of executives on the news side of CNN. We chose to meet with Zucker despite those egregious findings. We did not demand that he be excluded from our meeting because of his record on diversity hiring. Likewise, we will not set a precedent and disinvite an NABJ board member from an advocacy meeting,” it wrote.

“NABJ’s focus is on diversity in media and not personal issues. Zucker’s refusal to meet begs the question: Is CNN focused on diversity? We are still requesting answers to the above questions along with a meeting with Zucker on how our organization can help in CNN’s needed efforts to diversify news leadership.”

Members of the media have responded to NABJ’s statement on Twitter and have offered their two cents about the claims made:

This is important. Time for media outlets to address lack of diversity in leadership.

This story has been updated with a response from Martin and additional comment from NABJ.