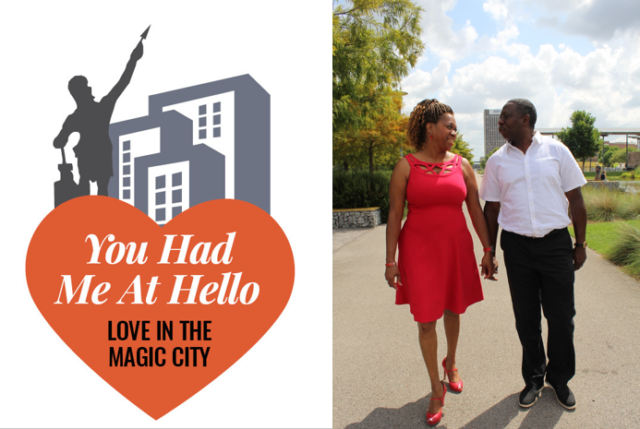 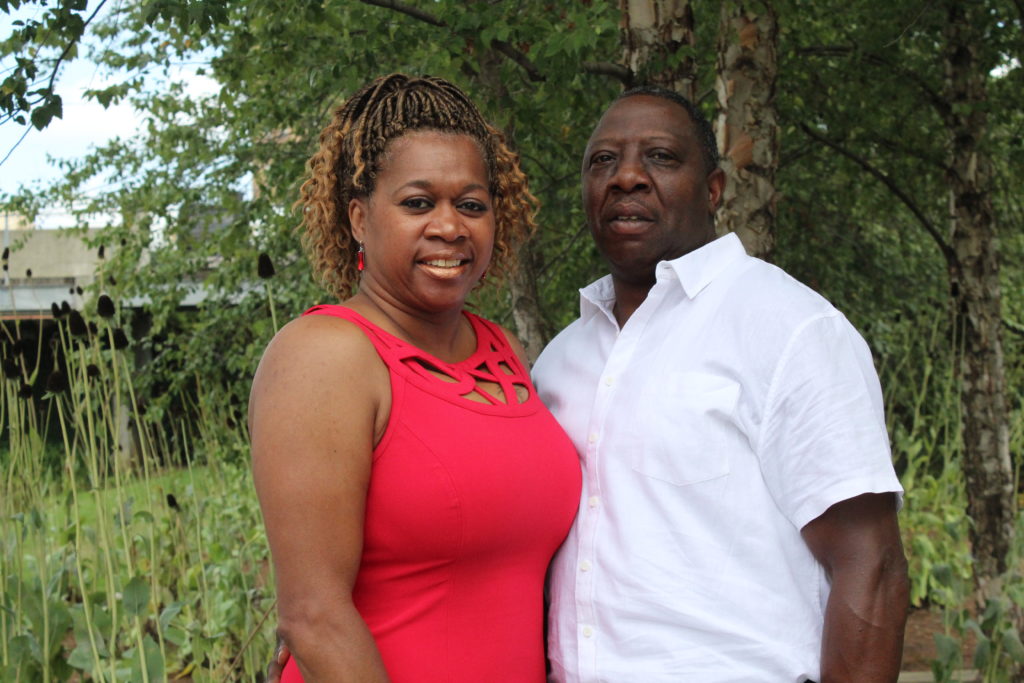 Met: Jewell and Roderick first became acquainted at Harris Park in West End. Jewell was a part of the P.A.T. (Police Athletic Team) softball team. “I was playing first base, and he was a spectator,” Jewell said, “I noticed him watching me, but we didn’t meet until [the following weekend at] the Holiday Skating Rink on Green Springs,” she said.

Roderick, then 21, admitted to taking notice of Jewell but said it was Jewell, then 17, who couldn’t keep her eyes off of him. “…I felt somebody staring at me at the skating rink . . .” he remembered.

“He was a good skater back then, and that is what caught my eye,” she said.

The two exchanged numbers and kept in touch – “but we didn’t go together or anything, I went off to college [Alabama Agricultural & Mechanical University], and he stayed here and was going to Miles College,” Jewell said, “we met back up when I came home from school after graduation.”

“I never quit thinking about her,” Roderick said, “I was pursuing her while she was in college, I used to tell all her friends that I was going to marry her.”

First date: It was summer 1990, Jewel was home and recently graduated from college when Roderick invited her to Six Flags over Georgia. Although initially skeptical at the gesture, “I had one eyebrow up in the air,” Jewell said, “but I love Six Flags so I was like, ‘wow, ok, let’s go…we hit it off, we had a real good time.”

“The drive was nice, good conversation…we were talking about the rides we were going to get on, what we were going to eat…we got on one ride called the Scream Machine, and she lost her hat, it flew off,” Roderick said. “I offered to go look for it, but it was a lost cause,” he laughed.

The turn: The couple spent the rest of the year getting to know each other better.

“We found out we had a few things in common, and shortly after that, he proposed,” Jewell said. “I don’t believe in long engagement either… .”

“I’m glad she didn’t because I was already head over heels for her,” Roderick said.

“She was the love of my life and I didn’t want no one else to have her,” he said.

The proposal: Roderick proposed in March 1991. The pair were out to dinner at a restaurant in Five Points South. “It wasn’t nothing fancy… I had been contemplating when I was going do it and how I was going to do it,” he said.

“I wanted to be traditional, I meant to ask her dad first, but I did get down on one knee,” he said. “I asked her, ‘will you do me the honor of being my wife for the rest of my life?’”

“I accepted right away,” Jewell said. “I went right into planning mode.”

Their families were already on board, Jewell said. “My aunt, my family, they thought he was a nice guy, so we immediately sat down together with our family’s and we all agreed that the week of his birthday [July 1] would be perfect for everyone.”

The wedding: The Arringtons were married at First Baptist Church of East Lake. Their colors were red, white and black. 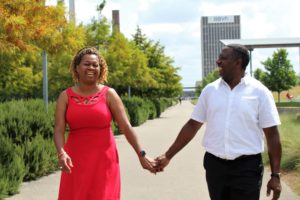 Most memorable for the bride was early panic. “We were scared my daddy wasn’t going to make it in time to walk me down the aisle,” Jewell said. “But he did, and when we were announced as husband and wife, he [her dad] was crying too.”

“We all cried,” Roderick added.

“I started shaking,” he said. “I was ready to get it over with. But when she got closer to me it got easier.

Words of wisdom: “Communication and enjoying each other is important, you have to keep the spark alive,” she said. “You have to date each other, take mini trips, share in doing things that both of you like. You have to work together in a marriage.”

She added: “In order to overcome the challenges we have to keep God first in our lives. We attend church [Living Word Baptist Church, in Birmingham] together regularly, we pray together and we pay attention [to one another] and help each other reach our goals,” she said.

Said Roderick: “You have to be honest…you always need to keep an open, honest line of communication, and always put God first. You have to pray together.” Also, “keep it exciting, you must keep courting each other,” he said.

Happily ever after: The Arringtons have been married for 28-years and have two sons, Roderick Jr., 26, and Javaris, 23; and two grandchildren, Skylar, 7, and Mason, 5.

Jewell, 52, is an Ensley native and Ensley High School alum. She attended Alabama Agricultural and Mechanical University, earning a Bachelor’s of Arts Degree in finance and is a member of Delta Sigma Theta Inc. Jewell works as a Mortgage Closing Analyst for a local bank.

Roderick, 57, is a West End native, and Woodlawn High School grad. He attended Miles College, and works as a warehouse manager. Roderick said they want to continue to travel and check off items remaining on their bucket list: snow skiiing, going to Hawaii and hitting the lottery.