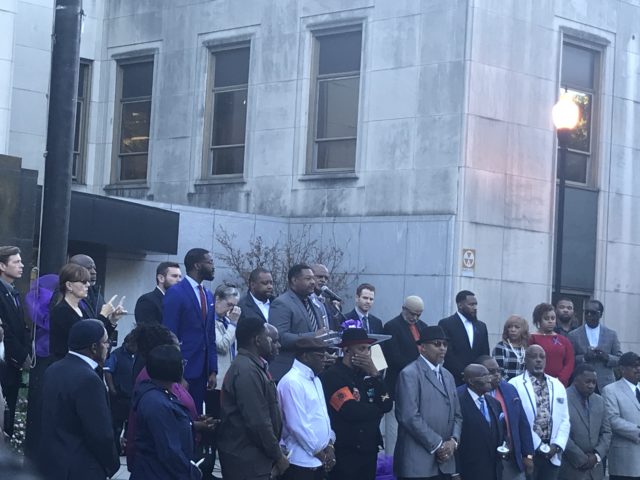 Kamille, the 3-year-old girl who was abducted in Birmingham on Oct. 12, was found inside of a dumpster at a landfill on Tuesday.

During a candlelight vigil for the little girl in downtown Birmingham, Smith said Kamille was able to accomplish something many couldn’t do in a lifetime.

The child, known as “Cupcake” to relatives, vanished while outside a birthday party in the Tom Brown Village housing community.

Smith said the city was a little different before Kamille’s abduction.

“Ten days ago, I felt that we were a very different city,” the chief said. “Maybe we were a little bit too carefree; maybe there is more we could have done to watch over this little child. But today we’ve come face to face with the hurt, the pain and loss of a beautiful little spirit. Let us not take this moment for granted; let us not take these lessons of devastation for granted.”

One way the city has changed is that citizens should “never let our children out of our sights,” Smith said. “Let our eyes be eyes of caring, of passion, of love and compassion for children,” he said. “Let your concerns be heard and watch over your neighbors and your neighbor’s children and we will be a better city.”

The program began beneath a slowly fading sun and in a slight breeze with Mayor Randall Woodfin saying, “we are all Kamille’s family” and introducing the speakers.

William Parker, who was elected by his colleagues as the new Birmingham City Council President on Tuesday, was the first to speak.

“We are truly hurting as a family, as a city; these are tough times but we are going to pull through this,” Parker said. “It is going to take all of us collectively working together to make sure we support the family.”

Parker was followed by Smith who said his officers wanted nothing more than to bring Kamille home safely and “worked endlessly to do that . . .I can’t imagine the pain of the family of Kamille but I want them to know that we as a family stand with them.”

Lawyers for both have said they are innocent.

Wednesday’s vigil was a diverse gathering of people from across the Birmingham metro area including various faith-based leaders that included Rev. Julia Conrady, of Unitarian Universal Church of Birmingham; Minister Ashfaq Taufique, of the Birmingham Islamic Society; Rabbi Adam Wright, of Temple Emanu-El and Pastor Mike McClure, Jr. of the Rock Church.

Erica Wright contributed to this story.