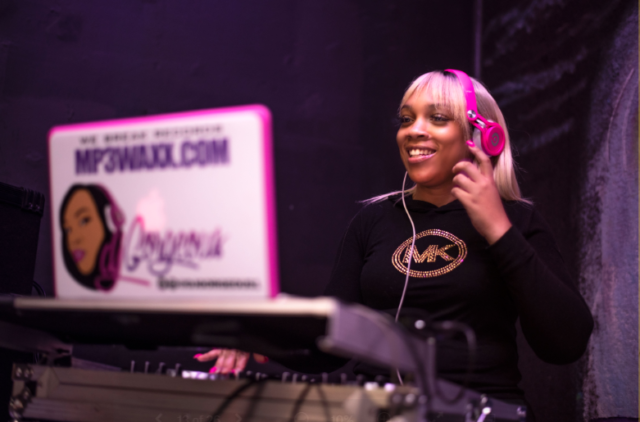 Thirty-four-year-old Aisha Stroud, from Birmingham’s Eastside Kingston neighborhood, is known as DJ Gorgeous. While attending Woodlawn High School, she was a promoter for the now-closed Valley Skate Center, a roller skating rink that was located at the corner of Valley Avenue and Green Springs Highway. When there were parties at the venue, she spent some time behind the DJ, but she spent even more time on the floor watching how people reacted to the music.

“I enjoyed [the DJ’s] music selection and transitions. I just listened from a distance, looking at and admiring his equipment at times. I might have watched maybe once or twice,” said Stroud, who started her DJ career at Auburn University, where she was a student between 2003 and 2009.

“[DJ Hardwork] taught me how to set up the equipment, as well as the basics of mixing and blending,” Stroud said. “DJ Serious … [taught me] the basics strictly off of vinyl.”

Like many female DJs, Stroud considers Spinderella of Salt-N-Pepa an early role model.

“I just really [wanted] to be a DJ,” she said. “There aren’t a lot of female DJs, and I like Spinderella, so I was like, ‘Let me learn.’ … You’re so used to seeing male DJs, not female DJs. … I wanted to be able to have people, when they leave whatever vent, [say] ‘I had so much fun.’ That’s why I do it. I want [people] to feel like they just enjoyed themselves. Music can take your mind off of whatever stresses you’re going through in life.”

Stroud has had some run-ins with men who were intimidated by her, particularly one guy who was trying to learn alongside her.

“It was like a competition [for him], but I didn’t look at it as competition; I was just trying to learn,” she said. “With any male-dominated field, [some men] feel like we can’t do their job. … At the time [I had this run-in], I was so young, and I didn’t understand why this particular guy was trying to do everything … in his power to [keep me from] getting ahead. I sometimes still kind of see it now.”

Women can bring something that men can’t, Stroud said: “We can cater to the men and the women. … We can say the women look great—‘There are some sexy ladies in here!’ We can also say there are handsome men [at the party]. … We can relate to both genders without being judged.”

Women have to be careful, too, she said. Just because a woman has friends in the industry, people will assume she’s sleeping with different people.

“As a young woman who has other young women following them, … [a female DJ] has to be careful about how she portrays herself,” said Stroud, adding that it’s important to stay focused.

“This is your passion, so keep doing as much as you can. … At the end of the day, … if you’re doing everything [the right way] … and then you hear negative comments, … that means you’re doing something right. Stay true to yourself and just keep pushing. … Don’t give up.”

It’s also important to see people leave an event happy, Stroud said: “I love seeing people happy because when you see other people happy, it makes you happy. It puts enjoyment into my life.”

With the holiday season here, Stroud balances gigs with vacation and family time.

“If the gig makes sense, I take it, but I always make time for my family,” said Stroud, who has a 9-year-old son. “You have to learn how to balance the two. Is the gig worth my time? How would it be beneficial to me as well as to the client? Pay is factor, time is a factor, location is a factor.”

As for memorable events, Stroud said every event has its own special memory—from the people you meet to the connections you make.

“Some [of my best] memories are of watching people enjoy themselves and dance all night,” she said.

Follow DJ Gorgeous on Instagram at @djgorgeous1; email her at djgorgeousbookings@gmail.com and iamdjgorgeous.com; and listen to her mixes on 95.7 Jamz (WBHJ-FM) on Mondays at 5 p.m.