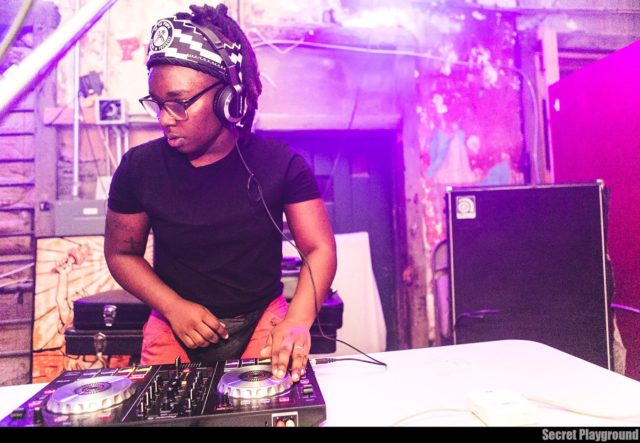 Shante Wolfe-Sisson, known professionally as Blk Alchemy, is a 25-year-old DJ who has always had a love for music. That passion turned into a much-needed mental-health outlet while Wolfe-Sisson attended Savannah State University, in Savannah, Ga., from 2012 to 2014.

“I started spinning just for practice, and then slowly but surely I started DJing for sponsored events, for nonprofits, and specifically around social-justice issues. I usually [work] social-justice-themed events,” said the DJ, who was featured at the first Birmingham Black Pride in August 2018.

Wolfe-Sisson also DJs for Trap Yoga, a class during which participants do yoga to trap music, a popular style of hip-hop that originated in the South. The DJ also has made playlists for Shut Down Etowah, a campaign made up of individuals and civil, immigrant, and human-rights organizations based in Alabama and across the country committed to ending the abuses at the Etowah County Detention Center.

“Anything that has to do with justice, that’s where my music goes because I feel like … we don’t really have an outlet to just enjoy ourselves or let those frustrations play out in the form of a track,” Wolfe-Sisson said. “That’s where I feel like my music comes in. … That’s sort of where I found my niche, and I stayed there.”

After leaving Savannah State in 2014 because of homophobia, Wolfe-Sisson moved to Alabama in 2014, where Wolfe-Sisson was exposed to more social-justice efforts through doing low-level volunteer tasks for a community garden in Tuskegee. Soon, Wolfe-Sisson learned about the direct correlation between rural areas not having access to basic amenities, such as fresh produce or an emergency room. For example, Tuskegee has only one grocery store, and the nearest hospital is in Auburn.

“I wanted to have a larger role in making a difference in communities statewide. Music stands in the gap and serves as political commentary for those who feel as if there are things they can’t say.

“Artists can say those things because it’s catchy, because they can sponsor it and make money off it somehow. At the end of the day, though, I really feel like musicians and artists have a lane and a niche [to say things] a lot of people can’t say for various reasons. I feel like [the music] is our last line of defense.”

Wolfe-Sisson’s turntable skills evolved at home in Birmingham, starting out using virtual-DJ software to learn the ropes and then buying the popular DJ software Serato and a set of Pioneer turntables as a result of needing an outlet.

“I like the opportunity to be able to manipulate tracks and blend them into the perfect paragraph of what I can’t say out loud. That’s what I do with DJing; I mix different instrumentals with different beats,” said Wolfe-Sisson. “For most people, if they don’t remember anything else about the party, they remember if the DJ was wack or not.”

Wolfe-Sisson turned the corner as a DJ by becoming “better in transitioning and beat-matching and not relying on the auto-cue button on my CDJ, [a specialized digital music player for DJs].”

Wolfe-Sisson is influenced by hip-hop and R&B producer No I.D., who has done tracks for a broad range of artists, including several hits on Jay Z’s Grammy Award–nominated “444” album. Other influences are Thunder Cat and Flying Lotus, who did the music for Cartoon Network’s Adult Swim and Toonami programming; Wolfe-Sisson considered them important because they served as examples of blackness that was acceptable outside of what was popular.

Seeing examples of “the weird black kid”; following the early careers of artists like Donald Glover, also known as “Childish Gambino,” and Tyler Gregory Okonma, who uses the moniker “Tyler, the Creator”; watching eclectic musicians become mainstream made Wolfe-Sisson feel a little more comfortable about being the “weird black kid at school.”

“Making it in any form was important to me,” said Wolfe-Sisson. “My sound specifically caters to people who feel they cannot fit in. … Even when going out, sometimes the awkward black girl may not feel comfortable going to certain spaces because of ‘-isms’ or not being black enough. … I don’t want people to feel that way in my spaces if I can help it. … Those are the people I want to continue to reach because they are the ones who slip through the cracks. I would have slipped through the cracks if it weren’t for music.”

According to Wolfe-Sisson, women who DJ can offer a mirror to show that there’s still misogyny that has to be dealt with.

“Basically, the same things women would experience in any other field of work happen in DJing, too,” Wolfe-Sisson said. “But I think women can bridge the gap in a lot of conversations. … Maybe we need to realize that we have more power if we tap into music. Historically, [for instance], here in Birmingham … the [radio] DJs let people know when the [Civil Rights] protests were [taking place].

“I feel like we can tap back into that power as women and bridge the gap between some of these conversations we’re not having about our families, about the quality of life for people here in Birmingham.”

Being androgynous, Wolfe-Sisson deals with a unique type of misogyny and other “-isms.”

“[It’s] belittling because … there’s some homophobia at play or it’s just the same old, same old. [People] don’t talk to you, they don’t really look at you, or they try to pay you less,” Wolfe-Sisson said. “I think we should respect all women DJs, and not women DJs that just fit a particular eye gaze. I think women should be able to present themselves in a bucket if they want to [while] they DJ—[as] long as they’re good.”

With the holiday season approaching, Wolfe-Sisson said Christmas is heavier than New Year’s Eve due to holiday parties.

“I rarely do New Year’s because I like to take that time for personal reflection. … I decide where to perform based on whether or not the promoters are LGBT-friendly and whether there’s a social-justice component, as that’s my niche market,” Wolfe-Sisson said. “I prioritize those before a party at a local club.”