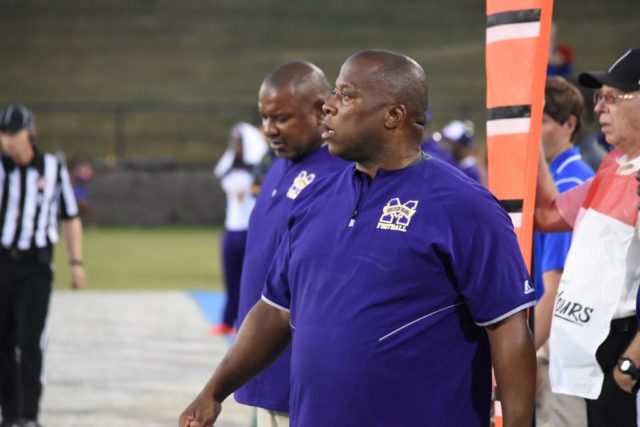 Miles College has spent this week preparing for their playoff run. The Golden Bears, a No. 7 seed, will face the No. 2 seeded Lenoir-Rhyne in the first round. The game will be played on Saturday, Nov. 23 at noon in Hickory, N.C.

Miles College head coach Reginald Ruffin also has been named Southern Intercollegiate Athletic (SIAC) Coach of the Year for the third time, adding the award with those won in 2011 and 2015. This season, Miles became the first team in the SIAC Championship Game Era to win back-to-back league titles which was the fourth in his career. The Golden Bears, who led the league in total offense and was second in total defense, have gone 9-2 and set a school record for victories.

The Golden Bears have done a lot of great things along the road to the conference championship which they secured with a 21-6 victory over Albany State in the title game. They have played good defense along with a strong running game. Miles College has done quite well with its ground attack led by Donte Edwards and Justin Ruiz.

In the conference championship game, Edwards and Ruiz came up huge in the run game. Edwards scored three touchdowns while rushing for 105 yards on 26 carries. Ruiz had 23 attempts for 95 yards.

In the postseason, the teams that can control the line of scrimmage and provide a steady running game usually put themselves in a good position to win. Miles College’s rushing game that could make a difference in the playoffs. If the Golden Bears can run the football, limit their turnovers and play good defense, they could advance to the next round.

The game caps a season where six members of the Miles football team have been named to the 2019 All-SIAC football team.

Offensive linemen Roger Womack and Aaron Scroggins and defensive lineman Jaylun Thomas were first team selections. Linebackers N’Ktavious Floyd and Mitchell Smiley and tight end Montavious Tinch made the second team. Ruffin was voted Coach of the Year with all picks made through voting done by the conference’s media relations professionals and head football coaches.

Thomas, a junior from Sylacauga, earned his first selection. A preseason second team selection, Thomas has 42 tackles, 11.5 tackles for loss, 5 quarterback hurries, 4.5 sacks, a forced fumble and a fumble recovery. His is currently among the top-10 in the SIAC in tackles for loss and sacks. He also earned a SIAC Defensive Player of the Week award for his performance against Kentucky State, where he had 14 tackles, 4.5 tackles for loss and 2 sacks.

Tinch, a junior from Elberton, Ga., makes his first All-SIAC postseason team. A preseason second team selection, Tinch started all 11 games for Miles. He currently has 14 catches for 128 yards and a touchdown while also serving as a solid blocker for the Golden Bears’ rushing attack that is averaging nearly 200 yards per game.

Smiley, a sophomore from Huntsville, Ala., earns his first postseason honor. He leads Miles in tackles (69) and tackles for loss (12.5) and is second in sacks (5). Smiley also had 4 pass breakups, 2 quarterback hurries, a forced fumble and an interception. He earned one SIAC Defensive Player of the Week award this season.

Floyd, a junior from Phenix City, Ala., also earns his first postseason honor. Floyd currently has 55 tackles, which is second on the team. He, along with Smiley, is in the top-10 in the SIAC in tackles for loss (11) and sacks (4). Floyd also has 3 quarterback hurries, a pass breakup and 3 interceptions, 2 of which he returned for touchdowns, which leads the conference. His 97-yard Pick Six turned the tide in Miles’ win over Tuskegee to clinch the Western Division title and earn him BOXTOROW National Player of the Week honors. He was also named SIAC Player of the Week when he registered 10 tackles (eight solo), three tackles for loss totaling 18 yards, and a sack while coming off the bench in Miles’ 24-21 win over Benedict.

In the Southwestern Athletic Conference (SWAC) action last week, Alcorn State topped Alabama Agriculture & Mechanical, 34-28. Although the Bulldogs lost a tough one to the Braves, Alabama A&M running back Jordan Bentley had a big day. He set a school record by getting the most rushing yards in a game picking up 243 yards on 29 carries.

Bentley also scored four touchdowns. In addition, he set a new Alabama A&M mark for the most rushing yards in a single season. Bentley has gained 1,307 yards on 251 carries this season.

Alabama A&M will host Mississippi Valley State on Saturday, Nov. 23 at 2 p.m. in its final game of the season.

Alabama State University went out of conference to face Florida State University, but came up short in a 49-12 loss to the Seminoles on the road. Hornets quarterback KHA’Darris Davis had a solid performance connecting on 27-of-39 passes for 262 yards with one touchdown and an interception.

Alabama State’s next game will be at home on Thanksgiving on Thursday, Nov. 28 against Prairie View A&M in the annual Turkey Day Classic. The kickoff will be at 2 p.m. at ASU Stadium.