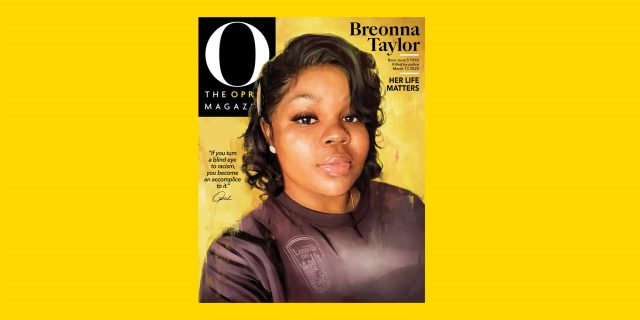 Oprah Winfrey has dedicated the cover of the latest issue of her magazine to Breonna Taylor, a 26-year-old EMT who was killed by police in Kentucky on March 13. It is the first time in its 20-year history that an O magazine cover has not featured Winfrey.

The magazine has in the past featured other people on the cover alongside Winfrey — including Michelle Obama and Ellen DeGeneres. But the new cover features a solo shot of Taylor in a Louisville EMS shirt, which was recreated by 24-year-old artist Alexis Franklin, according to the O magazine Instagram page.

In an article for the magazine, Winfrey explains her decision: “Breonna Taylor. She was just like me. She was just like you. And like everyone who dies unexpectedly, she had plans. Plans for a future filled with responsibility and work and friends and laughter,” Winfrey writes.

Winfrey writes that she recently spoke to Taylor’s mother, Tamika Palmer, who said: “I can’t stop seeing her face. Her smile. It’s what I miss most about her. I still can’t grasp the concept of her being gone. It feels so surreal. I’m still waiting for her to come through the door.”

Just after midnight on March 13, three Louisville police officers entered Taylor’s home with a search warrant in a drug investigation. They opened fire and killed Taylor while she was asleep.

There has been widespread activism drawing attention to the case, calling for charges to be brought against the three officers involved.

“Pleas for justice have fallen on deaf ears,” Winfrey writes. “As I write this, in early July, just one of the three officers involved has been dismissed from the police force. This officer blindly fired ten rounds from his gun, some of which went into the adjoining apartment.”

Winfrey writes that Palmer can’t understand why no one has been charged in her daughter’s death. “They did all of this for nothing, and she lost her life,” she said, according to Winfrey.

In the piece, Winfrey also shares more about Taylor and who she was as a person — a car lover, someone who appreciated music, a force in the life of her 20-year-old sister, and an an emergency room technician. “Breonna Taylor was saving to buy a house. Breonna Taylor had plans. Breonna Taylor had dreams. They all died with her the night five bullets shattered her body and her future,” Winfrey writes, adding that she thinks about Taylor often.

She also writes that Taylor was the same age as two girls from her school in South Africa, who have been quarantining with her since March. “Their whole lives shine with the light of hopefulness. That was taken away from Breonna in such a horrifying manner,” Winfrey writes.

Winfrey also includes ways in which readers can continue to fight for justice, including signing a Change.org petition, calling government officials and donating to the Louisville Community Bail Fund. “We have to use whatever megaphone we have to cry for justice,” she writes. “And that is why Breonna Taylor is on the cover of O magazine. I cry for justice in her name.”