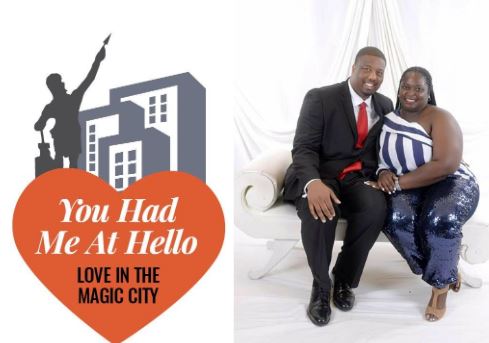 Met: August 1996, in front of Anthony’s dormitory at Savannah State University (GA). It was move-in week and Anthony spotted Sharis sitting in the courtyard with a group of people and said the only thing on his mind was “getting to know her and seeing if she needed a massage. It was moving week, and she looked tired so I wanted to help out,” Anthony laughed.

Sharis said she accepted his offer. “It was an appropriate massage, nothing fancy, hands stayed right where they should’ve been,” she said. “He was standing behind me and tapped me on the shoulder and asked if I wanted a back massage, and I said sure. We started talking and having conversation with each other.”

“At the end of it she had to pay for it with a kiss on the lips,” said Anthony. Sharis said she paid with no problem.

First date: September 1996, on the beach on Tybee Island [Savannah, GA]. “We just walked on the beach getting to know each other and we spent most of the evening on the swings, talking and having a nice time,” Sharis said.

Anthony said it was a spur of the moment date. “I asked her if she wanted to go around to the beach and she said yeah. The cool thing was when we were leaving, we left holding hands walking back to the car.”

The turn: By October of ‘96, Anthony had proposed. “He went home and found his grandmother’s pink gem ring and gave it to me as a promise to wed,” Sharis said. “Nobody knew, our families didn’t know,” she said.

By March ’97 they were inseparable. “She had an aunt that lived in Savannah, and we asked her [Aunt Classie] if we could stay with her over spring break, we haven’t separated since,” said Sharis.

The proposal: In her Aunt Classie’s living room during the March 1997 spring break.

“Her parents had moved out of the country and I needed her aunt to make that long distance phone call to Malaysia where her parents were living so that I could get permission to have her hand in marriage,” Anthony said. “I got permission while Sharis was working her part-time job, and when she came home that night, I asked her to marry me in the living room.

“I got down on one knee in front of her and said ‘hey Sharis, I love, you, will you marry me? But I want you to know that I’m not asking you to marry me now, I just want you to promise that you’ll marry me in the future’.”
“I was shocked,” Sharis said. “That’s when he let me know that he had reached out to my mom overseas and asked permission. I didn’t know that he had talked to my mom or anybody, and I remember sitting there looking at him in shock and started crying and said ‘yes’. The effort that he took to coordinate the call at such a young age was special. I felt valued….”

The wedding: At the historic First African Baptist Church in Savannah, GA, officiated by Reverend Thurmond Tillman. Their colors were gold and ivory.

“We love rich history and that church is the oldest African American church in the country, and was part of the underground railroad… We were members there,” she said.

Most memorable for the bride was during the vow exchange. Anthony said some dust got in his eyes, “but I say he began to cry,” Sharis laughed. “The pastor handed him his handkerchief to ‘help get the dust out his eyes’, but I remember tears. That lip was quivering too, not sure how allergies affected his lip, but 22 years later he’s still sticking with the same story.”

Most memorable for the groom was when Pastor Troy’s ‘We Ready’, was played at the reception, Anthony said. “That was our song, and when the DJ put that on we got up from the table and started dancing and everyone got up and joined us. We danced for the rest of the night.”

The couple honeymooned a year later in Hilton Head, South Carolina. “We couldn’t go for a year because Anthony manned his first post as a police officer in Savannah, GA the Monday after our wedding,” Sharis said.

Words of wisdom: “For me, it’s not going to bed angry. Anthony taught me that because he’s like no matter how mad one of us gets, you’re going to get in the bed and you’re going to cuddle at the end of the night,” Sharis said. “Sometimes it seemed it was to further aggravate me, but eventually I’d give in and wouldn’t be upset anymore. Unless it was significant, it led to us being able to have disagreements and move past little spats easily…”

“The key for us is simple, we make love an everyday action regardless of what happens, whether we agree, or disagree, love was always the action behind everything that we did…,” Anthony said. “If anybody can tell me that I’m wrong, or stupid or doing something great, it’s going to be her and I’ll know that it’s not coming from a negative place, but that she’s telling me out of love and not spite.”

Sharis, 42, is an Augusta, GA native, and Cedar Hill High School [GA] grad. She earned an associate’s degree from South University [Savannah GA], a bachelor of arts degree in communications from Southern New Hampshire University [Manchester, New Hampshire], and works as a Regional Quality Assurance Manager for Grifols INC [headquartered in Los Angeles, CA] and works from home when she is not on the road.

Anthony, 42, is a Charleston, South Carolina native and Middleton High School grad [Charleston]. He attended Savannah State University [Savannah, Ga], where he studied criminal justice and is a police academy graduate in Savannah, GA. He is currently an area manager for a national security firm in the Hoover. 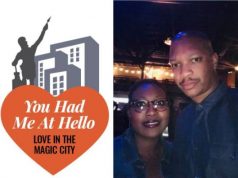 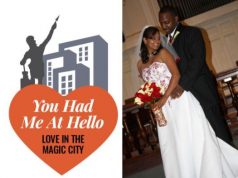 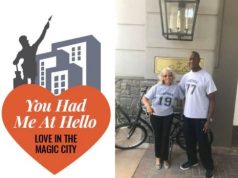