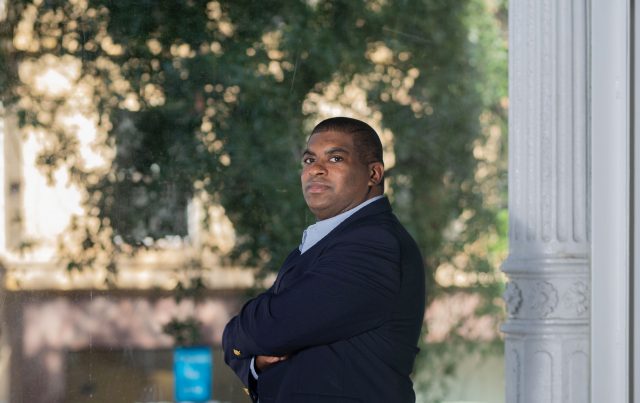 By the time he was in his 20s, Jeremy Duckworth was on his way to creating economic development opportunities for urban and rural communities.

His experience goes back to his first business, which he started while enrolled at the University of Alabama (UA) in Tuscaloosa.

“It was a marketing business called Neighbor Foundation, and it was through Amway, [a multilevel marketing company that sells health, beauty, and home care products],” said Duckworth, who was 20 at the time. “That taught me so much about people.”

Duckworth found that “most people are afraid of trying something new or different, and they cover it up with overaggression. … So, how do you deal with and manage that? … That is basically leadership and management, and also sales. I learned a lot from that.”

While at UA, Duckworth started his second business, as well—Alabama Golf Greens, a company that installed golf greens in residential communities. He was 23 and assisted by two friends: Hunter Strickland and Luke Allen.

“If you wanted a putting green in your front yard, we would install it for you,” he said.

“I was making more money than a lot of the people graduating from UA, and I left [in 2006 or 2007] to focus on my business,” Duckworth added. “I started those businesses not because I was some brilliant person [but] because my grandparents and parents were amazing people, and I had time to dream. I didn’t have to worry about tuition or where my next meal was coming from because they laid a great foundation for me, so I had time to start my businesses.”

Duckworth, now 37, was living in Tuscaloosa, with parents paying part of his tuition, when he started his first business ventures. His grandparents were also an influential part of his life and upbringing, instilling values in him.

Duckworth, an only child, was born in Taylorsville, Mississippi.

“My dad, Steven, was a field tech for a gas company back in that time, and my mom, Patricia, was a schoolteacher,” said Duckworth. “I had an extremely privileged background. Every toy you could think of, I had it. I had a [black pickup truck] when I turned 16. … It was ridiculous how spoiled I was because I was the only child and youngest grandchild. My parents and my grandparents on both sides spoiled me.”

When Duckworth was 5, his family moved to Tuscaloosa, Alabama, where he attended Alberta Elementary School, Westlawn Middle School, and Central High School. Duckworth played baseball in high school and was also on the debate team.

“I even went to Emory University [in Atlanta, Georgia], not for college but for debate camp,” he said. “The first time I went, my debate team won second in the overall tournament. I was really proud of that.”

After graduating from high school in 2002, Duckworth attended UA, where he majored in marketing and management and started creating his businesses.

While running Golf Greens for about six years, Duckworth also worked at an Alabama-based credit union as a membership representative before moving into a financial services officer role.

“I worked there for about three years,” he said. “Then I got recruited to work for a [technology] company in Mississippi, and my territory was Alabama and half of Georgia.”

While working with the tech company, Duckworth embarked on a path toward helping small businesses, especially in urban areas. He started researching Black history and learning about Black Wall Street, the moniker given to an area that thrived as the epicenter of African American business and culture, particularly on bustling Greenwood Avenue, in Tulsa, Oklahoma

Black Wall Street was obliterated during the 1921 Tulsa Race Riot, two days of mayhem that resulted in the destruction of numerous Black-owned homes and businesses and the deaths of hundreds of Black residents at the hands of a white mob.

Duckworth also read books like “The Road to Serfdom,” by economist and philosopher Friedrich Hayek, whose work points out, among other things, the best system of economics.

He would eventually talk to a guy named Frank Woodson, executive director of Mission Alabama, a group that works to address the needs of the most vulnerable in the Greater Birmingham area by connecting businesses, government, and faith- and community-based organizations.

“When [Woodson] drew this ecosystem, I was like, ‘I want to do that. I want to build that. I want to be part of that,” said Duckworth, who then formed both a Chamber of Commerce in Fairfield and the Western Community Redevelopment Alliance (WCRA).

“We built the Fairfield Business Alliance, and that showed there were other areas that needed help as far as economic development,” said Duckworth. “We also talked to business owners in the area and [in 2017] started the WCRA, which focuses on building economic development opportunities in the western areas of Jefferson County, including Fairfield, Brighton, Lipscomb, and West Birmingham.

With the success of the WCRA, Duckworth wanted to expand.

“I was talking with a guy who was like, ‘This thing is too good to keep over in western Jefferson County. There are other people who need help.’ He told me I couldn’t call it ‘Western.’ I said, ‘You’re right.’ Then I thought of [CARA], which was launched in September 2020.”

“We do that through best practices,” Duckworth said, explaining that participants are asked: “What do you need to get ready? How do you sell your area to a potential business? What do your economic development boards look like now?”

Once that is done, participants are taken through one of two accelerator programs: the Western Small-Business Accelerator or the Central Alabama Accelerator.

With the help of co-founders Lakami Baker, Ph.D., Lisa McKinney, and Corey Bishop, the Western Small-Business Accelerator launched a nine-month training program through which participants attend several different workshops for each phase of the program, getting hands-on help and learning best practices. The Central Alabama Accelerator is for businesses that have been around for six months.

“Without a foundation, people are lost,” he said. “I think people want to do good and be good, but they don’t know what to do because no one ever taught them. I believe that without increasing capacity for businesses and people, we’re always going to be lost”—and Duckworth is doing his best through CARA to help small businesses find a path to success.

While devoting time to supporting local businesses, Duckworth also devotes time to his family. He is married to Jennifer Elizabeth Duckworth, who runs her own business, Neighbor Foundations, and is a homeschool mom; they have three children: Alexander, 10, Carleigh, 7, and Phoenix, 5.