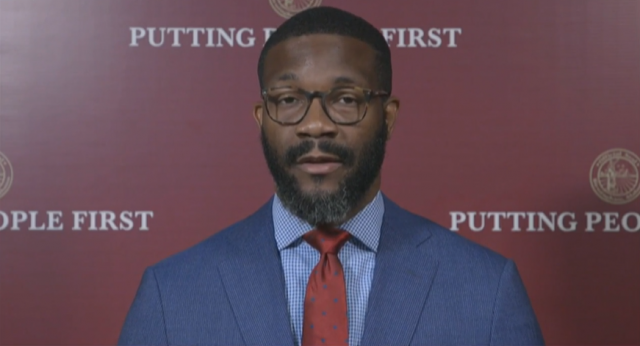 Less than 24 hours after the Birmingham City Council approved his $455 million FY 2022 operating budget, Mayor Randall Woodfin on Wednesday went into detail about two areas that have raised the most concern by some over the spending plan – the police department and Birmingham City Schools.

The council on Tuesday approved the spending plan 8-0 which contains money for neighborhood revitalization including $10 million for street paving, an additional $1 million sidewalk budget and funds to maintain demolition and weed abatement. Councilor Stephen Hoyt was present but did not vote. The fiscal year starts July 1 and will run through June 30, 2022.

However, the mayor held a press conference on Wednesday to focus on areas of potential concern.

The Birmingham Police Department (BPD) is receiving just under $100 million in the FY 22 budget but the city needs more police in the community and he is in early talks of developing incentives to recruit new public safety employees and help retain those who have worked in public safety a long time, he said.

“The biggest thing our citizens want is more police presence, and I like to remind this community, we have 815 sworn officers that are a part of BPD . . . Where the national tenor is, there are less people applying to become officers. Therefore, with our existing 815 officers it’s going to be important how we strategically deploy them throughout the community to suppress crime, to be present, to build relationships and also be in the position to over-communicate with our citizens, ‘How can we be of service?’” said the mayor.

City Schools are not being ignored in the budget, the mayor said. BCS is receiving less than $3 million from the FY 2022 spending plan, but that is only because it has its own money, he said.

“The balance here is simple. They have their own separate budget, upwards of $300 million. We have a $450 million budget, so what we give them is extra, based on what they already have…Separate from our American Rescue Planning (ARP) funding,” he said, “they have received $120 million of [ARP] funding.”

Overall, the mayor said he was pleased with the budget.

“The budget that passed [on Tuesday] is the most significant in Birmingham’s history,” Woodfin said. “As we continue to recover from the effects of COVID, this historic investment in our people and neighborhoods will make everyone whole again.”

The spending plan funds the Birmingham Promise initiative and establishes a $50,000 grant program to pair city and neighborhood association funds to expand traffic calming strategies throughout the city. The boards and agencies which partner with the city to provide services for residents will also be fully funded.

To see a full list of the streets to be resurfaced visit https://birminghamal.gov/neighborhoods.

“I look forward to working with the council as we shift our focus to the Magic City Recovery, supported by funds from the [ARP],” Woodfin said.

“Our priorities are very clear for these funds. The first is seeing us through the COVID-19 health crisis…In addition to that, it is getting our workers and our students back on their feet,” Woodfin said. “[Then] it is doubling down on our commitment to neighborhood revitalization and supporting our small and Black-owned businesses.”

The submitted projects will be reviewed by city staff, and the timeline for the review process is coming in the next few weeks, he added.