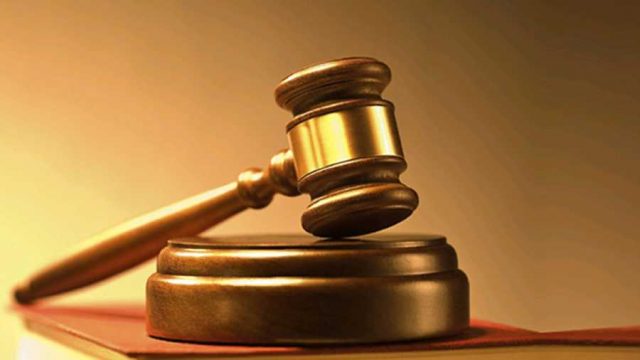 BIRMINGHAM, Ala. (AP) — A judge who oversees elections in an Alabama county was removed from office after being accused of racist, sexually inappropriate behavior that included demeaning comments about women and saying George Floyd “got what he deserved” when an officer in Minnesota murdered him.

Talladega County Probate Judge Randy Jinks, 65, was ousted in a unanimous order filed Friday by the nine-member Alabama Court of the Judiciary. Following a trial, the panel found that he violated five judicial ethics rules including failing to uphold the integrity and independence of the court system.

A former business owner who served as chairman of the county Republican executive committee, Jinks denied most of the claims, blamed workers for misinterpreting jokes and accused employees of eavesdropping, court records showed.

Jinks, who doesn’t have a law license, was first elected in 2018 and took office the following year. His conduct was the subject of a complaint filed in March that accused him of watching and sharing sexually inappropriate videos and making comments about the appearance and anatomy of women.

Jinks also mouthed the n-word when referring to Black people, including during Black Lives Matter demonstrations, and told a deputy clerk that Black people get benefits and welfare “because of the color of their skin” that don’t go to white people, the complaint said.

Jinks made multiple racist comments after Minneapolis police killed Floyd, a Black man whose death became a rallying point for protests nationally, including calling the victim “just another thug” and saying “he pretty much got what he deserved,” the complaint said.

The court found that after Jinks saw a new automobile purchased by the only Black employee in the probate office, he remarked: “I seen that car. I can’t even — I’m the judge and I can’t even afford a Mercedes. What you doing, selling drugs?”

Jinks also improperly tried to help a woman get an early release from a prison sentence imposed in a neighboring county, the court found.

Jinks denied the allegations, and his lawyer released a statement to media outlets saying his remarks were taken “completely out of context” and viewed in a way to make Jinks look as bad as possible. The ruling can be appealed to the Alabama Supreme Court.

Located east of Birmingham, Talladega County has about 80,000 residents. Jinks’ duties under state law included supervising elections in the county, and he also handled probate matters including wills. Probate judges under state law are not required to be attorneys.

Jinks was elected to the Talladega County Commission in 1986 and worked six years on the staff of former Rep. Bob Riley, who later served two terms as Alabama governor.