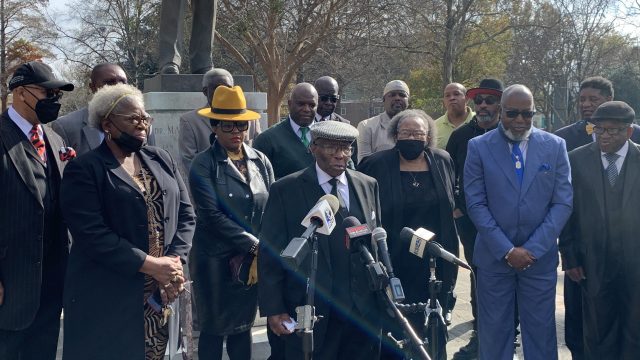 Bishop Calvin Woods announced Wednesday he is stepping down as president of the Southern Christian Leadership Conference (SCLC) Birmingham chapter. Woods, pastor of Shiloh Baptist Church in Norwood, has served as president since 2006.

“I’m delighted . . . after laboring with you the brothers and sisters, not by myself. I looked to God, you supported me. Maybe when I didn’t go right where you thought I should go, but you prayed for me, and I kept my mind stayed on Jesus,” Woods, 88, said during his announcement at Kelly Ingram Park, to an audience of city leaders and family. “It’s on Jesus right now.”

The SCLC dates back to 1957 when it was formed by a number of Black pastors, including Civil Rights giants The Reverend Fred L. Shuttlesworth and Dr. Martin Luther King Jr., who served as the organization’s first president.

Birmingham Mayor Randall Woodfin said Woods has continued the “grand legacy” of the SCLC which has been the “foundation for change.”

“Bishop, please know that your community is grateful to you and for you, for your very important work, for your voice, for your tenacity, for the best prayers Birmingham has seen in a very long time,” Woodfin told Woods in Kelly Ingram Park.

Councilor Woods said his grandfather has been an “invaluable” example of lifelong service.

“I truly believe that greatness is excellence over time, and so you can do something excellent once,” the councilor said, “but to continue to do it and sustain it over decades and decades is what is truly special.”

McClure said Bishop Woods is leaving “large shoes” for others to fill. “My grandfather, I want to say personally, thank you for the living example that you set, that every morning I wake up, I am not just trying to make history. I’m chasing history,” McClure said, “and so for that, I’m eternally grateful.”

Bishop Woods was a key member of the Birmingham Civil Rights Movement in the 1950s and 1960s and among those arrested and beaten in the fight to desegregate buses in Birmingham. Bishop Woods also participated in the March on Washington for Jobs and Freedom in 1963.

He is also the younger brother to Abraham Woods Jr., who served as SCLC Birmingham chapter president before Calvin.

The outgoing president said Patterson is well-equipped for the position. “[Patterson is] an able, a capable man, who served in Selma many years ago, who has labored here with this chapter for many years, who is well-able,” Woods said. “He’s a Christian man…He exemplifies that Christianity in the way not only he walks, but in the way he talks.”