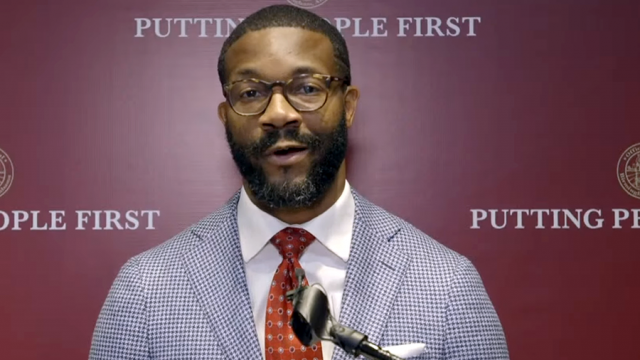 Birmingham Mayor Randall Woodfin on Tuesday angrily denounced protesters who showed up at his front door the night before.

“A lot of folks who disrespect you are not your neighbor and don’t even live in this city,” said Woodfin, visibly upset, at the City Council meeting. “To the folks that came in my private yard, on my private property, on my steps, on my front porch, hear me clearly when I say this, ‘Try Jesus, but don’t try me.’”

Protesters were opposed to an agreement between the city’s police department and U.S. Immigrations and Customs Enforcement (ICE) that would deputize several BPD officers as customs officers for ICE’s Homeland Security Investigations jurisdiction.

The City Council on Tuesday approved a continuation of a previous 3-year agreement on an 8-0 vote, Councilor Crystal Smitherman was not present, despite opposition from advocacy groups worried that it could lead to more deportations in the city and give ICE too much power.

City officials said that was not the case.

On Monday, one of the protesters livestreamed the group as they knocked on the doors of Woodfin. The video was livestreamed on the Facebook page of Adelante Alabama Worker Center, a group that fights on behalf of low-wage and immigrant workers and their families in the Birmingham area. Advocates also went to the homes of Councilors Carol Clark and Clinton Woods.

“We have democracy in this country, in this state, in this community, in this city. Each of us has the right to protest, organize, activate people, when we are against something or for something, and City Hall is a very open space,” Woodfin said. “I think over the last four years I’ve shown that our door is always open for anyone that wants to address an issue they are concerned about.”

In the video, Ana Delia Espino, executive director for the Alabama Coalition for Immigrant Justice (ACIJ) leaves copies of a letter signed by numerous activist organizations in protest of the agreement between ICE and BPD.

Espino, who was also at the council meeting Tuesday, said she was simply representing her community by her showing up at city officials’ homes.

“When community asks us to do something, even if I’m angry, scared, upset … I need to be accountable to them . . . on last night’s events, we had a few community folks that said, ‘Hey, let’s ask the council members to vote down this collaboration.’”

Last month, Espino said the agreement between ICE and the BPD would add to “profiling, over-policing and criminalization of people of color.”

The matter originally went before the council in November but was delayed due to concerns that it would require the police officers to participate in the deportation and removal of undocumented Birmingham residents.

“. . .There is no need for our police to be trained as ICE officers in any way, shape or form because it opens the door to deepening more distrust and hurt to our communities and our relationships as Birminghamians and as Alabama residents,” Espino said in November.

Since then, Woodfin and Councilor Hunter Williams, former chair of the Public Safety Committee, have assured residents that the agreement will not and does not empower officers to engage in deportation.

Williams said Tuesday that partnering with ICE’s Homeland Security Investigations (HSI) arm is the only way the city can effectively pursue human and drug traffickers.

“We as the city of Birmingham, and I speak on behalf of the police department,” Williams said, “simply do not have the resources to investigate these types of crimes ourselves without the help of federal expertise.”

The contract for ICE and BPD is explicit and does not allow officers to engage in deportation-related activity “so that we are crystal clear that they will not act in any way as a naturalization or deportation officer, period,” Williams said. “We don’t want any of our city staff doing that.”