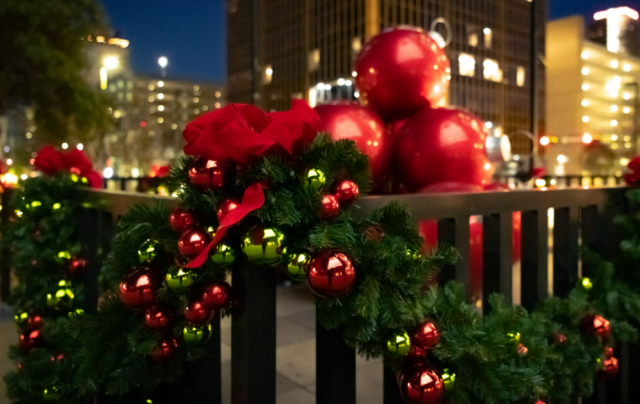 This collection of quotes presents many Christmases from many voices including Queen Latifah, rapper, actress, businesswoman, who talks of handing out gifts at toy drives for Christmas and the importance of giving back; and Caroline Kennedy, attorney, and prominent member of the Kennedy political family, who looks back on Christmases that create family traditions and lasting memories. Here are their words and thoughts from dozens of others as we celebrate the holiday season.

“When I cook for my family on Christmas, I make feijoada, a South American dish of roasted and smoked meats like ham, pork, beef, lamb, and bacon – all served with black beans and rice. It’s festive but different.”

“What I love about Christmas music is it stays around every year and comes back.”

“Christmas is a season not only of rejoicing but of reflection.”

“A good conscience is a continual Christmas.”

Benjamin Franklin, one of the Founding Father of the United States

“I will honor Christmas in my heart, and try to keep it all the year.”

“Christmas is the perfect time to celebrate the love of God and family and to create memories that will last forever. Jesus is God’s perfect, indescribable gift. The amazing thing is that not only are we able to receive this gift, but we are able to share it with others on Christmas and every other day of the year.”

“Moving between the legs of tables and of chairs, rising or falling, grasping at kisses and toys, advancing boldly, sudden to take alarm, retreating to the corner of arm and knee, eager to be reassured, taking pleasure in the fragrant brilliance of the Christmas tree.”

“Maybe Christmas, the Grinch thought, doesn’t come from a store.”

“Christmas is not a time nor a season, but a state of mind. To cherish peace and goodwill, to be plenteous in mercy, is to have the real spirit of Christmas.”

“Christmas is joy, religious joy, an inner joy of light and peace.”

“Christmas waves a magic wand over this world, and behold, everything is softer and more beautiful.”

“I don’t have a real recipe with measurements for my chicken stew. I just kind of make it up as I go. I made it for the first time one Christmas when I came home from college. It’s guaranteed to cure a cold.”

“I’ve been giving back since I was a teen, handing out turkeys at Thanksgiving and handing out toys at toy drives for Christmas. It’s very important to give back as a youth. It’s as simple as helping an old lady across the street or giving up your seat on the bus for someone who is pregnant.”

“Finding the real joy of Christmas comes not in the hurrying and the scurrying to get more done, nor is it found in the purchasing of gifts. We find real joy when we make the Savior the focus of the season.”

“Christmas is doing a little something extra for someone.”

“Christmas is a season for kindling the fire for hospitality in the hall, the genial flame of charity in the heart.”

“When I was 12, all I wanted for Christmas was a trampoline or a four-wheeler. I ended up getting both presents for Christmas.”

“Well, the album ‘Intuition’ is out and just went platinum officially. So I think to have the music doing what it’s doing right now, man, it’s the ultimate. Nobody is really selling records out there but we are at a million records and we dropped it at Christmas, so we are just trying to get that thing to like two million, you know.”

“It is a fine seasoning for joy to think of those we love.”

“The earth has grown old with its burden of care, but at Christmas it always is young, the heart of the jewel burns lustrous and fair, and its soul full of music breaks the air, when the song of angels is sung.”

“T’was the night before Christmas, when all through the house, not a creature was stirring, not even a mouse.”

“Christmas is the day that holds all time together.”

“He who has not Christmas in his heart will never find it under a tree.”

“Expectancy is the atmosphere for miracles.”

“Don’t let the past steal your present. This is the message of Christmas: We are never alone.”

“As I lay so sick on my bed, from Christmas till March, I was always praying for poor ole master. ‘Pears like I didn’t do nothing but pray for ole master. ‘Oh, Lord, convert ole master;’ ‘Oh, dear Lord, change dat man’s heart, and make him a Christian.’”

“The excellence of a gift lies in its appropriateness rather than in its value.”

“Christmas is a tonic for our souls. It moves us to think of others rather than of ourselves. It directs our thoughts to giving.”

“Christmas… is not an external event at all, but a piece of one’s home that one carries in one’s heart.”

“Every gift which is given, even though it be small, is in reality great, if it is given with affection.”

“Now, the essence, the very spirit of Christmas is that we first make believe a thing is so, and lo, it presently turns out to be so.”

“Christmas renews our youth by stirring our wonder. The capacity for wonder has been called our most pregnant human faculty, for in it are born our art, our science, our religion.”

“It’s true, Christmas can feel like a lot of work, particularly for mothers. But when you look back on all the Christmases in your life, you’ll find you’ve created family traditions and lasting memories. Those memories, good and bad, are really what help to keep a family together over the long haul.”

“The sharpest memory of our old-fashioned Christmas Eve is my mother’s hand making sure I was settled in bed.”

“Christmas is a stocking stuffed with sugary goodness.”

“I save every Christmas card. I keep them all.”

“Christmas, children, is not a date. It is a state of mind.”

“I love Christmas, not just because of the presents but because of all the decorations and lights and the warmth of the season.”

“Before we took down the tree each year, Dad would always say a prayer that we would be together the next Christmas. I cling to that prayer, which serves as a reminder that it’s important to be grateful in the present for the people you love because, well, you never know.”

“I love the excitement, the childlike spirit of innocence and just about everything that goes along with Christmas.”

“I’m sure most of us remember being a kid and you have all of this endless time where two weeks before Christmas feels like ten years. I used to go to bed to try and go to sleep to try and make it go faster.”

“I love giving gifts and I love receiving them. I really like giving little kids extravagant gifts. You see their little faces light up and they get excited. If it’s a really good gift, I love receiving it, like jewels, small islands.”

“Christmas is, of course, the time to be home – in heart as well as body.”

“Christmas is a time of year that’s so romantic.”

“You can’t allow the forces of political correction to shut you up. I mean, why are people afraid to say, ‘Merry Christmas?’ Give me a break. If people don’t like it, yeah, they can go do something else.”

“I remember wishing there was snow in L.A. And how jealous we used to get of those Christmas specials with kids playing in the snow.”

“I’m bad on Valentine’s Day, but even worse on Christmas. I go shopping at nine o’clock on December 24th every year. Nobody else is there. I’m in Toys’R’Us all by myself. I get there five minutes before closing.”

“My family background is Mexican, and I was born in Chicago. It’s pretty much family tradition every time we get together for Christmas and major holidays to sing. Our family time is centered around the food and a little bit of performing for one another.”