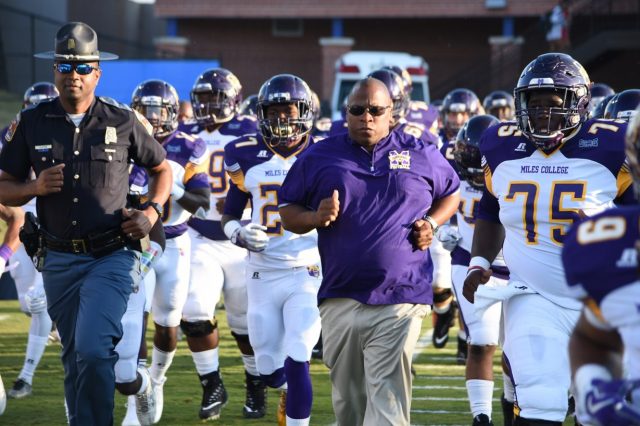 Reginald Ruffin, the highly successful athletic director and head football coach at Miles College, is headed to Tuskegee University where he will hold the same two positions.

“We are excited to see the return of Reginald Ruffin to Tuskegee,” said President Charlotte P. Morris on Tuesday. “He has proven himself a leader in Southern Intercollegiate Athletic Conference (SIAC) football, and we look forward to him taking our program to the next level.”

Ruffin was at the helm of one of the most successful sports decades in the history of Miles College and the SIAC. In nine seasons at the helm of the Golden Bears, Ruffin led the program to four SIAC Football Conference Championship titles, two NCAA playoff appearances, a NCAA Division II bowl appearance.

Over nine seasons, Ruffin has won more than 60 percent of his games, going 59-39 overall, and was named SIAC Coach of the Year three times.

Before his first stint with the Golden Tigers in 2002-2003, he served as athletic director and head football coach at Choctaw County High School in Butler. Other stops included times at West Georgia, his alma mater, North Alabama and Jackson High School in Jackson, Alabama.

Ruffin is a 1998 graduate of the University of North Alabama and holds a Master’s degree in Education Administration from Nova Southeastern University in Fort Lauderdale, Florida. During his playing days at the UNA, he became the Lions’ second three-time All-American and is the only Lion to be named All-America at two different positions: a defensive end in 1995 and 1996 and a linebacker in 1997.

A four-year starter, he established a school record with 34 career sacks and the school single-season sack record with 11 in 1994. During his career, the Lions went 43-9 and won two Division II National Championships. In 2020, he was inducted into the UNA Athletic Hall of Fame.

Ruffin is the father of one son, Gabriel.