It’s 11 o’clock on a chilly, bright fall Friday morning at the Forestdale Food Truck Park, and customers have already started lining up outside one of the hottest food trucks in Birmingham.

Kyla Jones, who lives in nearby Adamsville, discovered the Aww Shucks truck about a year ago, and whenever it’s in Forestdale, she’s here. 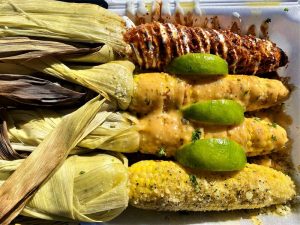 “Every Friday I try to make my way out here,” Jones says. “I love Mexican street corn, and when I found someone that could make it as authentic as I’ve had before in California, it gave me a sense of, ‘OK, we now have it here in Alabama.’”

Born On The Fourth of July

Powell and his wife, Avrie, started Aww Shucks nearly a year and a half ago — in part because Avrie, who is vegan, couldn’t find a lot of options that fit her diet when they went out to eat.

“We were out somewhere, and I told him, ‘I am so tired of eating fries everywhere I go,’” she remembers. “So, we came up with the concept of corn because it can be roasted. We wanted to give people a good vegetarian option without the grease.

“And it was something that I think the community was kind of missing. . . . We wanted to provide something that really wasn’t out here and put a unique twist on it.”

They came up with a catchy name and had a playful, cartoon-like logo designed to go with it.

“We wanted something that kind of came natural to us,” Avrie says of the name. “We were like, ‘aw shucks.’ That’s something people just say without even thinking about it. We got a logo created — something fun, something that was going to represent us because we want it to be a fun place to come to get something good to eat.”

They launched Aww Shucks on July 4, 2020, in the parking lot outside Applebee’s in Birmingham’s Five Points West area.

“This is how determined we were,” Powell recalls. “We had just purchased a food truck two weeks before — no air conditioning, only a box fan and a couple of hundred ears of corn.

By the end of that first summer, Aww Shucks was such a hit the Powells had to rethink their plans.

“(At first) it was just like, ‘Hey, we’re going to go out and sell some corn and hope people buy it,’” Powell says. “This was never intended to be anything other than a weekend thing for my wife and I.”

When school started back, Avrie returned to Bessemer City High School, where she teaches 12th grade English, and Phillip hired his nephews Jarris Brooks and Brandale Oliver to help him on the truck.

As their business took off, the Powells later purchased a second, bigger food trailer and another, larger corn roaster.

“When people ask me about Aww Shucks, I relate it to a baby,” Powell says. “When it first started, it was a newborn child. You take care of it, put diapers on it. . . . Now, the baby’s walking. It’s 16 months old. It’s got teeth now.”

While Phillip runs most of the day-to-day operations for their business, Avrie gets the word out on the Aww Shucks social media accounts, including Facebook, Instagram, Twitter, Snapchat and TikTok.

“The customers created a lot of cobs that we have,” Powell says. “The Creamy Ranch, the Cajun Parmesan — the customers asked for those. We put it on the menu, and they loved it.”

Most of the corn sells for $5 an ear, although a few varieties are a dollar or two more. Aww Shucks also offers four-, five-, eight- and 10-packs.

“That gives customers the opportunity, if this is their first time, to try an assortment of flavors,” Powell says. “You can mix and match any four, five, eight or 10 that you want.”

In addition to the roasted corn, Aww Shucks recently added fire-roasted baked potatoes to the menu, including a vegetarian chili potato and a skillet-corn stuffed potato.

In the spring and summer months, the truck is parked at Regions Field for some Birmingham Barons baseball games.

Bigger Things Ahead In 2022

Before he and his wife started Aww Shucks, Powell worked as a car salesman for nine years. He also has another business, Chapter 7 Bankruptcy USA, which helps people handle their bankruptcy cases. But he’s had to put that on the back burner since cranking up the food truck.

“I tell people this all the time – our plans are not God’s plans,” he says. “I do believe if God would have shown me before I left the car business that I would be doing a food truck, I would have been like, ‘No way.’”

As promising as the first year and a half has been for Aww Shucks, Powell sees even bigger things ahead.

“I don’t know, man, 2022 is going to be something different for Aww Shucks, I’ll tell you that,” he says. “We’ve got a lot of stuff that we’re working on.

This story appeared originally on AL.com

If you would like to see your favorite food truck featured in The Birmingham Times, email bwright@birminghamtimes.com, and put “Food Truck” in the subject line.