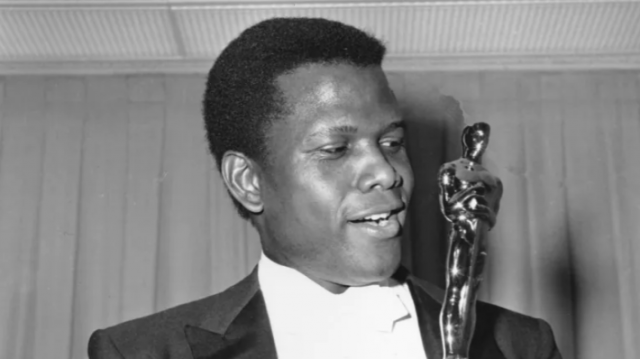 Sidney Poitier, a Hollywood trailblazer and the first Black man to win an Oscar for best actor, died Thursday. He was 94.

Many of Poitier’s memorable roles dealt with race in mainstream Hollywood films before others opted to do so.

Poitier was honored many times while he was alive: The American Film Institute included him on its 1999 list of greatest male Hollywood stars, Queen Elizabeth II knighted him in 1974 and President Barack Obama awarded him the Presidential Medal of Freedom in 2009.

After his death many stars are continuing their praise by remembering and paying homage to the “landmark actor” and “man among men.”

In a statement Friday, President Joe Biden honored Poitier as a “once-in-a-generation actor and advocate whose work carried so much dignity, power, and grace that it changed the world on and off the big screen.”

“With unflinching grandeur and poise — his singular warmth, depth, and stature on-screen — Sidney helped open the hearts of millions and changed the way America saw itself,” the president added. “He blazed a path for our Nation to follow, and a legacy that touches every part of our society today.”

Biden continued: “Jill and I send our love and prayers to Sidney’s wife, Joanna, his daughters, and his grandchildren and great-grandchildren. May God bless Sidney Poitier.”

Director Martin Scorsese praised Poitier for his acting prowess and courageous artistry, calling him “a major figure in our cinema and in our culture.”

“For years, the spotlight was on Sidney Poitier,” Scorsese said in a statement. “It was almost always for reasons other than the fact that he was an excellent actor. With good reason, given the horrors he faced as a young man and the obstacles he had to overcome long after he became a star.

“But he had a vocal precision and physical power and grace that at moments seemed almost supernatural. His most widely remembered films are the ones that broke racial barriers in Hollywood, but he was just as good in many other pictures that we should all look at again, like ‘No Way Out,’ ‘Edge of the City’ or ‘The Bedford Incident.’ ”

Denzel Washington remembered Poitier as a friend who helped set the stage for him and many others.

“It was a privilege to call Sidney Poitier my friend. He was a gentle man and opened doors for all of us that had been closed for years,” Washington said in a statement to USA TODAY Friday. “God bless him and his family.”

Oprah Winfrey posted a touching photo of her and Portier embracing one another while smiling on Instagram.

“For me, the greatest of the ‘Great Trees’ has fallen: Sidney Poitier,” Winfrey wrote. “My honor to have loved him as a mentor. Friend. Brother. Confidant. Wisdom teacher. The utmost, highest regard and praise for his most magnificent, gracious, eloquent life.”

Viola Davis shared a picture of herself and Poitier together on Instagram writing a touching tribute to the legacy Poitier left others in Hollywood.

“The dignity, normalcy, strength, excellence and sheer electricity you brought to your roles showed us that we, as Black folks, mattered,” Davis wrote. “You told us,’If your dreams do not scare you, they’re not big enough!’ I put this quote on my daughter’s wall. Rest well Mr. Poitier. Thank you! Thank you for leaving a legacy. May flights of angels sing thee to thy rest.”

Tyler Perry wrote a lengthy tribute to Poitier on Facebook, labeling him as his “North Star” in the industry.

“To wake up this morning to a call that Sidney Poitier has passed away… all I can tell you is that my heart broke in another place. The grace and class that this man has shown throughout his entire life, the example he set for me, not only as a black man but as a human being will never be forgotten,” Perry wrote.

The 52-year-old screenwriter, actor and producer added details a “life changing” memory of him spending time with both Poitier and the late actress Cicely Tyson.

“I’ll never forget inviting him and Cicely to fly to South Africa with me. Selfishly, I wanted to hold them both captive for the hours long trip as I literally sat at their feet and listened to their wisdom and experiences,” he wrote. “All I can say is thank you for your life, thank you for your example, and thank you for your incredible gift. But most of all, thank you for being willing to share YOU to make us all better.”

Former President Barack Obama shared a photo of him, Michelle Obama and Portier in the White House.

“Through his groundbreaking roles and singular talent, Sidney Poitier epitomized dignity and grace, revealing the power of movies to bring us closer together. He also opened doors for a generation of actors,” Obama wrote. “Michelle and I send our love to his family and legion of fans.”

Don Cheadle said Friday he was “gutted” by Poitier’s death.

“Lost another royal. Sir Poitier had no peer, and we’ll never see his like again. He was the standard bearer for generations of actors/directors who came after him,” Cheadle said in a statement to USA TODAY Friday, recalling the last time he saw Poitier “was at a golf course in L.A. I saw him across the room and walked toward him with my hand out to shake his. Ignoring my hand, he opened both of his arms wide and embraced me warmly.

“Then he let me go and held me at arm’s length staring me in my eyes and said in his signature cadence, ‘I dig what you do, my man.’ I almost fainted. He told me to keep it up and keep representing us. I told him I would do my best and that he was irreplaceable. We were so blessed to have him for as long as we did, and he will be sorely and surely missed.”

Poitier’s work was so impactful in presenting opportunities for other minorities in the industry, one biographer dubbed him the “Martin Luther King of the movies.”

Director Kenny Leon, who won a Tony for his 2014 rendition of the 1959 Broadway play “A Raisin in the Sun,” in which Poitier was part of the original cast, remembered Poitier by thanking “God for sharing” the actor with the world.

“Rest in dear sweet peace sir Sidney Poitier..where would we be without your sacrifices? an artist among artist-a man among men,” Leon wrote.

Whoopi Goldberg tweeted lyrics for the song that accompanied Poitier’s 1967 film “To Sir, with Love,” adding, “Sir Sidney Poitier R.I.P. He showed us how to reach for the stars.”

Dionne Warwick recalled a time meeting Poitier when she was younger, which resulted in the late actor giving her a nickname.

“He once caught me following him. He said ‘little girl what do you want’ I muttered ‘can I have your autograph,’ “ Warwick wrote. “From that day he always called me little girl and asked if I wanted his autograph. It was something we laughed about. He was my hero & great friend.”

Jada Pinkett Smith wrote: “Trailblazing is not easy and you did it with grace and tenacity. I am grateful. Rest in Love.”

“We lost an elegant King today. Thank you Sidney Poitier. For not only opening the door, but for walking in this world with endless grace and excellence, so that today, still, we follow behind you, reaching toward the example that you set,” Kerry Washington wrote.

Blair Underwood tweeted: “The gift of your time and presence over the decades is not lost on me. You’ve exemplified selflessness and service in your every waking hour. Indeed, what a beautiful life you have lived & legacy to behold.”

Like Perry, LeVar Burton also considered Poitier to be his “North Star” in entertainment, writing, “My North Star and guiding light. The very personification of elegance, eloquence, effortless grace and humanity, I have admired and emulated him my entire life. Without Sidney Poitier, quite simply, there would be no LeVar Burton.”

Leyna Bloom posted on Instagram, reflecting on Poitier’s impact: “Sidney Poitier thank you for your dedication to the power of art and giving our brothers and sister’s a real vision of who we are and who we should always be.”

“Heart is aching. Sir Sidney Poitier was not just a great actor. He was a wonderful human being and truly the most elegant man I ever met in my life. Rest Well Dear Brother,” former “The View” host Star Jones wrote.

Rosie Perez wrote: “#SidneyPoitier’s portrayal in ‘To Sir, with love’ literally changed me.”

“The Real” co-host Loni Love shared a memory meeting Poitier, writing, “What a thrill it was to meet the legendary actor Sidney Poitier.. he made us all feel proud and was an inspiration to us in an industry that at times could not be welcoming.. thank you Mr. Poitier rest well.”

George Takei remembered Poitier as a “trailblazer who will be mourned by so many for whom he opened the very doors of Hollywood.”

“Candyman” actor Colman Domingo wrote: “Until I can properly eulogize him later. Heart broken. I am because of him. He blazed a tremendous path for thespians such as me. I am forever grateful. Standing O for this giant.”

Poitier’s acting career began with the American Negro Theater and five years later, he was starring in his first feature film: “No Way Out,” a hospital drama about a doctor (Poitier) confronted with racism by a white patient he is working to save. He went on to star in films such as “To Sir, with Love” and “In the Heat of the Night.” Over the years, he built up a reputation for playing gentle, kind and smart characters.