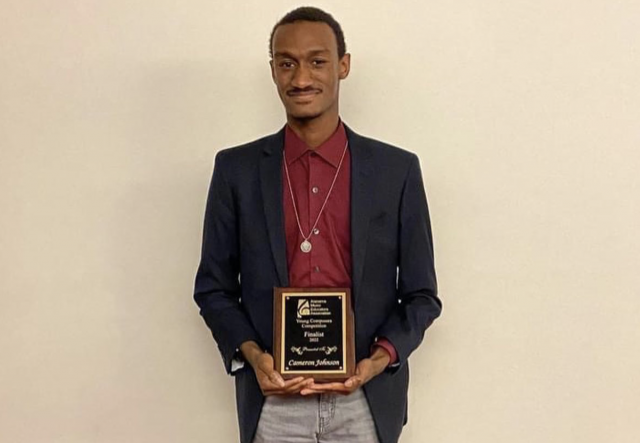 Cameron Johnson first picked up an instrument during his fifth-grade year at Bumpus Middle School in Hoover, Alabama. He was dead set on playing saxophone in the school band but scored one point too low during instrument testing.

However, he scored a nine on the flute, “and [my teacher] was like, ‘You can do that.’ I’m like, ‘OK, no, respectfully,’ because the very, very young middle school kid in me was like, ‘I’m not playing [that] instrument,’” Johnson recalled.

His second highest score was in trumpet, an instrument he could work with, given his appreciation for jazz and gospel music. Today, Johnson—a sophomore in the University of Alabama at Birmingham (UAB) music education program—not only still plays trumpet and “semi-dabbles” with piano but also was recently named as one of five finalists in the Alabama Music Educators Association (AMEA) Young Composers Competition, the highest honor awarded in the competition.

The award validated the work he put in: “It reinvigorated my love and passion for writing music,” said Johnson.

“I’m far from being perfect or far from being done studying, but it showed me that there might be something in this. I’m not just aimlessly poking at stuff. … People are starting to notice, [and] it makes me feel better about how much time I try and dedicate to doing this.” 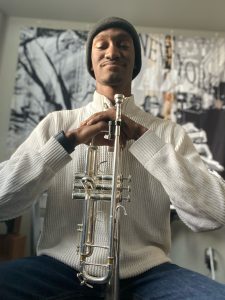 Johnson said he loves the “timeless” quality of music. “[Music is] something that—no matter what it is, where it is, where it came from, or what it could potentially turn into—will never cease to exist,” he said. “This is why my passion lies in music: I know it will never truly leave me.”

The composition that earned him the AMEA finalists’ honor is titled, “After the Dust Has Settled.”

“Over the past year and a half to two-ish years, we’ve been stuck in this massive struggle that is the [COVID-19] pandemic, and it got me thinking about other giant world tragedies, … such as 9/11 and how that rattled the world not only from a visual standpoint but also from a theoretical standpoint—just an overarching thing that changed the world forever,” Johnson said.

He wrote the main theme for the composition in the spring and summer of 2021 before he knew the competition existed. When he “stumbled upon” the contest, Johnson said it forced him to finish the piece faster.

A Love for Jazz

Johnson remembers having an “obsession” with music all his life. Some of his earliest musical memories include humming Disney movie scores long after the credits rolled and listening to his mother, Sybil, a nurse at the UAB Women and Infants Center, singing along to gospel music in the car.

“I’ve always had [some piece of music] or another swirling in my head from a really young age,” said Johnson, 20.

At Bumpus, Johnson said he performed in the regular school band and a middle school jazz band, where he developed a love for jazz. Yet it wasn’t until he was under the tutelage of Hoover High School band directors Ryan Fitzpatrick, Matthew Cicero, and particularly Sally White that he really understood jazz.

“I dedicate all of my love and appreciation for the for the deep, rich history with the music that is jazz to [White] because she’s not only a fascinating educator but a true and genuine musician. … Every time she plays, when she teaches, you can tell that this is what she loves to do,” said Johnson.

It was also in high school that he deepened his love of the music he now writes—classical music or, more specifically, “modern contemporary wind band music.”

“I was fortunate enough to be exposed to some really challenging wind band literature and got to play works by some really fantastic composers who have all inspired me,” Johnson said.

Among his many influences for playing and composing are 20th-century composers like Igor Stravinsky and Percy Grainger, as well as contemporaries like John Mackey and Omar Thomas.

For playing trumpet, Johnson’s main instrument, he cited Clifford Brown and, “of course,” he said, Louis Armstrong, among others. A particularly special musician for Johnson is Wynton Marsalis, one of the most decorated composers in American history.

“[Marsalis is] my main inspiration as a musician. I think he’s currently the greatest musician alive, in my humble opinion.”

“[Because] I have so many ideas I’ve had to, over time, learn to place limits on myself so I don’t just start spiraling down a staircase of different things that don’t have any kind of cohesion,” he said. “When you’re trying to write music, yes, you can do basically whatever you want. But, at the end of the day, you’re going to want to write something that makes sense because that’s what’s going to appeal be appealing to the listener’s ears.”

In regard to composing, Johnson typically either sings a musical idea or works it out on the piano before he writes it on paper. He always starts on paper before he puts his work into digital music composition software. When he doesn’t flesh out an idea, he’ll just record himself singing it for later use.

“I have way too many voice memos on my phone of ideas that are gonna stay in there forever,” he said.

After he graduates from UAB, Johnson said he would like to teach others about music, possibly as a college professor, and continue writing music, as well.

“I believe education will play a role in everything I do, which is why I’m choosing to stick with this degree,” he said. “People have asked me why I don’t ever transfer programs, … and I come back to the answer that I still want to teach in some capacity.”

Even as an AMEA Young Composers Competition finalist, Johnson said he is still growing.  “I’m still learning and fleshing out the craft that is [composing] because it’s something that can take a lifetime to truly [understand],” he said. “And even then, you still never truly understand to its full extent.”