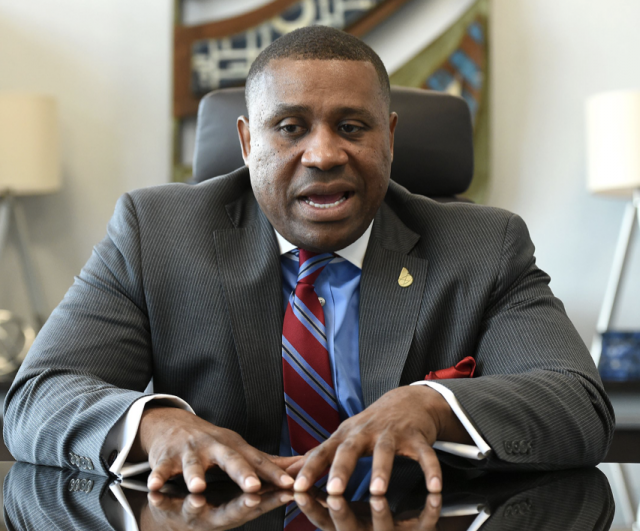 On a bright spring morning, Jonathan Porter begins a tour of places that have made a profound difference in his life, beginning with a visit to the A.G. Gaston Boys and Girls Club (AGGBGC) in Bessemer, Alabama, and ending with an interview in his 16th-floor office at the Alabama Power headquarters in downtown Birmingham.

In between those stops, Porter—chair of the board of directors for the Birmingham Organizing Committee for The World Games 2022 (TWG 2022) and senior vice president of customer operations at Alabama Power—makes a trip to his boyhood home in Bessemer, where he visits his mother.

“She means everything to me,” Porter said of his mother. “No matter how high I get [in my career], I will always be looking up to her.”

Nowadays, Porter, 48, has people looking up to him. As chair of the TWG 2022 board, he must oversee all operations, lead fundraising efforts, and serve as an ambassador for the games, the city, the state, and even the nation.

“Of course, there’s a team,” Porter said. “We have a great team of folks that are committed to the success of the games, committed to showcasing the city of Birmingham, the state of Alabama, as this new South.

“[TWG 2022] is going to be the largest event in the state of Alabama’s history. … For me—a little kid from Bessemer, a [historically Black college and university (HBCU)] grad, [someone] that statistically probably shouldn’t even be in these seats—now being asked to chair this huge international event was truly humbling,” said Porter, who hopes that his story will show young people with similar backgrounds that they, too, have the capacity to beat the odds.

TWG 2022, which will draw elite athletes from more than 100 countries around the globe, will take place from July 7 through July 17, at various venues across the Birmingham metro area—including Protective Stadium, Legion Field, the Birmingham CrossPlex, and the Hoover Metropolitan Complex.

The event is held every four years in the year following each Summer Olympic Games. The World Games represent the pinnacle of competition for 3,600 of the world’s best athletes in 30-plus unique, multidisciplinary sports, including billiard games, wheelchair rugby, dance, and many others.

Porter knows what’s at stake and doesn’t take his role lightly. He sees TWG 2022 as an opportunity to show the world that Birmingham can live up to its nickname—“The Magic City.”

“Folks outside of the state and the city still tend to think of Alabama and Birmingham in black and white. They think of what they saw in the 1960s,” Porter said. “Yes, we will embrace our history, but we want to focus on our trajectory and the city of Birmingham being this new vibrant city in the South.”

Growing up, Porter spent much of his time outside of school at the AGGBGC in Bessemer, which is where he first met with The Birmingham Times for this profile and a tour of the places that have made a difference in his life. The club is where he began football, which he calls his “first love.”

“It also introduced me to a number of coaches that really stepped in as father figures,” Porter said. “I met some of my best friends still to this day, and it kept me focused on something positive rather than just running the streets.”

Today, Porter serves on the AGGBGC board as a way to give back to an organization that gave so much to him.

“They had summer enrichment programs along with sports, and they taught us fundamental principles like leadership, discipline, teamwork, and being accountable for your actions,” Porter said. “It really laid a good foundation for me.”

“A Bunch of Love”

Porter was born in Tuskegee, Alabama, but his family relocated to Bessemer when he was in first grade, so he considers Bessemer his hometown. His parents separated when he was about 7 or 8 years old.

“I grew up in a single-parent home, not a broken home,” Porter said. “A broken home is a home where there is no love. I had a bunch of love.”

That love came from his mother, Gwendolyn Porter, who still lives in the Bessemer home he grew up in. That was our second stop.

“My mother means everything to me,” Porter said. “She has had to be a mother and father, doctor, lawyer, cheerleader—everything. She keeps me grounded.”

Porter’s mother motivated him to make education a top priority, so he knew that bringing home bad grades was unacceptable.

“I would not be where I am if it had not been for Gwen Porter,” he said. “No matter how high I get, I will always be looking up to her.”

Porter also credits his start at Jackson Solomon Abrams Elementary School in Bessemer where he was honored last week by representatives of the World Games 2022 and the cities of Birmingham and Bessemer.

Porter couldn’t thank the elementary school enough for what it meant to him. Quoting German philosopher Johann Wolfgang von Goethe, Porter told students and officials, ‘If you treat a man as he is, he will remain as he is. If you treat him as he should be and as he could be, that he will be,’ so I want to thank Bessemer City Schools, J.S. Abrams Elementary School, for treating me as I should be…”, Porter said.

At Jess Lanier High School (now Bessemer City High School), Porter continued to play football and helped lead the school to a state championship. He went on to play for Tuskegee University, where he was a four-year letterman in football as a running back/fullback and was an All-Conference Scholar-Athlete.

“Football was good to me,” Porter said. “It financed my way through college.”

The executive said the gridiron also helped prepare him for life after college. The sport taught him discipline, the importance of teamwork, and how to get along with different personalities, skills he uses every day in his role at Alabama Power and as chair of the TWG 2022 board.

In 2019, Porter was inducted into the Tuskegee University Athletic Hall of Fame.

Despite his love for football, Porter is eager to show young Black men that athletics aren’t their only option for a better life.

“Sports are great and provide an avenue to things, but I want our young people to understand that through education you can also do something outside of sports,” Porter said.

He recalls a line from the song “Things Done Changed” by the Notorious B.I.G.: “Either you’re slingin’ crack rock, or you got a wicked jump shot.”

“A lot of young people in our community think those are their only options,” Porter said. “But you can have a wicked jump shot and have a 4.0 [grade-point average].”

Porter received much more than a bachelor’s degree in business administration from Tuskegee: “I got an education of self,” he said. “That’s really where I became a man.”

Moreover, meeting people from various backgrounds challenged him and helped him grow. “I know there’s a lot of re-emphasis on HBCUs right now, but for me Tuskegee was Wakanda way before [the film] ‘Black Panther,’” he said, likening the university to the fictional East African country that was home to the Marvel Comics superhero and depicted as the world’s most technologically advanced society.

Knowing that renowned men like educator Booker T. Washington, agricultural scientist George Washington Carver, and author Ralph Ellison once graced the campus made Porter feel that every day he was walking on hallowed ground. At the end of his time at Tuskegee, Porter was offered several jobs in other states, but he turned them all down.

“I realized that I loved this state, and I wanted to stay,” he said. “I wanted to give back to the community in which I grew up. If you keep taking away from the soil but you don’t replenish it, that land eventually dies. I turned down several job offers that would have me out of state because I wanted to do my part in replenishing the soil, so we can continue to grow our talent.”

Porter joined Alabama Power in 1991 as an intern through INROADS Inc., described on its website (inroads.org) as “a nonprofit organization that creates pathways to careers for ethnically diverse high school and college students.” As part of the program, Porter continued to intern at the utility every summer until he completed his undergraduate studies.

After briefly working as an underwriting analyst at Protective Life Corporation and as a manager at INROADS, Porter rejoined Alabama Power in 2000. Over the past 22 years, he’s held various positions, including senior corporate recruiter, vice president of human resources and ethics, and Birmingham Division vice president. Currently, he serves as senior vice president of customer operations, managing more than 600 employees across the state. He visits each Alabama Power office once each quarter to maintain good relationships with those employees.

Even with his demanding schedule, Porter’s top priorities are spending time with his wife, Kima, and “building on a great relationship” with his daughters, Laila, 18, and Kailyn, 12. Watching movies with his daughters is one of his favorite weekend pastimes. He and his youngest daughter recently binged all the Harry Potter movies.

“Birmingham has to decide whether we’re going to be historic or history,” said Porter, now sitting in his corporate office after visits to the AGGBGC and his childhood home in Bessemer. “I think sometimes when you focus on your past so much and that’s the only thing that defines you, you can become history.”

TWG 2022 is an opportunity for Birmingham to show that it’s relevant and here to stay, he said, adding that he hopes the games—projected to have an estimated $256 million in economic impact—will also show that Birmingham is “open for business.”

To showcase the city’s dedication to diversity, TWG 2022 has committed to spending 35 percent of its budget with minority- and women-owned businesses and is creating other opportunities for entrepreneurs. Additionally, the games will feature an interactive job fair highlighting careers in manufacturing, health care, and technology that are available in Alabama.