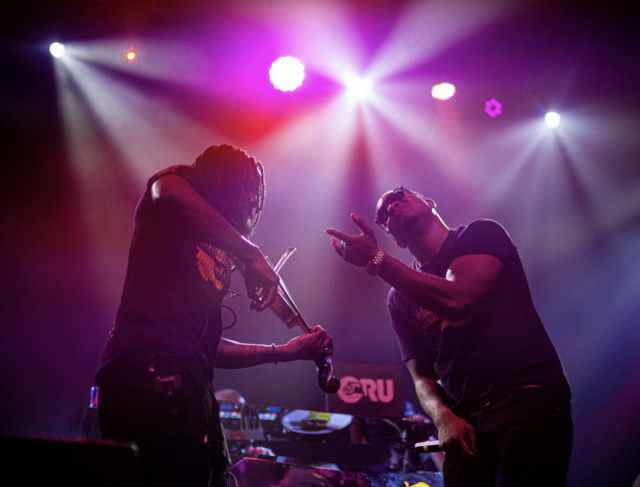 Growing up in North Philadelphia, Jason Ikeem Rodgers lived in two vastly different music universes. “I would be on the corner freestyle rapping with my boys, and then be like ‘I gotta go study my Beethoven piano lesson’,” Rodgers laughed. “I would try to make it sound as cool as possible, but I had to go study classical piano.”

Now he combines both genres as CEO, Founder, and Music Director of Orchestra Noir, the groundbreaking African American orchestra that is making its mark in the symphony orchestral world with its one-of-a-kind, first-of-its-kind, ingenious musical act.

On May 7, Orchestra Noir makes it Birmingham debut with “The Best of Hip-Hop and R& B” concert at the Lyric Theatre at 8 p.m. The ensemble will deliver its signature curated sound, which is a fusion of classical orchestra pieces, combined with the familiarity of hip-hop anthems and R&B favorites.

Asked what concert goers can look forward to and expect from the concert, Rodgers said, “Beethoven meets 90’s vibes”.

“They can expect the unexpected, nonstop action and big sound. Just when they think they know what’s going on, I usually find a way to surprise the audience. Tons of excitement fun, and comradery.”

One of the most anticipated parts of the show is the battle between the orchestra and a live DJ. “That DJ vs orchestra battle is something to see and hear,” Rodgers said. “It’s a piece for the eyes and ears, it’s the ultimate house party.”

“I was a teenager in that era, so doing this particular concert always takes me back,” he said. “I get to relive that time of growing up as a Philadelphia inner-city teenager because it’s who I am, it’s one of my worlds that I belong to, so [when conducting/performing this set] I’m just happily lost in that time and I think the audience can feel that wonderful nostalgia that I feel.”

Orchestra Noir is comprised of 50 pieces, with the infusion of a few non-traditional elements which contribute to its signature vibration composed of jazz, r&b, gospel, hip hop, and trap music’s tempo and arrangements.

“It’s special because it’s an orchestra and band combined and orchestras don’t usually take that route. Sometimes we use the sousaphone, it’s like the tuba, but you strap it on, you usually see it in marching bands, the drums, and the saxophone,” Rodgers said, “and all the other instruments are typical of a band or symphony.”

“The way that we did things and marketed ourselves was ‘let’s show our culture that we’re not going to shy away from expressing ourselves and being dope, and expressing black culture in our own special way.” Rodgers said.

Orchestra Noir is also a way for Rodgers to take a stand for social justice.

“With me being a Black conductor and [the symphony orchestra] a predominantly white institution, I wanted to build a Black institution that could one day bring black people pride,” he said. “It was also because of the injustices I was seeing. The Black Lives Matter movement really affected my decision as well because Orchestra Noir was my way of contributing and fighting for justice.”