The Birmingham Civil Rights Institute (BCRI) hosted a block party for Juneteenth Saturday. The museum used it as an opportunity to educate Black Americans about their history.

“While we are teaching our culture and the endurance of the African American community to children, we want to also celebrate and commemorate how that freedom came to be,” said Marketing and Communication Director Gina Mallisham.

Juneteenth is a celebration of freedom.

“It took a lot longer than people realize. It wasn’t just the emancipation that freed people.” 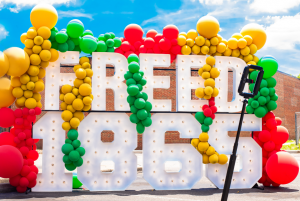 Sunday marks the day in 1865 that a Union Army major rode into Galveston, Texas to tell enslaved African Americans they were free.

“It wasn’t until June 19, right, so ever since the 1800s, we’ve been celebrating freedom and Juneteenth is our way that we do that.

The museum called the celebration a “Backyard Boogie”. There was food, live music and programs to educate Black Americans about their roots.

The African American Genealogy Group and the Birmingham Family History Center hosted genealogy workshops for people to trace back their ancestry.

Edward Fields attended the workshop. “I always wanted to know about my grandparents and where they are from and their life story as much as we can find,” Fields said.

Fields is taking on the responsibility to educate future generations. “It’s up to senior people to find who those other folks were,” Fields said. “Otherwise, the people that come behind them really have a lot harder job.”

Texas was the first to make Juneteenth a state holiday, with the day becoming a federal holiday just last year.