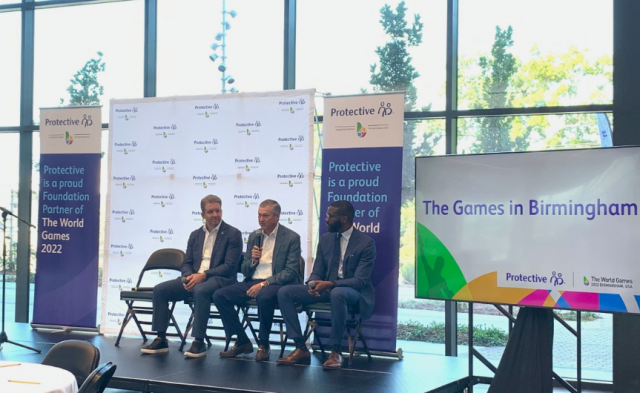 On Tuesday, more than a dozen Birmingham high school students met with local leaders at the first of a two-day leadership event hosted by Protective Life and The World Games 2022.

The rest of the activities for Tuesday and Wednesday included more interaction with corporate and TWG leaders, as well as business exercises and tours of facilities.

TWG 2022, which will draw elite athletes from more than 100 countries around the globe, will take place from July 7 through July 17, at various venues across the Birmingham metro area—including Protective Stadium, Legion Field, the Birmingham CrossPlex, and the Hoover Metropolitan Complex—and is expected to have an estimated $256 million in economic impact.

The event is held every four years, in the year following each Summer Olympic Games. Staged over 11 days, The World Games represent the pinnacle of competition for 3,600 of the world’s best athletes in 30-plus unique, multidisciplinary sports.

The panelists on Tuesday spoke mostly about leadership. Woodfin focused on surrounding oneself with other competent individuals as a key part of good management.

“People around you need to be as passionate, as smart or smarter than you are and have the ability to execute on whatever needs to get done,” Woodfin said.

Adams, who is also vice chairman of the board of directors for the TWG2022 organizing committee, and Sellers are good examples of that principle, Woodfin said.

“Between the entire (TWG2022) team, mainly these two gentlemen…They are not just capable, they’re passionate about making sure this is a success for our community,” Woodfin said.

Adams said one of his roles as a leader is to bring out the best of the people who work for, with and around him, “and so I hope you [students] think about that . . . as you work around others and work with others,” he said.

Adams added, “[My team members are] all smarter and know what they’re doing a lot better than I do, and so my role is just to inspire them and give them the freedom to go do their jobs and do it well and reward them and recognize them.”

Before the activities began, Adams said he wanted students to see The World Games as more than an athletic competition.

Sellers told the story of how The World Games came to the city, starting with retired Birmingham businessman Edgar Welden, who first put together the committee which bid for TWG in 2014 and how the following year the city was selected to host the event beating out Lima, Peru and Ufa, Russia. “Imagine if [Russia] had won,” Sellers said. The country was banned from TWG this year for its war against Ukraine.

The CEO also told students that an important takeaway from Games was the way it has brought together the region.