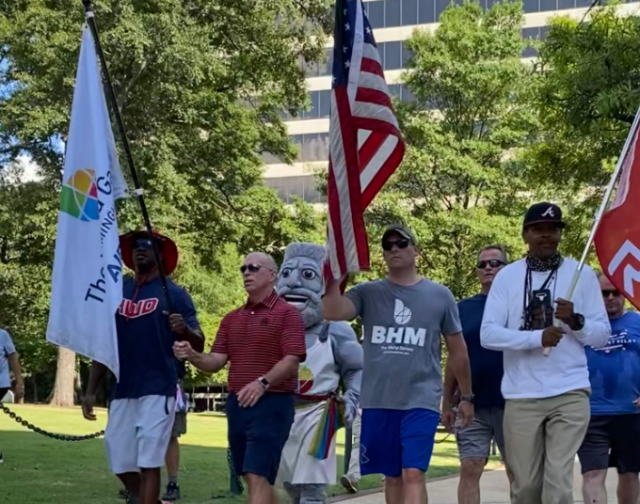 With all the excitement surrounding the mammoth World Games 2022, beginning July 7 in metro Birmingham, some have been asking: Can I still get there from here?

The response is clear from the city’s tourism officials and downtown advocates: Come on down!

“Our assessment is, downtown is ready – ready for lots of people,” said David Fleming, president and CEO of REV Birmingham, a nonprofit organization that works to energize the city center and other intown neighborhoods for residents and visitors.

“Birmingham is a very accessible, walkable city,” Fleming said, noting that there are only limited areas and streets in downtown that will be closed off because of the international event.

“What I would say is, don’t avoid downtown and what is going to be an amazing opportunity for us to engage the world. Don’t flee from it because you think traffic is going to be snarled and miss the chance to sit in a downtown restaurant and talk to someone who has come to our city from somewhere across the globe.”

John Oros, president of the Greater Birmingham Convention & Visitors Bureau (CVB) and a member of the Birmingham Organizing Committee for the World Games, said while downtown hotels are sold out through the World Games, there are many types of lodgings still available just outside of downtown, with some hotels offering special rates and discounts.

“We’re fortunate in that we’re a 20-minute city,” Oros said. Unless there’s an accident on the interstate, travel times are generally reasonable from many suburban towns, with a range of hotels and restaurant offerings in those cities.

Both Oros and Fleming noted the enhanced, free transportation system that has been established for the World Games. The four lines – Red, Blue, Green and Yellow – will run from morning until late evening all through the games, connecting the Regions World Games Plaza to stops stretching as far away as Legion Field and the Birmingham CrossPlex to the west, the Avondale neighborhood to the east, and downtown Homewood to the south. Visitors can park near the shuttle stops and hop on, or they can drive closer into the central city and then walk a few blocks to the plaza, or take an Uber or Lyft.

Oros noted that many of the sport venues are not in the central city. For example, there’s the Hoover Metropolitan Complex, where women’s softball will be played, Birmingham-Southern College for flying disc and Oak Mountain State Park, where there will be several sports, including waterskiing, wakeboarding, and canoe marathon. The Crossplex will be home to six sports, and both Avondale Park and Barber Motorsports Park are venues, all of which have ample on- or near-site parking.

Oros said the CVB website has its own hotel-finder for booking local reservations, or people can use many of the other hotel or travel apps on the Internet to find last-minute accommodations.

The CVB website also offers multiple visitor guides that outline plenty of activities and attractions separate from the World Games for those who want to mix it up while in town.

He and Fleming said area restaurants and stores are geared up for the influx of visitors and are eager to please, as are the thousands of volunteers who have signed up to help guide and support visitors to the city.

Oros said first-time visitors to the Birmingham area always “marvel” at the beauty of the region. “They don’t know about our greenspaces and our beautiful mountains and our parks. Things that we take for granted.”

He said the regional cooperation and support from across the community that has emerged and coalesced around the World Games, all with the intent to ensure that visitors have a positive experience, is truly extraordinary.

“What people don’t realize is, countries put on the World Games. But here, it has been on the city and the county and public-private partnerships to make it happen. That is a real win for this community.”

Fleming said he hopes the people of Birmingham, like the many visitors who are traveling from afar, come out to enjoy this once-in-a-lifetime event for the city and the state.

“The city is ready,” Fleming said. “Embrace the opportunity.”