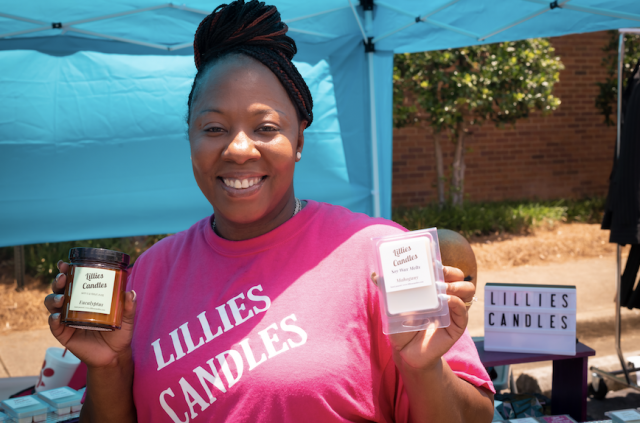 Shaunta Austin purchased candles from a large retail store chain and would watch soot, a substance consisting chiefly of carbon particles, come out of the jars while the candles burned. “At times I would just think, ‘This can’t be healthy,’” she laughed to herself.

That would eventually inspire Austin to research healthier candles and draw her attention toward soy candles, which are all natural, burn slower, and emit a stronger scent, in addition to being vegan and nontoxic.

She bought a kit and tested products in the comfort of her home in Eufaula, Alabama—and in March 2021, with the support of family and friends, launched Lillies Candles, a natural candle and wax melt company named after her grandmother.

Austin hand-pours her candles and wax melts using pure natural soy wax. She gets her fragrances from different candle vendors, such as Northwood Candle Supply and The Flaming Candle Company. It takes about five hours for Austin to make the candles and wax melts and up to two weeks for curing time.

“I have always been a candle lover,” she said. “Just seeing the glow of candlelight gives you a peaceful feeling. A nice scent of a candle makes you feel relaxed.”

She usually spends about seven hours a day working on her candle and wax melt creations, which sell for up to $13 and up to $6, respectively.

Austin, 45, credits her son, Jovonta Holmes, for her start in Birmingham. He moved to the Magic City after graduating from Eufaula High School to attend Miles College, where he earned a bachelor’s degree in criminal justice in 2018.

“He started selling the candles in Birmingham first,” Austin said.

When Austin launched Lillies Candles, her son quickly spread the word through social media and word of mouth to his classmates, professors, and co-workers, which helped his mother quickly build a large customer base in Birmingham. 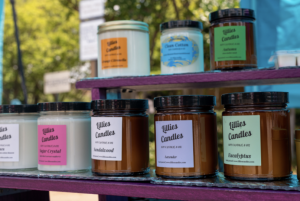 Austin, who serves as the CEO of her company, searched the Birmingham area for pop-up shops, where she teaches customers the benefits of the candles and how to take care of them.

“Soy wax is very precious, and that’s how you will reap the benefits of the smell,” she said. “It’s important to take care of your candle to continue to smell the true aroma.”

Austin’s candle care and use tips include “keeping the wick trimmed after the first burn,” she explained, adding that the wick should be “trimmed to prevent the candle jar from getting too hot and cause a fire. An untrimmed wick can result in a black ring of soot to form around the rim of the candle.”

Austin also cautions her customers against burning a candle for longer than necessary. She mentions that most candle companies, including hers, affix a safety hazard label at the bottom of each candle stating that it should not be burned for more than four hours at a time. Allowing a candle to burn for longer than that will result in the accumulation of soot around the candle jar, which may overheat and burst. 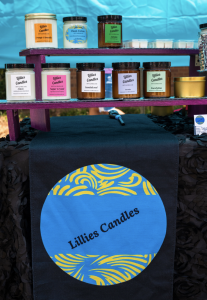 Basking in the Glow

Austin grew up in Eufaula and spent a lot of time with her grandmother, Lillie D. Holmes, who taught fourth-grade at Van Buren Elementary School and passed away when Austin was nine years old.

Austin attended Troy University, where she earned a bachelor’s degree in business administration in 2010. After graduating, she started her career working a corporate job but was soon laid off. Prior to losing her job, Austin grew an obsession for candles.

She wanted to start her own candle line but didn’t have the resources, knowledge, and finances to get started. She devoted her time to researching the business of candle making and eventually raised the money on her own to begin Lillies Candles, which she runs full time.

The company offers 18 different fragrances, including Volcano, Kiss Me, Gentlemen, Mahogany, Watermelon, Blueberry Cheesecake Patch, Sugar Crystal, and Clean Cotton. Austin’s favorite is Kiss Me, a collective of scents, such as grape, raspberry, and rose.

“I just launched Kiss Me in April of this year, and it has become my most popular and bestselling candle fragrance,” she said.

Asked what makes Lillies Candles unique, Austin said, “My fragrances are quality fragrances that are tested numerous of times before I sell them. [Also], my packaging labels, [which I create on my own], are filled with colors to attract the eye.”
Austin’s ultimate goal for Lillies Candles is to offer a larger variety of candles and to sell them nationwide. “Through my scents, I want to gain and retain customers,” she said.

To learn more about Lillies Candles and the company’s next pop-up shop, visit lilliescandles.com.