By Joseph D. Bryant
For The Birmingham Times

Summer break was anything but a true “break” for Reggie White, Alabama’s 2022-2023 Teacher of the Year.

“My calendar is filling up with speaking and professional development opportunities, and I’m looking for ways to forging collaboration between stakeholders to enhance teaching and learning.”

White will be absent from his classroom for the upcoming school year which begins Monday, August 8. He will travel the state as an ambassador for public education; however, he’s worked non-stop since the spring.

This summer he spoke to educators at the Mega Conference 22, held July in Mobile AL and the Alabama Education Association Leadership Conference held June, also in Mobile. “I have also been speaking with aspiring, new, and veteran teachers across the state,” he said.

In May, White was selected from a field of 150 highly-skilled educators from across Alabama to be named TOY. Soon, he will begin work on his application as Alabama’s candidate for National Teacher of the Year, which will be awarded in April 2023.

He ended last school year as a hero at Washington K-8 where a celebration and farewell included the excitement of a dance troupe and words of commendation from local and state leaders.

“It is my prayer that I make a difference and help inspire and give hope to teachers and educators throughout the state,” White said at the time, standing before the crowd of well-wishers that included his mother. “I am so grateful for this opportunity.” 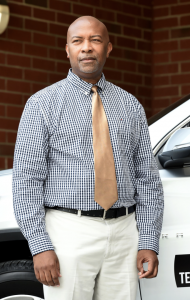 While White, 53, was heartened by the moment of celebration, he is most comfortable inside the school just a few yards away in his classroom where students enter daily to sounds of soft jazz and portraits of American heroes covering the walls.

Over the years White has perfected his method of creating an open and calm environment for his students, beginning with the music. The morning begins with a personal greeting at the door from White, then conversations with the students about their previous day. His reasoning is simple.

“You never know what a person has gone through the night before,” he said. “When they know they have a teacher or adult friend that they can call on and talk to about their situation, who is willing to go all out for them, that has been one of my biggest reasons for being here and doing what I do.”

Those conversations set the tone for the day before he goes into the core lessons, he said. White in essence is teaching social and emotional skills to young students which are also required for success, along with the academics found within the textbooks.

White’s own image is not yet among the portraits including former President Barack Obama, poet Maya Angelo, playwriter Lin-Manuel Miranda and school namesake educator Booker T. Washington, yet he is already lauded as an example for his students.

“He has been a mentor and a model for so many of our young people and for our teachers,” said principal Antonia Ishman. “Now, as Teacher of the Year, he has an even greater platform to shine and showcase his talents. He has so many strengths and strategies that he shares with our students each and every day.”

White smiles as he talks about the source of his early success, his parents, Mary Louise White and the late Walter White Jr.

“There were a lot of things that they didn’t have to speak and tell us, we just knew there were certain things that we couldn’t do,” White said referring to himself and his two brothers and sister.

Growing up in rural Choctaw County in Southwest Alabama, White said his parents always stressed the value of education. His older brother was the first to attend college at Alabama State University, followed by the other three. White said it was all part of his father’s plan. Once the older brother went to college, Walter White knew the others would follow.

It was at Alabama State that White discovered his passion for teaching. He was a member of the Baptist Student Union and was given an opportunity to travel to San Jose, California on a mission trip.

“I got a chance to help kids learn English. That’s when I knew I wanted to major in education,” he recalled. “It was like a calling.”

Until that point he was undecided about his future, changing majors several times. He joked that by the time he had found his calling in education he had already declared every other available major at Alabama State.

Shortly after the mission trip, White’s decision was solidified when he saw an education recruitment commercial that showed a student and ended with “we need you.” He felt as though the voice was talking directly to him.

Graduating Alabama State in 1996, White made his career in Birmingham City Schools, first at Avondale Elementary School. He earned his National Board Certification in 2007 and arrived at Booker T. Washington in 2018.

“Birmingham is just a perfect fit for me. It has allowed me to reach children that need me to be a role model,” White said. “The children need me, and I need them.”

Even after more than two decades, White remains excited to hear from students, past and present. He said students from his elementary school days still reach out to him to give an update and say thank you. Even some of the problem students who have to be disciplined for poor conduct ultimately understand his best intentions, White said.

“That’s one of the best parts, hearing from former students,” he said. “I love the children and I want what’s best for them.”

Lessons continue even at home, where White is a single parent of a 15-year-old son and two foster sons, ages 12 and 7.

While White will be absent from his classroom for the upcoming school year – will travel the state as an ambassador for public education — he is already talking about his return to Booker T. Washington.

“It is going to be different being out of the classroom, but everything I’ll be doing will impact the classroom,” he said. “The classroom is where my heart is. I’ve had numerous opportunities to do so many other things, but teaching and learning is what I was called to do.”