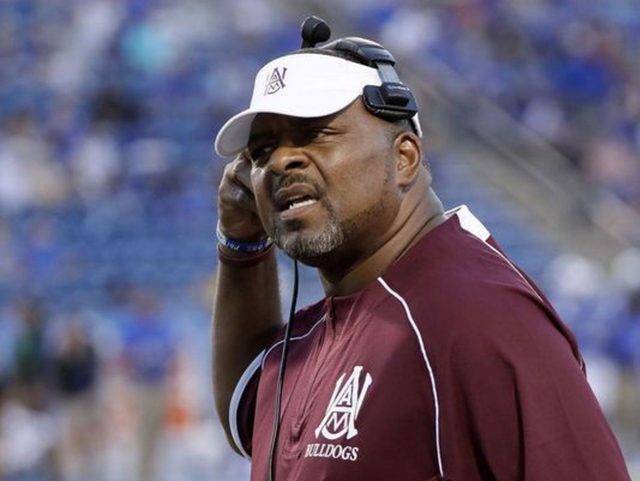 Florida A&M football has been without a key piece to its coaching staff since the Rattlers’ season-opener at North Carolina last month.

James Spady — FAMU’s associate head coach/tight ends coach and former Alabama A&M head coach — has been away from the team since suffering an undisclosed medical emergency that caused him to lose his vision during the Rattlers’ Week 1 game at UNC on Aug. 27.

After being transported to the North Carolina Medical Center, Spady was placed in ICU for seven days. He then spent two days in a step-down unit before being transported home to Tallahassee by his wife, Barbara Tatum-Spady on Sept. 5 — nine days following the FAMU-UNC game.

The prognosis for Spady’s vision is unknown, but the family was notified it could take between one to six months for his vision to fully return.

Hannah Henry — wife of FAMU offensive coordinator/offensive line coach Joseph Henry –  organized a GoFundMe on Sept. 19. The goal is to raise $20,000 to assist with medical expenses and home modifications the Spady family will endure.

Spady is appreciative for the support since his condition was shared on social media.

“I don’t even have the words to say how thankful we are for everybody’s thoughts and prayers,” Spady told the Democrat.

“At the end of the day, it’s all about my recovery. I got a long way to go in terms of my blood pressure and my sight has not come back yet. There’s a little bit of a struggle head to get back to zero and those prayers and thoughts are certainly going to help me towards that.

“My family is feeling the same way that I am and they’re excited that so many people are putting us in their prayers.

“I certainly feel the love.”

Next Steps to Recovery

Though his vision has not improved since the Aug. 27 incident, the family is remaining hopeful as they prepare for additional testing in the upcoming week.

“We’re hoping that the blood behind his eye dissipates sooner rather than later,” Barbara Tatum-Spady said. “(James) was given a timeline anywhere from a month to six months, and we’re at a month now and his vision hasn’t changed.

“He will see a specialist next week and we’re hoping we’ll get some more positive information at that time as well.”

Just like how he coaches, Spady is practicing mental toughness through the ongoing process.

As he prepares to meet with doctors, he will trust their judgement in order for him reach full health.

“Spending nine days in the hospital has a tendency to make you a little bit weaker,” Spady said. “I’m trying to get a little bit stronger everyday and make sure I do what these doctors are telling me because I’m hard-headed.

“If I could do all the things that they’re asking me to do, and develop a new norm for my life, maybe my health can come back better and stronger.”

‘Coaching Is My passion’

Spady is ready to get back on the sidelines with his squad.

An All-WAC offensive lineman at UTEP, followed by 30 years of coaching experience, he’s optimistic he will return to the sidelines.

“Football is my passion. Coaching is my passion,” Spady said. “The goal all along has been to put myself back in position to get back to my normal life to mentor young men and compete.”

Before joining FAMU’s in 2018 as part of Willie Simmons’ inaugural coaching staff, Spady was the head coach of the Rattlers’ Saturday opponent — Alabama A&M from 2014-2017. FAMU won the game 38-25.

During the Rattlers’ game-week preparation, Spady visited coaches and players at Galimore-Powell Fieldhouse.

“I got excited when I got the chance to be around our coaches and players,” he said.

“I imagine that’s going to be the case every time I get around those guys and that’s motivation for me to get right and bounce back.”

“I’m going to try to make it out for the game to support the kids and the other coaches if I can,” he said. “I don’t know how much I can see, so I don’t know what kind of experience that’s going to be, but it’s against my old school and I’m more than a little bit interested.”

Though Spady isn’t with the team physically, his energy is still felt.

Simmons has been active in keeping in touch with his fellow coach while delegating tasks to other assistants in Spady’s absence.

“Coach Spady’s been here with us our entire time. He’s one of us and has been a staple here for a long time,” Simmons said.

“Our thoughts and prayers are with him as he recovers. I’ve talked to him and he’s in good spirits. He really wants to be out here with the guys and we want him to be out here. But, his health and safety is the number one priority. Barbara, his wife is taking good care of him at home.

“He’s resting up and doing everything he needs to do to try to get himself back with us. But in the meantime, we’re going to continue to hold it down for him. Every coach has picked up an added responsibility.

“Spady is with us in spirit even if he’s not with us physically.”

Gerald Thomas III covers FAMU athletics for the Tallahassee Democrat. Contact him via email at gdthomas@gannett.com or on Twitter @3peatgee.