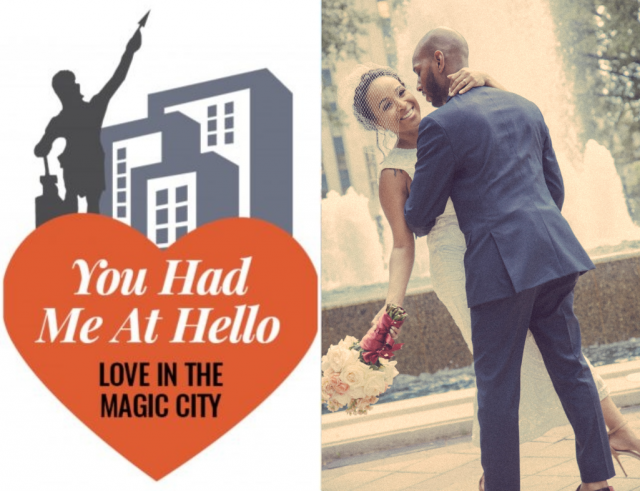 “It was a short introduction, we didn’t even exchange numbers that night. I was kinda skeptical, so I was like I don’t know about this guy. But the next time I saw him at Martini’s on college night, he was wearing a full tuxedo and I was like what is he doing, and why is he in here wearing a tuxedo?” she laughed.

Alvin explained why he had on a tux: “It was ladies’ night, and we had champagne and was giving out roses,” he said. And he made sure to woo Jennifer, and at the end of the night “…we went to Al’s Deli on the Southside and we stayed up talking till like 5 a.m., and we’ve been inseparable ever since,” said Alvin.

First date: The next weekend on a Sunday. The pair went to Alvin’s church, Sixth Avenue Baptist Church in Titusville, to lunch at Magic City Grill [in downtown Birmingham], and a movie in Hoover’s Patton Creek.

“He asked me if I would like to go to church and that was a game changer for me,” Jennifer said.

“When dealing with somebody that I was serious about, I learned to check out values I wanted in a wife– church, family-oriented, good with kids, easy-going– and I liked to test out dates and put Jenn in the environment of things we’d do as husband and wife …fun activities, fun things that would have us laughing,” Alvin said.  “I liked to do stuff out of the box for our age and going to church and Magic City Grill was something that I felt was unique and that other dudes wouldn’t do.

“[Going to church] is not the first thing you hear from a guy to do for a first date… being that he wanted to go out during the day, it made me feel like he cared more about me and my values and was looking to see how we would be compatible in the other areas of our lives. That really reeled me in, he got me with that one,” Jennifer said.

The turn: “For me, it got serious pretty quickly, we just meshed, it felt like I had been with him for years and we had only known each other [a few months]. But our first Valentine’s Day [2012], is when I started thinking long-term,” Jennifer said. “That day he started it off with a little note that said be dressed by this time, and that we were going to a fancy place… He took charge, he didn’t ask me what I wanted to do, it was the difference between dating a man and a boy. We stayed at Ross Bridge that night, and the next day we went to Sip N Strokes and out to eat. It was all really fun; we had a good time that weekend.”

Alvin said he decided he’d marry Jennifer before ever meeting her.  “I had seen her on Facebook, and she was on the dance team at Miles with my friend Michelle, and I called [Michelle] and asked, ‘who is this girl, and why haven’t you brought her around?’ [Michelle] said [Jenn] had a boyfriend, so I left her alone… After “I finally saw her in the club, she had broken up with her boyfriend, and I was like ‘Lord, you gonna give me what I want this quick?’ So for me, it was serious from the night she saw me in the club wearing the tuxedo . . . it was a wrap.”

The proposal: “At that point we had Zander [their son], and we wanted to get married the entire time but wanted to wait till we got financially stable, but then decided that the best thing to do was elope, and that’s why we decided to go to the courthouse,” Alvin said.

The wedding: At the courthouse in downtown, Birmingham, officiated by a courthouse clergyman. Jennifer wore a white lace dress with a classic short veil headpiece, and Alvin wore a navy blue suit with blue suspenders and a gold bow tie. They were surrounded by their closest family and friends.

Most memorable for the bride was their reception at Brio’s in Brookwood Village “because all of our friends were there… I felt like I was at home. I didn’t feel overwhelmed, it felt natural and when I look back at those pictures I remember the feeling of that moment,” Jennifer said.

Most memorable for the groom was recreating a photo shoot at the courthouse after taking their vows. “One of my good friends did a photo shoot with me and Jenn when we were dating, and he was the photographer at our wedding so we recreated that photoshoot. And having Zan there made it all connect because he was the reason why we were there. We loved each other and we were building a family,” Alvin said.

Looking back, Jennifer said the wedding date was “heaven sent.”

“We didn’t know what made us choose May 19th, but I went back to our message thread on Facebook and I saw he had sent me a message [that I never opened] on May 19, 2011, and I was like wait, this is our wedding anniversary. Some may call it fate, but I call it God, he was truly heaven-sent,” Jennifer said.

Words of wisdom: “Listen to understand, that’s one of the things that I still have to work on, but that’s a big one,” Jennifer said. “Trying to listen to understand and not from your point of view is one of the biggest things when it comes to healthy communication. That’s vital for any relationship, especially in a marriage.”

Alvin said, “Be ready to shed layers of yourself in order to grow new layers. You gotta shed those layers in order to find yourself and grow with your partner. If you try to go into the marriage and do the same things that you were doing, and you’re not willing to sacrifice, that’s when a lot of couples quit because it’s hard for them to adjust to the new changes of being married, which is sacrifice.”

Happily ever after: The Millers have two children, son, Zander, 5, and daughter, Zola, 3.

Jennifer, 32, is a Mobile native, and Lillie B. Williamson High School [Mobile, Ala.] grad. She attended Miles College, where she earned a bachelor’s degree in environmental science, and is currently in pursuit of her master’s degree in health care management at Capella University [online]. Jennifer works as an insurance professional, and board/organizational member of Chocolate Milk Mommies.

Alvin, 33, is an Anniston native, and Anniston High School grad. He attended the University of Alabama at Birmingham [UAB] where he earned a bachelor’s degree in psychology, owns ‘The Shoe Clinic’ in Birmingham and Anniston, and works as a contract Healthy Home Evaluator for HUD. Alvin is a member of Kappa Alpha Psi Fraternity Inc.