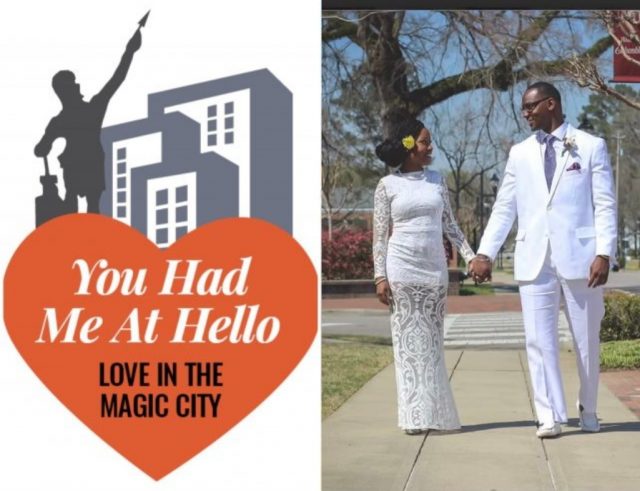 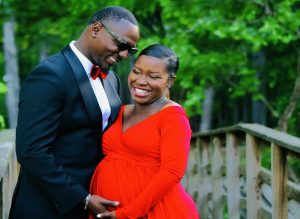 Alphonso was in grad school at the University of Alabama and Auri was completing her senior year at Miles College when they met during their respective internships at the organization.

“One day a week all of the interns would come together with the clinical director and talk about the progress [of our cases] … In social work, there are not a lot of guys, and the clinical director just kept talking about Alphonso and his [accomplishments] and we were like ‘yeah whatever, who cares? But Alphonso was the only Black guy in there, he had a nice suit on, so my friend and I kept looking at him…” Auri said.

“After the supervision [discussions with the director], he drove around the building to see where I was because I watched him drive by leaned over looking at me,” she laughed.

The next day Auri found a business card on her car with a note: “This is the guy you were eyeing in supervision, when you get a chance, give me a call.’ I thought that was very arrogant, but I called him, and I told him that somebody told me you were trying to break into my car,” Auri said, with a laugh.

“I’ll be honest, I was not trying to find out what car she was driving, I wanted her to see the car I was driving; I was in a foreign whip! She fell for the bait, that’s why she called,” he laughed. “Based on the physical attraction, we were both feeling each other… when you see an attractive woman you automatically assume she’s spoken for, so you try to be subtle, you don’t want to be a creep… We were working in two different [areas] that’s why I left the note. It would’ve been too obvious to do it after our supervision meetings…,” Alphonso said.

First date: January 2012, at Taziki’s on the Southside. “We met there, he was in the process of moving into a new apartment and we talked about that and his new job,” Auri recalled.

“That led us to talking about being social workers and why we wanted to become social workers. I told her about my experiences being in foster care, and she had an experience that was relatable,” Alphonso said.

“We realized early on that we had a lot in common. That first date was really

good, but some kind of way we stopped talking…,” Auri said.

“We had both just gotten out of serious relationships and it was still very fresh,” Auri added. “We went on to finish the internship, but never went on another date.”

That May, Auri invited Alphonso to her graduation party.

“I went to the party because she invited me, but I wasn’t sure [where we stood] … I felt comfortable enough to go, but I didn’t plan on staying. I bought her a bottle of [whisky] as a gift and planned to slide back out, but when I got there, she made me a plate, and started introducing me to everyone [and it caught him off guard] … she never left my side…,” Alphonso said.

“There was nothing but family there, I treated him like he was my guest. I was nice to him, but I wasn’t necessarily catering to him, I was just making sure he was good. I guess he wasn’t used to that,” Auri said.

Two weeks later Auri started grad school at the University of Alabama, which is where Alphonso was also in grad school and in the same program. The two began dating and seeing each other frequently.

The turn: “A month into us dating, my nephew came to live with me. My sister had a son, and she was in a bad space at the time so my nephew stayed with me for the summer, and Auri really helped me,” Alphonso said. “She helped me find a day care for him, helped me get him to and from daycare . . .  We kinda became an overnight family. It was like she was mom, and I was dad, and that was how we became serious.”

“Both of us had crazy childhoods, so children have always bonded us. Anytime a child is the focus, it unites us,” Auri said.

The proposal: Feb. 7, 2016, during the Super Bowl halftime show at Alphonso’s father’s house in Forestdale.

“I should’ve known something was up, everybody was there. We’re known to have epic house parties, before the kids, we’d have Christmas, Halloween parties… but [friends and family] traveled to come to this party, and it wasn’t out of the ordinary to have a party big Super Bowl party, it was out of the ordinary to have it at his dad’s house,” Auri said. “This was the year that Beyonce’ performed the halftime show with Bruno Mars, and I love Beyonce’, so at halftime I was ready [for her performance]. But [at halftime] instead of seeing Beyonce’ on the screen it was Alphonso on the screen. He made a video, and he talked about how much he loved me, and the reason he wanted to be with me and marry me… it was really cool,” Auri said.

“When the video went off, obviously I knew what he was about to do by this time, and he started trying to [do some more talking] and I was like ‘Nah, go on and get on down there [on your knee] if this is what you about to do, go on and do it right,” she laughed.

The wedding: At the Shelby County Courthouse in Columbiana. Auri wore a white lace dress and Alphonso wore a white suit.

“We had planned to have a big wedding that September, we had a wedding planner, had selected a venue and everything, but one day in March I woke up and said I want to get married next week. So, we went to the Columbiana courthouse. We had close family and friends there,” Auri said.

Most memorable for the bride was a talk with her dad. “My dad lived in Atlanta, and that morning he came and picked me up and we went to breakfast [before the wedding]. He said I know that I’ve probably been the only consistent person in your life, and I’m glad you’ve found someone as consistent as me. At that time, I didn’t realize or appreciate [Alphonso’s consistency], but I do now . . . I was in good hands,” Auri said.

Most memorable for the groom was seeing his sister’s display of emotions.

“My sister is one of the hardest people I know, and I’ve never seen her cry, but the day I got married she boohooed like a baby… [My sister] was the number one woman in my life. If I called her, she took care of me. Fed me when I was hungry, washed my clothes… It was like her son was getting married, we rocked hard for years,” Alphonso said. “Auri is the only girl she’s ever liked, and she no longer had to worry about me in the same way Auri’s dad no longer had to worry about her.”

The couple honeymooned on a cruise to the Bahamas for four days, and on land in Miami for two days after the cruise.

Words of wisdom: “Be intentional. Give grace, be forgiving and understanding. You need forgiveness and you want that same grace in return,” Auri said. “Every day you have to actually want to be married, it’s not easy, so you have to be intentional. It’s so easy to say I don’t want to do this anymore but being intentional and doing it regardless of how you feel, over time gets easier after staying in it and putting in the work.”

Alphonso said, “You have to give your significant other time to grow into a wife or a husband. Saying ‘I do’ on your wedding day, magical dust doesn’t flow over you and now you become this enchanted person. I was never a husband before I was a husband, so I’ve made several mistakes as an individual and as a husband. But [my wife] gave me grace and what did I do? I became a better husband, and she became a better wife. But she had to identify for herself what that [being a wife] meant for her.

“Oftentimes, we say we want a thing, or an experience, but are unsure of what it requires to have it. People look at us all the time and say ‘wow you guys look so happy’, [There are] intentional sacrifices that we make to experience this happiness.”

Happily ever after: The Underwoods have two children, son, Alphonso Jr., 3, and daughter, Arial, 1.

Auri, 32, is a Pratt City and Atlanta GA native who attended Chapel Hill High School [Douglasville, GA], Miles College and the University of Alabama, where she earned bachelor’s and master’s degrees in social work, respectively. Auri is a member of Delta Sigma Theta inc. and works as a social worker at the Birmingham Veteran’s Administration.

Alphonso, 34, is a Montgomery native, and Robert E. Lee High School grad [Montgomery]. He attended Alabama State University, and the University of Alabama, where he earned a bachelor’s and master’s degrees in social work, respectively. He is a school social worker [care specialist] for the Jefferson County Board of Education.