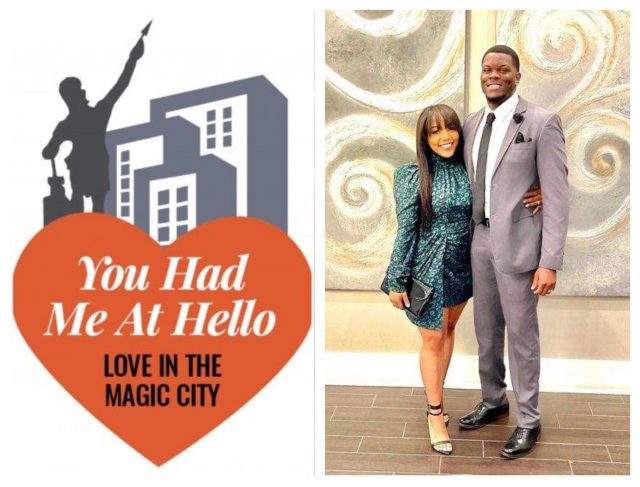 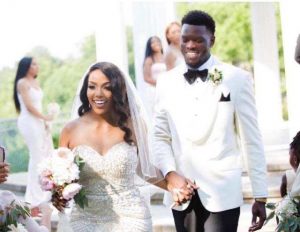 Met: November 2012, at the Birmingham Water Works Board, Jonathan had just become a field tech, and Amber was a bankruptcy specialist. “We worked under the same management and he would have to turn in work [documents] at the end of the day and everyone would always try to get us to talk, but we were both disinterested in talking to a co-worker, but we caught eyes, and there was a little vibe,” Amber said, “and he invited me over to watch [Barack Obama’s election to a second term as president].

“I was trying to use a lame excuse to hang out, I was like ‘hey we just got a second term, let’s celebrate,’” Jonathan recalled. “She was definitely a little cutie, she stood out. I had literally just got promoted to that position [as field tech] so I was trying to play it cool…”

“The thing that set him apart was instead of him just complimenting my looks, he gave me challenging conversation. He talked about things other than the catch topics that most guys try to get your attention with, and he was tall, dark, and handsome,” Amber laughed.

First date: The pair had hung out a number of times, but in January 2013, he took Amber on a trip to New Orleans. “I wanted to spend some time with her so I invited her [on a road trip]… At the time, I wanted to show off, so it was one of those things but she was always good company and I wanted to try something different,” Jonathan said.

“He definitely made an impression,” Amber said. “He was different. Instead of the typical dinner date, he wanted to give me an experience, and I appreciated that because an experience is more worthwhile.”

“While we were on the road, I saw an old school car, and I [commented about it] and he was like ‘do you want to stop and see the car?… that’s what we’re here for,’ it’s about experiences.”

The turn:  They were not exclusively dating and in late 2014, Jonathan had an encounter with someone else and learned of his daughter, Jordyn’s, coming arrival. He shared the news with Amber and expected their relationship would end, but she reacted much differently than he anticipated.

“She didn’t react like it was cool … but that wasn’t the end [of us]. After my daughter was born, Amber has been there every step of the way and she’s treated her like she was ‘our’ daughter. Amber and my daughter’s mother are very cordial … and it showed me things about [Amber] that I already knew… she was a great girl, but hard times will show you who people really are and you learn the true testament of who someone is.”

Amber said, “I love the muddy parts of our relationship, all the good and bad that got us to where we are today. Nobody is perfect, no relationship is perfect. When he told me that he possibly had a child on the way, I was [shocked], but instead of the typical response from a woman… it was almost an out-of-body experience because I wasn’t concerned with my feelings at the moment because he was so distraught. He was telling me this news in tears, and that showed me who he was as a man…He handled me and the situation with care. He allowed me to have my moments of anger, but at that point [it defined] who we were because we saw that we could no longer be causal about our relationship. He never teetered on the fence about how he felt about me, or played with my emotions, we just never [fully committed], and before [he broke the news] I always felt like I was the only girl in this man’s world… We had told each other we loved each other years ago, but it took that moment to get us on the same page [and define] our route,” Amber said.

The proposal: On Jonathan’s birthday, March 31, 2017, on Redmont Hotel’s rooftop in downtown Birmingham.

“It was my birthday, so I got a lot of our friends together, and I had her thinking she was collaborating with all of them to throw me a surprise party, but I was planning every step, and she thinks she’s planning everything,” Jonathan said.  “[We went] to the Redmont Hotel and we’re having dinner, and she’s texting all of our friends trying to make sure they’re at Club M in Ensley for ‘my surprise party’, and all while we’re eating all of our friends are secretly coming to the Redmont and walking right past us in the restaurant and going straight up to the rooftop, I’m seeing them as they sneak in. [After dinner] I said, let’s go to the rooftop because I’ve never seen the Alabama Theater from this view before.’ We get up there, and all of our friends are there, and Amber [is looking confused]. So, my best friend comes up to me and gives me a gift bag with the ring in it, but it looks like a birthday gift to me. I took the ring out and told Amber how I feel about her and proposed to her right then and there. I was very unselfish [on my birthday],” he laughed.

“He was facing the street view and had me facing the wall, but I was thinking like why is he on his phone and we’re having dinner, this is supposed to be a moment,” Amber laughed. “And I was like ‘Amber chill, it’s his birthday, everybody is probably texting him Happy Birthday.’ But we get upstairs and I see all of our family and friends, and I was like, ‘oh my God! I knew it was coming, but I didn’t think it was going to be on his birthday.’ I was appreciative of how he planned it out, it was beautiful.

The wedding: At Sybil Temple in Vestavia Hill’s, officiated by Amber’s brother Bradley DuPree. Their colors were ivory, coral, and gold.

Most memorable for the bride was their vow exchange. “We wrote our own vows, and when he said that he would share his last piece of sweet potato pie with me I was like ‘ooh, ok!’ because I know how much he loves sweet potato pie. I’m a goofy individual and I appreciated his humor,” Amber said.

Most memorable for the groom was their first look. “When I first saw her in her dress it was in front of the wedding party. We were taking pictures, and Amber walked up and tapped me on my shoulder and when I turned around I just thought she looked really beautiful.

The couple honeymooned in Aruba: “Riding the coastline on the ATVs was beautiful. The scenery and the culture were grounding. It put things in perspective, it was a breakaway from the norm, and a realization of what was to come in our new lives together,” Jonathan said.

Words of wisdom: “Remain coachable, you can always learn from one another. Always check in with one another [in regards to] where you’re at in the marriage, what’s your love language, how am I doing as your spouse, and be open to feedback,” Amber said.

“If I were talking to a young man, I would tell him that the only thing you can count on in your marriage is change. Things will change, but the best people adapt with the change. It’s like double dutch, you gotta jump in and change with the rhythm of the relationship. Find out what your solid ideals are, whether it be faith, or family. Once y’all figure that out, when things get hard you can go back and meet there. And definitely keep God first,” Jonathan said.

Happily ever after: The Hasberry’s have two daughters, Jordyn, 7, and Demi, 2, and attend Faith Chapel Christian Center in Wylam.

Amber, 32, is a Titusville/Homewood native, Homewood High School grad, and attended Jacksonville State University where she studied business administration. She is currently pursuing a bachelor’s degree in business management at Faulkner

University online, and works as a customer specialist III, at the Birmingham Water Works Board.

Jonathan, 36, is a West End native, and Arthur Harold ‘A. H. Parker’ High School grad. He attended Jefferson State Community College where he studied computer science and has worked at the Birmingham Water Works Board for 15 years where he currently serves as a team lead field inspector.