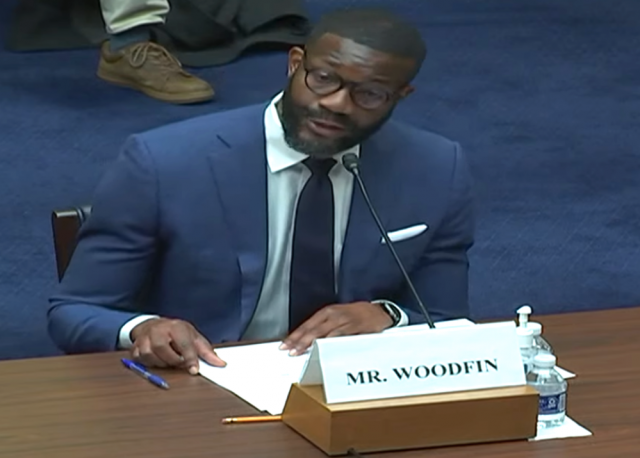 Testifying before a House Oversight Committee on Tuesday, Birmingham Mayor Randall Woodfin called out a GOP Congressman who compared the cannabis industry to “slavery” and said “words matter.”

“While I’m on record, I would just like to say to you directly, your committee members, that putting cannabis and slavery in the same category is patently offensive and flagrant,” said Woodfin before the Civil Rights and Civil Liberties subcommittee of the House Oversight Committee.

The mayor was responding to U.S. Rep. Pete Sessions, R-TX, who said earlier in the meeting, “The product is being marketed. The product is being sold. The product has been advocated by people who were in it to make money. Slavery made money also and was a terrible circumstance that this country and the world went through for many, many years,” Sessions said.

Woodfin spoke at a congressional hearing on “Developments in State Cannabis Laws and Bipartisan Cannabis Reforms at the Federal Level.”

U.S. Rep. Nancy Mace, R-SC, a vocal advocate of marijuana legalization, said Sessions’ remarks were “a disgusting comparison” and that the prohibition of cannabis resulted from racism.

“The federal government used a prohibition of cannabis to investigate and raid communities of Black and brown African Americans across the nation. They used it as justification to go after those individuals in those communities,” Mace said.

Chairman of the subcommittee Rep. Jamie Raskin, D-MD, said he hoped “there was some confusion” in Sessions’ remark.

“I would begin by associating myself entirely with [Mace’s] remarks beginning with your repudiation of the peculiar analogy between slavery, which is the most horrific mass crime in American history, with cannabis or cannabis use,” Raskin said. “I think we can all disavow that, and we apologize that that the lectern was used for that purpose at some moment today.”

Woodfin and several other leaders in the national movement to decriminalize marijuana were in Washington to discussion potential legislation and policy change around the drug.

Woodfin said mayors can only do so much without the federal government.

“The state-by-state patchwork leaves too many Americans out of reach from the promise presented by ending the federal prohibition on cannabis. Congress must act now, during this lame duck session, to get SAFE Plus done because we need expungements, normalized banking and capital market access and more research now,” he said.

“SAFE Plus” is potential legislation that would grant access to the U.S. banking system by cannabis businesses.

The mayor also said it’s important that the federal government address more of the existing wrongful marijuana convictions that have incarcerated many people throughout the country.

“Congress must push the Department of Justice to process far more clemency petitions such that every American unjustly incarcerated is released and given an opportunity to participate in this new industry,” Woodfin said.

Woodfin said mayors have “a meaningful role” in the push for marijuana legalization and pointed to pardons, prohibiting employers from considering marijuana in judging applicants and deprioritizing enforcement of marijuana offenses, adding that mayors can “embrace cannabis as both the moral imperative and economic development opportunity that we know it can be.”

While police in the city may disagree with his approach, Woodfin said, mayors and legislators must work using “facts and science.”

“There is no evidence that legalization leads to appreciable increases in any form of crime. There is no evidence of increased drug use by teens in states that have already legalized cannabis. If anything, legalization actually frees up law enforcement’s resources to pursue violent crime, a priority for every mayor in any urban core in our country,” Woodfin said.

Woodfin, who said he saw first-hand the experience of those being tried for marijuana offenses during his time as an attorney in Birmingham, said he feels the city has “has attempted successfully to go in the opposite direction” of Alabama, with regard to cannabis and pointed to his blanket pardons and advocacy for legalization.

“I have shared with other mayors across the state that they should use their executive power to pardon their citizens within their individual cities, but in addition to that, I’ve also encouraged the governor to, at a minimum, even if you don’t want to legalize it, you should decriminalize it,” Woodfin said.