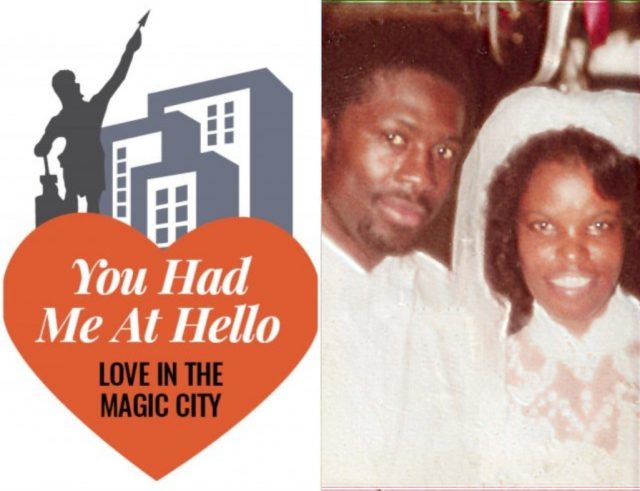 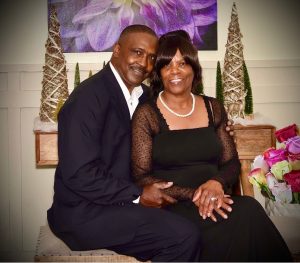 “She chased me,” Johnny said, “she came after me. But I liked what I saw and I was very interested so I went [looking for] her after she said we ought to stay in touch. She had told me where she lived, I knew it was Gate City but didn’t know which apartment she stayed in… but the Lord lead me right there.”

“He saw my little next-door neighbor playing outside and asked him did he know which apartment I stayed in, and he pointed him to me,” Carolyn recalled.

Carolyn didn’t deny the attraction she had to Johnny that night. “I had seen him two years earlier in his neighborhood while I was hanging out with a friend, and I liked what I saw and remembered who he was.”

“That was the spot to go,” Carolyn said. “Johnny had been to the house several times before we went out on a date, we did some sofa sitting, but he worked a lot… He came and picked me up, he drove a green Ford Cougar, it was real nice. Everybody was into karate back then … so we were mostly into the movie. He was very polite.”

Johnny said he was with someone he really liked…, “so I was just trying to stay cool. She’s a beautiful lady, and back then we both had big afros. After the movie we went back to her house…she had all them brothers [there were five]…”

“My baby brother thought he was supposed to sit right there in the middle of us,” Carolyn laughed. “We stopped at Krystal’s after the movie, and Johnny bought about 15 [mini burgers], and I was like what do we need all these for? And that’s how my baby brother fell in love with Johnny because he gave him some.”

The turn: “About a year and a half into [our courtship], Johnny got saved … But before then, I asked [what] were his plans, were we going to get married? because I didn’t want to date to just be dating,” Carolyn said.

“When she came to me about what we were doing, I said, ‘yeah [we’re going to get married]’ because I believed I had found the right one and I wasn’t gonna let anybody else get her. I was happy because I had found the love of my life,” Johnny said.

“The first thing he asked me was how many kids I wanted, and I think we said ‘five’ (they have four), and I had set the date for him to propose [no later than] September of 1980. But I had started going to church with him [at Souls Harbor Deliverance Center, near the Birmingham airport]. We were so into church and into God, we had left [the topic of marriage] alone for a minute,” Carolyn recalled.

“We had already discussed it, so I knew she wanted to marry me, and I went and bought the ring, it was a cluster diamond ring, and brought it to her and told her mother I wanted to marry her,” Johnny recalled. “I didn’t know how to [propose], I had never seen it done before. I also told my family, my mom and dad knew too.

“He didn’t get on one knee, he just gave me the ring and we told my mom and that was it. Then, I asked him what date he wanted and he said June, and I said, ‘I ain’t waiting that long’, I wanted a Valentine’s Day wedding,” Carolyn said.

The wedding: At Greater Emanuel Temple Holiness Church in East Lake, officiated by Bishop Isaiah Jackson. Their colors were red and white. Most memorable for the bride was, “when we were up at the altar saying our vows. He grabbed my hand, and he took my wedding band and put it on my finger and lifted my veil and he said, ‘I love you’ and he gave me a nice kiss. Honey, he didn’t want to let go,” Carolyn laughed.

Most memorable for the groom was watching his bride walk down the aisle.

“…my mind was blown. I already knew she was beautiful, but that day she made the diamond shine brighter. I was excited because she was mine, coming down to be my wife. I can still see it right now, in that nice pretty dress, that long hair, her pretty smile,” Johnny said.

The pair got a honeymoon suite at a hotel on U.S. 280.  “It was exciting, fantastic, and awesome. She was mine and I was hers,” Johnny said.

Words of wisdom: “When you get married, some people think it’s 50/50, but it may not even be 60/40. You have to learn to compromise and communicate,” Carolyn said. “I learned in my marriage everything is not going to go my way or his. That first year is rough, but we had good counseling, and our pastor helped us a lot… Stick together through sickness and in health; my husband [became deathly ill] and I stuck with him. I helped him through the sickness and God turned that thing around… Our first year turned into 41 years for us.”

Johnny said, “Sometimes, because I was the man, I felt like I should push my authority and weight around, but I had to learn how not to be that person. Yes, I’m the head of the house, but we work together to rule the house … You can make it if you put God in your marriage. I’m still in love with my wife. I’m still excited about my marriage. I’ve been married for 41 years and I’ve never cheated on my wife, I’m not gonna give up a 99 for a 25,” Johnny said.

Happily ever after: The Collins attend Greater Emanuel Temple Holiness Church in East Lake, where Johnny serves as an Elder and Carolyn serves as the President of the Ministers Wives auxiliary, and on the Usher board. They have four children; daughters LaTasha and Johnisha, and twins, Johnny Jr. and Jonica.

Carolyn, 63, is an East Lake/Woodlawn native, and Woodlawn High School grad. She attended Lawson State Community College where she earned an associate’s degree in early childhood education and owns and operates her daycare, Bloom Grow Blossom Learning Center in Roebuck.

Johnny, 64, is a North Birmingham native and Tarrant High School grad. He attended Livingston University [near York, AL], where he played football and majored in art. Johnny retired from Bruno’s Wearhouse as a mechanic after 35 years.