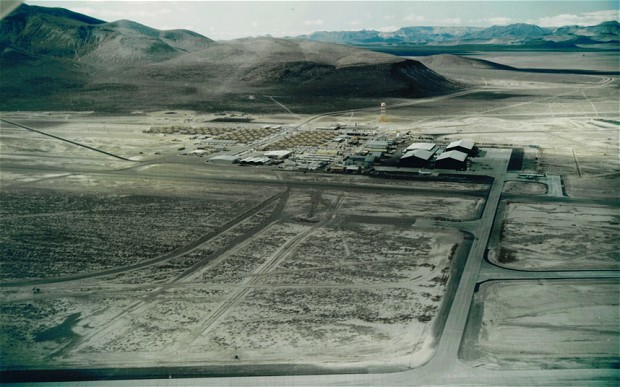 For Joe Sheahan, it’s his father — buried on a plot of land three miles from where the U-2 spy plane was perfected, according to CIA documents declassified in 2013.

This week, Sheahan visited his father’s grave site for what he thinks will be the last time, now that the U.S. Air Force wants to buy the land and has vowed to use eminent domain to get it. The Sheahan family, which has owned the land in southern Nevada since the 1880s, doesn’t like the government’s price: $5.2 million for 400 acres of land and mining rights.

The Sheahan family has owned Groom Mine, a piece of land in Area 51, for more than 125 years.

A September 10 deadline to accept the offer has passed with no agreement, and Joe Sheahan is digging in for a legal fight.

The Air Force wants the land because, after decades of escorting family members into the highly restricted space, it can no longer ensure the family’s safety during the “near-24/7 operation” at the base, officially known as “The Nevada Test and Training Range.”

“We’ve tried to do everything we can, include canceling missions when they come out,” said Col. Thomas Dempsey, commander of the facility. “And that’s a tremendous expense to taxpayers.”

That’s ironic, say the Sheahans, who claim the most danger they’ve faced was from the military itself, intimidating the family since the Air Force began taking over land here in the 1940s — today it controls 2.9 million acres.

“I didn’t create this mess, they did,” Sheahan said. “They surrounded us. We’re tired of running, tired of hiding.”

Bullets and shell casings sit on the dining room table at the home of Joe Sheahan, with a half dozen family members sitting around the table.

“They’re the .50-caliber rounds we found all over the place, all over the property,” Sheahan said. The family believes the bullets were fired from aircraft overhead back in the 1940s to intimidate the family to leave. But the Sheahans stayed, operating a mine processing mill until nuclear testing began on the range, driving them out of business, they say.

The mill was destroyed in 1954 — firebombed, the family says — likely by an aircraft engine that fell from the sky. They cite a fire inspector’s letter that “a foreign object or device may have been instrumental.”

The family sued the Air Force but withdrew the claim when family members ran out of money fighting it, Joe Sheahan said.

In a letter withdrawing the suit in 1959, Daniel Sheahan blamed the Air Force for “intentionally using our property for military test purposes and then forcing us to bring suit in order to try to protect ourselves.”

That letter fueled the next generation of distrust for the Sheahans, who claim they have been sporadically held at gunpoint while visiting their property. In July, Lisa Hegwood, another family member with a stake in the land, said her 7-year-old niece was distraught when the family car was stopped and a gun was pointed in their direction.

“It’s very disheartening to see generation after generation go through this,” Hegwood said. “It’s even worse when a child is put through it.”

The Air Force says it has no record of the historical incidents of intimidation raised by the Sheahans and says the highly restricted nature of the location requires intense security.

“Our goal is not to intimidate, especially with a family that has been good stewards over the years,” said Dempsey.

He added that the $5.2 million offer is much higher than would likely be offered on the open market, given the depressed nature of the mine. The Sheahans dispute that, and blame the Air Force for the defunct nature of the property.

The Sheahan family was given until September 10 to accept the government’s offer, but the family only responded with an email saying they’d be willing to negotiate what they think is a fair price.

The Air Force has already moved forward, saying in a statement Friday it asked the Justice Department to start condemnation proceedings, which are required to take over the land. A judge will determine a fair price after hearing from all sides.

“Everyone says ‘oh no, you’re going to come out with nothing,” Joe Sheahan said. “But I’m not going to let them take what my grandfather and father and mother worked hard for.