**HEAVY WEIGHT WORLD CHAMPIONSHIP – DEONTAY WILDER VS JOHANN DUHAUPAS plus Omar Figueroa Jr. vs Antonio DeMarco at the Legacy Arena, 6 p.m.
Saturday.  This is a great moment in Alabama. History in the Making…right here in Birmingham with premier Boxing champions and boxing at its best.

AND… if you love to laugh….

**GUY TORRY AND STEVE WILSON are in the ‘HAM, at the Stardome Comedy Club, this weekend.  You have heard of JOE TORRY; Guy is his younger brother.  Well, Guy and Steve are just as funny as Joe, if not funnier together.  They make a great team with tons of laughs.  STEVE WILSON is a rising comedian seen on BET’s Comic View, performed in England, Australia and a few other countries.  He has opened for performers such as Brian McKnight and is co-host of DL HUGHLEY syndicated radio show.  He is currently featured on Showtime’s “Andrew Dice Clay Present the Blue Show.  GUY TORRY made that transition from the stage to the screen like Richard Pryor, Eddie Murphy and a few more comedians.  Guy has starred on ‘Martin”, Sparks”, “NYPD Blue”, “X-Files’, and “American History X”.  He has toured abroad bringing laughter to the world. And, he was host to “The Kings of Comedy” original tour.  Guy has a little time left on Wednesdays to share and help with “My Friend’s House” foundation in Los Angeles where they feed, clothe and pray for the homeless on Skid Row.  Guy also is in pre-production with a documentary about “Phat Tuesday and in has several television, film, and book projects in the works.  Both Guy Torry and Steve Wilson are currently touring the country. (Check them out at the StarDome Comedy Club and tell them Gwen sent you!!)

Here are a few things to do….and ‘not to miss’ coming soon!

THIS WEEKEND AND COMING…

FRIDAY……Laughter… at the StarDome Comedy Club!

**SOUND OF MOTOWN – ALL THE HITS IN ONE NIGHT – See the WHISPERS, THE SPINNERS, and THE MANHATTANS with the Sounds of Motown, Friday, at the Tuscaloosa Amphitheater.

**STILLMAN COLLEGE SCHOLARSHIP GOLF TOURNAMENT – Join the fun at the 15th Annual Stillman College Scholarship Golf Tournament, Friday Registration is 7 a.m. and Tee-Time is 8 a.m.  The tournament will be held at the Roebuck Golf Course and will feature some of Birmingham’s finest golfers including NFL football celebrities, local community public officials and top female golfers.  There will be door prizes, raffle prizes, awards and delicious lunch.  Proceeds will go to the deserving Birmingham students to attend Stillman College.  For more information (205) 925-9373, gdennard2@aol.com, (205) 247-8145 or ascott@stillman.edu.

THEN… THERE IS MORE GOLF……

**SRMSDC GOLF TOURNAMENT – FORE IN THE FALL is Friday, October 2 at the Oxmoor Valley Golf Course in Birmingham, Alabama.  Registration is 7:30 a.m. with Shotgun start at 8:30 a.m.  There is a Southern Hospitality Networking BBQ immediately following golf.  Go to Southern Region MSDC for more.

**HOMEWOOD CHAMBER GOLF CLASSIC – The Annual Homewood Chamber Golf Classic will be held on Thursday, October 8 at Robert Trent Jones – Oxmoor Valley Golf Course. Registration and the Putting Contest will be held at 8 a.m., and the Tournament will officially begin with a shotgun start at 9 a.m. The Golf Classic supports economic development efforts in the City of Homewood. Participants will enjoy a light breakfast, full round of golf, the chance to win fantastic door prizes from area businesses, a locally sourced lunch from Urban Cookhouse and so much more.  Call (205) 871-5631 for more.

**OCTOBER 1-4…ANTIQUES AT THE GARDENS with Mountain Brook Village and participating businesses.

**FOOTBALL …..AND… RACING AT ITS FINEST AT TALLADEGA SUPERSPEEDWAY…..

If golf is not your cup of tea, football has kicked off so check out the games now until the first of the year.  AND, if you love cars, then you already know that the Talladega Superspeedway races are October 23-25 and right around the corner.

….There are always plenty of things to do around the southeast.  Here are a few things going on in town…

…Tomorrow is the last day….Check it out….

**THE LIFE OF A COSTUME: FROM PAGE TO STAGE – This exhibition is at The University of Alabama Gallery in the Dinah Washington Cultural Arts Center and ends tomorrow. The gallery is located at 620 Greensboro Avenue, Tuscaloosa, AL 35401.

NOW…on to the rest of the happenings…. THIS WEEKEND….A FEW THINGS IN BIRMINGHAM!

**RIVERBEND REUNION, LAUREN FARRAH, EARLY JAMES AND THE LATE BLOOMERS at The Nick.

**THE SOLAR SYSTEM, DEAD SEA FLOWERS, GRAND EVOLUTION and RYAN SOBB at The Nick on southside.

**BLING THE SKY, STRANGE WAVES and STEVEN KING at The Nick.

**BAAK GWAL, THE GRAND AMERICAN BREAKDOWN, and PEN PALS, 8 p.m. at the Nick.  No cover.

**WITH ARMS WIDE OPEN at the Nick.

**THE SHADY REST at the Nick.

**AT THE STARDOME… this weekend… TOMORROW…GUY TORRY  and STEVE WILSON…. St. Louis native Guy Torry climbed the show-business ladder with non-stop hustle — he started out as a production assistant on “Martin,” and now he’s performed in dozens of TV shows, movies and comedy clubs. Wilson has been seen on several television shows including BET’s Comicview, Showtime at the Apollo, and ABC’s Comics Unleashed. . He has been heard on The Bob & Tom Show, a national radio show heard in over 135 cities, Playboy Radio, and Yo on E!. Wilson has been the opening act for singer Brian McKnight and has performed for sold-out crowds around the country.

**OCTOBER 10 – UNITY BALL– The second Annual Unity Ball by the Lovely Ladies of Stewart Success is Saturday, October 10, 7 p.m. to midnight at the Boutwell Auditorium.  For more call 223-1160.

**OCTOBER 10-11 – LIFE ISN’T FAIR – NOT ALL WHO WANDER ARE LOST, a stage play by Award Winning Film-Maker/Play-Writer DERRELL LAWRENCE featuring Grammy Award Winner REGINA BELLE, Emmy Nominated SEAN BLAKEMORE, International Actor JOHN TERRELL, Lawrence (himself) and more at the BJCC.  The performances are Saturday at 8 p.m. and Sunday at 3 p.m.

**OCTOBER 31 – MAGIC CITY CLASSIC is the largest Historically Black College and University (HBCU) football game in the country. Alabama A&M University and Alabama State University play in the game annually at Legion Field in Birmingham, Alabama, and the winner could potentially earn a spot in the SWAC Championship.  Festivities surrounding the event include the Magic City Classic Alumni Pep Rally, Magic City Classic Parade, Coors Light Pre-Game Tailgate Party and the famed halftime show performed by the Marching Hornets and the Marching Maroon and White.   For more information, visit www.themagiccityclassic.com.

**OCTOBER 31 – CLASSIC SHUTDOWN –The Q CLASSIC AFTERPARTY is the Purple and Gold Commission event at the MusiQmall hosted by the Magic City Qs and Qs from all over, with music by DJ Lenny. This is the biggest undergraduate Q Party of the year for all Schools and Divine 9.   Tell them Gwen sent you.

(People, Places and Things by Gwen DeRu is a weekly column. Send comments to my emails: thelewisgroup@birminghamtimes.com or gwenderu@yahoo.com 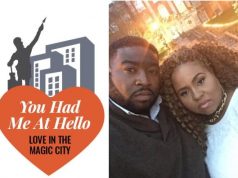