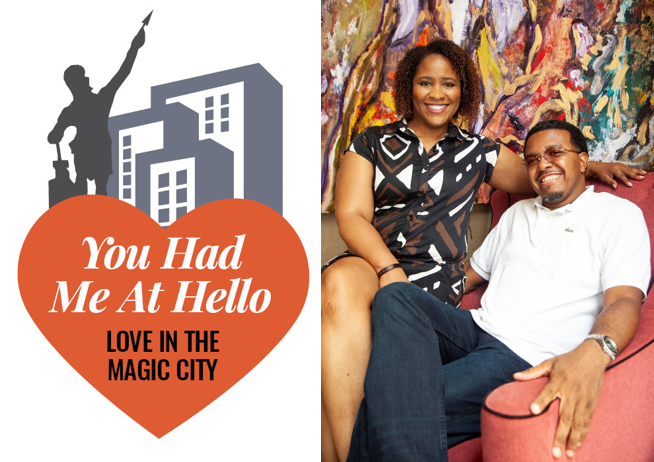 Met: Marvin and Kenya were high school sweethearts at Wenonah High School. They were both in 10th grade when they were formally introduced. Marvin noticed Kenya, who was an outgoing and popular girl, long before they met. “I would have never approached her if it wasn’t for my friend,” he said. Marvin, Kenya recalled, was the quiet type. She was used to dating flashier boys, but she had already grown tired of that. “I told my friend that he was the kind of guy I was looking for,” she said. “He was quiet and smart.”

First date: Their first date was a visit to Kenya’s house, but he wasn’t allowed inside. “We sat on the front porch,” Marvin said.  Back in those days, Marvin couldn’t drive to Kenya’s house because he did not yet have his driver license so he would sometimes hitch a ride.  And for the first few visits, he would have to sit on the front porch until Kenya’s parents allowed him in the house. “Then he could sit in the living room,” Kenya said. “That is when we really could get to know one another talking.”  Before long, Marvin was allowed into the downstairs den where there was a television. They spent many sofa sits watching television shows such as “Martin”. “I thought he was a super cool guy to hang out with,” Kenya said. “We would laugh together, just crack up off the craziest things.”  The two dated throughout high school. By the time they reached their senior year, Kenya and Marvin were trying to figure out the next step in the relationship, so they decided to both attend college in Tuscaloosa— she would go to the University of Alabama and he would go to Stillman University.

The proposal: After spending nine years together as a couple, Marvin and Kenya both knew it was time to move to the next step. “By then we were really invested in the relationship,” she said. “We were inseparable,” he said.

Getting robbed while working in his parent’s gas station in Powderly finally solidified the next step for Marvin. “We needed to make this official,” he said.  So they finally talked about getting married over the telephone one night. “I was really excited about it,” Kenya said. “I told him don’t surprise me with a ring though. I wanted to pick it out.”  In the midst of the marriage plans, Kenya’s father thought the couple was still too young to get married and not financially stable. But Kenya assured him that she would get her college degree so that she could take care of herself. Her father finally came around and persuaded Kenya and Marvin, who had planned for a small ceremony, to have a large wedding.

The wedding: Kenya and Marvin were married at the First Baptist Church Powderly. “I remember it was packed and super hot that day,” Kenya recalls of her wedding day. “I was sweating bullets,” Marvin said.  Kenya guessed on that day that Marvin and the groomsmen may have partied a bit too hard the night before. But all was forgiven when he started to cry as his bride-to-be walked down the aisle. “I didn’t cry,” Marvin joked. “Yes he did,” Kenya reminded him.

Words of wisdom: Marvin and Kenya were cautioned on being married at such a young age. But they married anyway with no regrets. Would they advise someone else at the age of 24 — the age they were when they wed – to get married. “I would say don’t do it,” Marvin said. “It worked for us, but I would still say not to do it.”  Both would encourage couples to get more established in their careers and lives before tying the knot. But it worked for them. even as they moved to Louisiana for Kenya to attend law school and as he worked. “But we waited to have children,” Kenya said. “We knew we were young and the last thing we needed to do was add a baby.”

Keeping a strong relationship requires a desire to be together.

“We are two people who want to be married,” Kenya said. “It is a daily decision to make, even when you don’t feel all gushy about each other. That is not the real world,” she said. And she added: “I fear not having him more than I feel the desire to not be with him.”

Marvin said couples have to be willing to do whatever it takes to make the relationship work.

Happily ever after: Marvin and Kenya’s bond was already strong by the time they were married, but a health crisis really tested their limits shortly after they wed. In 2001, Marvin fell ill while he and Kenya were living in Louisiana. He was diagnosed with polycistic kidney disease.  He would eventually need a new kidney. Kenya thought Marvin would not need the kidney for many years, but as his health worsened that time came sooner rather than later. Kenya learned that she was a close match and could be a donor. The couple discussed the positives and negatives, particularly the concern that they had a young son. But in 2003 Kenya successfully donated one of her kidneys to Marvin.

“The road to recovery was hard,” she said. “I was not like myself for a while.” Marvin said he was just grateful to Kenya for making the sacrifice. They enjoy dining out and cooking at home. “Being able to enjoy home is a treat,” Kenya said.  Kenya works at PayChex Payroll Services and Marvin works at CMC Steel.

The couple also spends a lot of time attending games for son Donovan who plays basketball and football for John Carroll Middle School.