Danny Carr is a survivor. Growing up in Birmingham, Ala., in the Ensley community, he had no choice.

“I was raised by my mother, a single parent, and my grandmother. They kind of kept me shielded from the outer world. At the same time, being a product of Ensley, I understand how to survive, what hard work and determination mean, and where that can get you,” he said. “I’m proud to be from that area.”

Carr had a historic 2018, which culminated with his being sworn in as the first black Jefferson County District Attorney (DA) on December 12.

“I wasn’t supposed to be here,” he said. “The naysayers would say that a young man from Ensley, from the other part of town, raised by a single mother, … [who went] to Miles School of Law, there’s no way he should be DA.”

His single mom, Regina Carr-Hope, worked as a probation officer and later became principal of Wenonah High School in Birmingham.

During a recent interview at the downtown Birmingham DA’s office, Carr said he takes his role very seriously. He’s focused not just on his job as DA but also on his role in the community as a mentor and role model for young people.

“I’ve been involved in the community for a long time, and I believe you’re blessed so you can be a blessing from that vantage point,” said Carr, 48, who can often be seen counseling youth and speaking at elementary and high schools across Birmingham. “I think a lot of kids from Ensley can see me in this position and, hopefully, strive to be the next lawyer … and know that it can be done. We’re going to reach out to the schools and figure out what we can do as an office and as a collective body to help kids stay out of trouble and make decisions that will benefit them in the long run.”

Growing up in Ensley, Carr attended Councill Elementary School and P.D. Jackson-Olin High School. He got into law because he didn’t like math.

“If you went into law, there wasn’t any math,” he said. “So, from that standpoint, I decided law was where I wanted to go. I was fortunate enough to get hired [to serve in the office of former Jefferson County DA] David Barber—and, 17 years later, I’m still here.”

After graduating from high school, Carr attended Alabama State University (ASU) in Montgomery, Ala., on an athletic scholarship for basketball.

“My experience there was great,” he said. “I played basketball, became a member of Kappa Alpha Psi Fraternity Inc. Beta Zeta chapter, and met a lot of people. I enjoyed my time in Montgomery and still have a lot of ties to the university. [Current ASU President Quinton Ross, EdD], is a great friend of mine, and [one of the] assistant basketball coaches was my college roommate.”

After graduating from ASU, Carr attended Miles College Law School, going to school at night and working as a probation officer during the day. He graduated from law school in 2000 and began working in the Jefferson County DA’s office as an assistant DA.

“As an assistant DA, your job is to go to court and try cases every day, and that’s what I did,” he said. “I worked my way up through the ranks and ultimately ran for DA.”

Carr was just beginning his career in the DA’s office when tragedy struck. His younger brother, Jackstin, was murdered in 2001.

“I feel that no child should experience the excruciating pain I felt when I saw my mother bury her son,” he said earlier this year while campaigning. “Through my misfortune, I realized that our government has a responsibility to provide just punishment to those who commit crimes.”

At one time, Carr considered running for judge, but he decided he could have a greater impact in the role of DA.

“Things just happened, and I felt like I could make a better impact [as] DA,” he said. “After being appointed [interim] DA by [Circuit Court Judge] Joseph Boohaker [in 2017], I decided to run for the position.”

When Gov. Kay Ivey took office, she removed Carr from the DA position.

He believes his on-the-job experience will come in handy.

“As an assistant DA, you figure out things as you go and learn on the fly how to try cases, how the office is run, how some of the ethics rules apply to you,” he said. “There is a lot to learn, but this is the biggest office in the state, so you learn a lot as an assistant DA.”

As you move up through the ranks, Carr said, “You try to provide some leadership to the younger people, make sure you’re prepared for court, but [you] also try to make sure you’re doing things the right way. That’s what we’re trying to do here.”

Carr doesn’t mind being recognized as Jefferson County’s first black DA, but he also wants to be remembered for getting the job done.

Click here to read about Birmingham’s Year in Review. 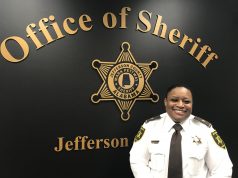