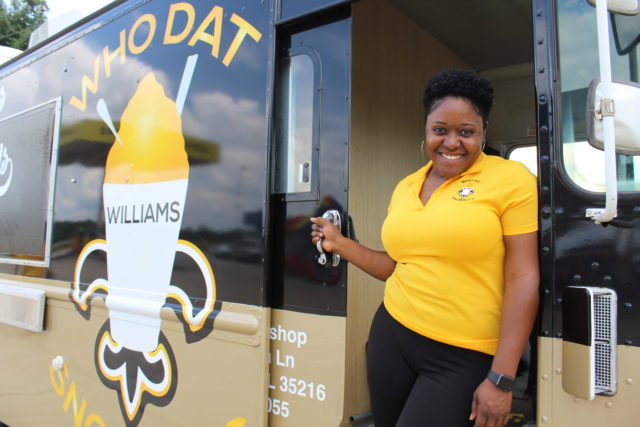 At age 18, two weeks into her freshman year at the University of Louisiana at Lafayette (ULL), New Orleans, La., native Brandy Williams’s life changed forever—when Hurricane Katrina forced her family from the only place they knew and loved.

“That time was just a blur because it was just a nightmare,” said Williams. “You’re happy that everybody is safe. Still, …all my childhood memories, … all of our videos [are gone]. … I don’t have any baby pictures to show my [future] kids because they got destroyed. We were able to save some stuff from the second floor [of our house], but everything on the first floor was destroyed.”

One thing Williams didn’t lose was one her fondest memories of growing up: the sweet taste of snow melting in her mouth after eating a New Orleans snoball. “Unlike a snow cone that is extremely hard and crunchy, a New Orleans-style snoball is very soft and fluffy,” according to Williams’s website (whodatsnoballs.com).

“I remember snoball stands in New Orleans being so popular,” Williams said. “My favorite ones were Plum Street and Rodney’s… It’s just a taste of home.”

Williams, 32, has brought a taste of New Orleans to Birmingham as the owner of Williams Who Dat Snoballs, a food truck that sells not only a range of snoball flavors but also some of her favorite hometown dishes, including red beans and rice, gumbo, crawfish pies, jambalaya and crawfish etouffee.

“[If] you would have told me three years ago that I would have a truck selling snoballs, I would have laughed in your face,” said Williams, who now puts smiles on the faces of her customers.

Putting gummy bears on top of a snoball was something Williams grew up with.

“It was only natural to do it here,” she said.

Looking back on the hurricane that brought her family to Birmingham, Williams said, “I wouldn’t wish that pain or devastation on anyone, not even my worst enemy. I wouldn’t want [anyone] to experience that.

Williams was majoring in communications and minoring in business at ULL when Hurricane Katrina hit New Orleans in 2005. She was staying in an apartment on campus when her parents came to stay with her in Lafayette, La., which is about two and a half hours from New Orleans. They stayed with her for two weeks and moved to Birmingham in September of that year.

“I went to [ULL] to be close to New Orleans [and] my parents, then they moved all the way … to [Hoover], Alabama,” she said. “[This] was probably one of the hardest things I think we ever had to do.”

The Williams family lost everything and scattered to different places. Her dad went back to New Orleans for work. One sister was in college in Oklahoma. Another sister was in Atlanta, Ga. Brandy was in Lafayette.

If not for God, Williams said, she doesn’t know how they would have survived.

After graduating from ULL in 2009, Williams said there was no doubt about where she would live.

“We had been through a lot, lost our whole house, and got displaced. Then, a couple of years later I lost my sister unexpectedly,” Williams said. “I had to come home. … Home is where my family is.”

Williams’s sister, who attended and graduated from an Oklahoma college in 2008, became ill while the family was living in Hoover, so coming back to her family meant everything to Williams because she was able to see them and make sure they were doing well.

Coming to Birmingham also meant bringing a slice of New Orleans along with her—so Williams started her business in the summer of 2017 with a table and a tent.

“I thank God for my parents, [Blake Williams Sr. and Donna Williams],” she said. “My dad believes in me more than I believe in myself. If it weren’t for him, I probably … wouldn’t [be where] I am now. … He got all of my business licenses and registered everything I needed. … [My parents] have been behind me 100 percent since the moment I said this is what I wanted to do.”

Her parents help in another way, too. Williams still works a full-time job as a help desk analyst at a local financial software company. Technology and computers were an occupation before she started her business, and her family helps run things while she’s in the office.

Williams Who Dat Snoballs operates mainly during the summer. Because of the heat, they mainly sell snoballs and crawfish nachos; on Sundays, they sell New Orleans cuisine specialties. In the colder months, the family sells food full time—but that doesn’t stop them from selling snoballs.

“I can’t pull up somewhere and be like, ‘Oh, we’re not selling snoballs. As long as I have this truck and it says Who Dat Snoballs, I’ll put ice in the machine and crank it up. Even if it’s just one, … I’m going to always be Who Dat Snoballs,” Williams said.

Another positive about the food truck for Williams: it helps her meet new people and gets her out of her comfort zone. That’s a benefit for someone who’s not from Birmingham because her business interactions give her an opportunity to network.

Williams Who Dat Snoballs is usually set up at Exit 1 in McCalla at the Sunoco gas station on Wednesdays and Thursdays, from 5 p.m. until 7 p.m., and on Fridays, Saturdays, and Sundays, from 3 p.m. until 7 p.m. They also travel to farmer’s markets, and Williams said they’ll still do table and tent.

“We haven’t forgotten where we came from,” she said.

For more information on Williams Who Dat Snoballs, visit whodatsnoballs.com. 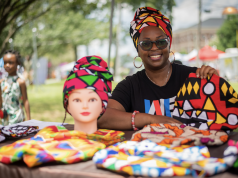 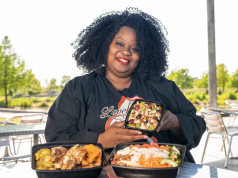 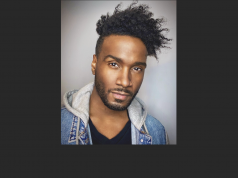