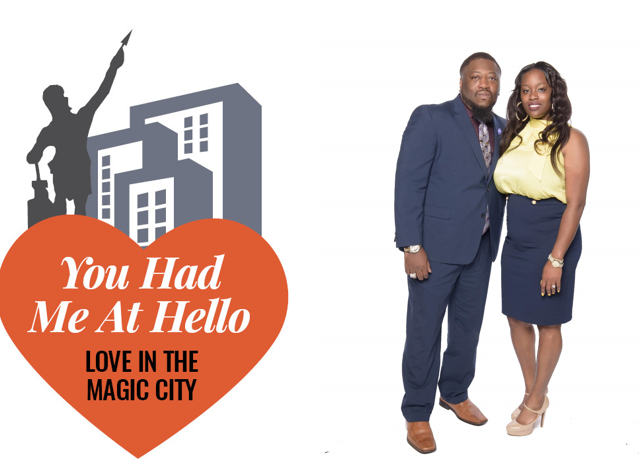 Met: Kenisha and CJ met via Facebook in 2016. After a series of public exchanges in the comments under his posts, CJ decided to inbox Kenisha to gauge her interest and relationship status.

“We don’t know how we became friends on Facebook, but I started seeing some of his inspirational posts and I guess it’s safe to say I started liking [the posts], then somehow he jumped in my inbox… he thought I was ‘cyber crushing’ and thought that I was after him, but I really wasn’t, I just liked what he was posting…” Kenisha added. “I remember looking at his pictures and asking myself if I really thought he was cute…I wasn’t so sure.”

CJ thinks Kenisha’s post likes were a little more intentional “and it made me take notice of her. I was like ‘let me go look at this girl’s pictures and see what she’s looking like.”

“I thought she was real pretty, she seemed real nurturing to me, and I felt like I heard something say ‘y’all would be good together,” he said.

From there, CJ decided to message Kenisha a simple compliment– “pretty pics.” She responded as well, he said, with “Thank You, with a million exclamation points,” he said.

“The next day was Easter Sunday . . . and after she liked my post, I asked her if she was single and if I could call her some time.” Kenisha said, “yes,” and the two set their first date.

First date: After Easter, 2016, the pair had their first date at the movie theater in McCalla, where they saw ‘White House Down’.  “I thought our first date would have been to dinner so that we could have talked, but it wasn’t. He offered dinner afterwards, but I had to get up early the next day for work,” she said.

The Turn: By October 2017, the two had been dating for a year and Kenisha said she grew in her prayer life and relationship with God during that time.

“I know I got a testimony…I didn’t really have any clothes when I met him…, God had me isolated by myself (and my sons Javeon and Cory) and told me ‘I’m gonna let you get all the way to the bottom, just to restore you and bring you all the way to the top and you’re going to testify and give me all the glory,” Kenisha said. “For that first date, [when he took her to the movies] one of my co-workers took me and bought my outfit and she took me to the nail shop and got my nails done…he [CJ] didn’t even know I didn’t have any clothes, but literally just started bringing me things and would say ‘I think you would look nice in this’. He did help cultivate me because he would see things in me that I didn’t even see myself, and he showed me that your relationship with God is bigger than religion.”

CJ said he had been looking for a mate that fit in with his family and children, who included sons Jamarion and Jaybrin, and daughters Jakailyn, and Jazariya, his ministry and his heart.

“I saw that she didn’t really know herself, so I wanted to ease in and help make her into the woman that she was … I could see she had some self-esteem issues and I wanted to cultivate the woman God called her to be.”

The proposal: October 2017, CJ called an impromptu family gathering at their home in 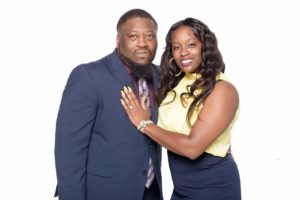 Center Point and invited his mother, sister and brother in law and their children, and his best friend.

“My niece thought of a game to play with blindfolds on…the kids went first, and when it was her turn, I played our favorite song . . . and once her turn was up and she took the blindfold off, I was in front of her on one knee,” CJ said. “She got up and went crazy.”

Kenisha said she had no idea what was going on.

“While I was blindfolded I kept hearing our song playing over and over and I was hollering for him to turn it off because I thought it was his ringer going off, but when I turned around he was on his knees. I was shocked, I didn’t expect that that night. I turned around and walked to the dining room and then I came back… and they were like ‘Kenisha you didn’t tell him yes or no’…then I walked back in there and told him yeah, and he was trying to put the ring on the wrong finger,” she laughed.

The wedding: The couple was married at The Dannon Project in Birmingham. Their colors were purple, blue, white and silver. Most memorable for Kenisha was the moment she realized she was “really married” after taking their vows.

“God’s prophecy had been fulfilled. He took me to the bottom to bring me to the top and give me everything he promised and I wanted and I was to give all the credit to him,” she said. Most memorable for CJ was the garter toss. I took it off while singing to her,” he said. The newlyweds honeymooned in Miami, FL.

Words of wisdom: “Cultivate” your marriage in order for it to grow, and when blending families, it’s imperative to create a system that works for the collective good of all, the Andersons said.

“Marriage is like a garden, if you don’t cultivate it, weeds will sprout up,” CJ said. “You have to communicate, go on dates, be on one accord spiritually. We know when each other are mad, we pray together, we serve at church together. Marriage is like a three-legged stool, it’s you, your spouse and God. If one leg is missing, the stool is going to fall.”

Kenisha said, “marriage doesn’t create problems, it reveals problems that have already been there. You have to work together to get to the root cause of it.”

Blending families can be rough because “you have two different backgrounds and two different upbringings and two different ways of doing things,” Kenisha said. Happily ever after: The Anderson’s said that they are enjoying life, God’s promises and prosperity, while raising their six children. They share Kenisha’s sons Javeon, 15 and Cory, 8, and CJ’s children: son Jamarion, 15, daughter Jakailyn, 11, daughter Jazariya, 10, and son Jaybrin, 5.

Kenisha, 34, is a Bessemer native and attended Fairfield Preparatory High School. She works in the automotive industry as a parts maker and helps run their family owned daycare ‘Life Changing Kids’ in East Lake.

CJ, 35, is a North Birmingham native, and attended Phillips High School. He is Pastor of Life Changing Worship Center in East Lake and owns their daycare.