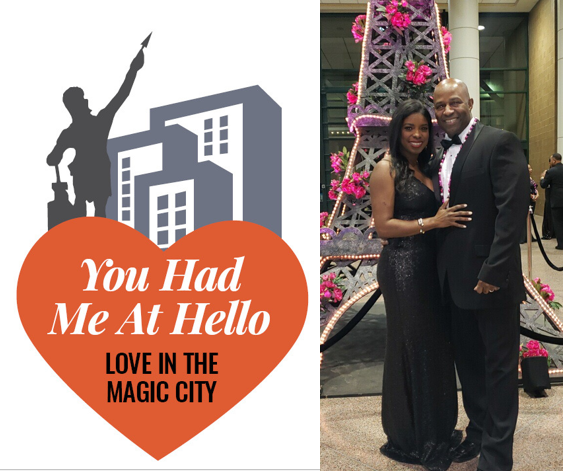 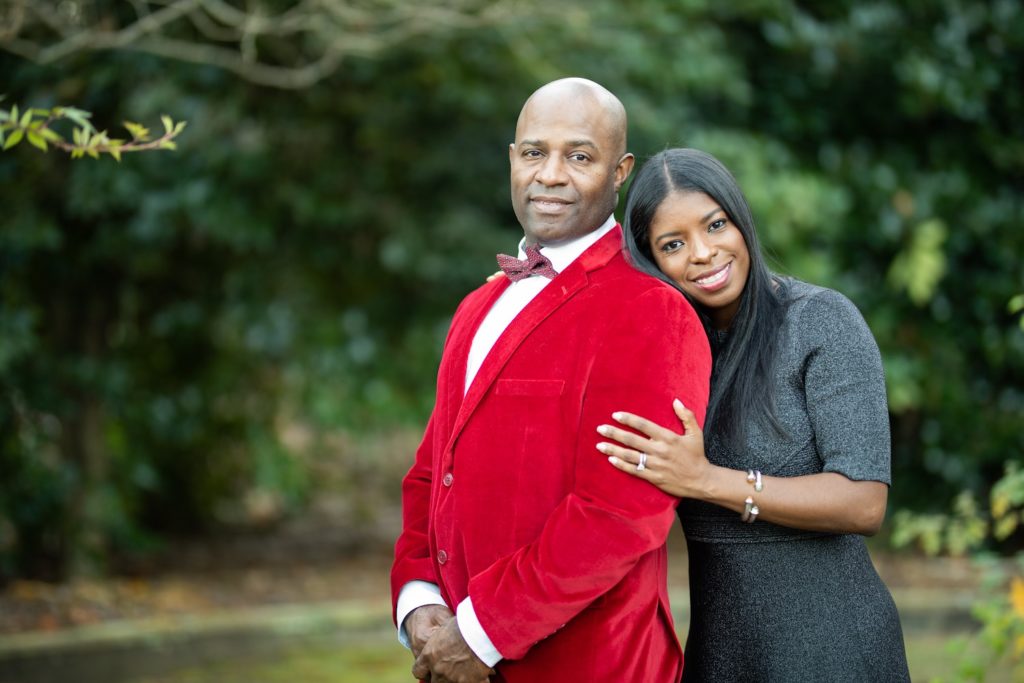 Met: Hakeem first saw Chauntell in November 1997, in New Orleans while riding around town after the Bayou Classic, the annual rivalry game between Grambling State University and Southern University. He was so eager to make her acquaintance that he pulled over and parked but lost her in the crowd.

No worries. Months later, Hakeem and Chauntell would meet at a social event where they conversed and she indicated that she had a friend, Hakeem recalled. Chauntell remembered “his brother trying to talk to me, and ‘I was like who are you in here with?’ [He looked young and had just turned 18], and he said, ‘his brother’, and I looked around and saw Hakeem… I thought he was really handsome,” she said.

The New Orleans natives would run into one another for the next few months. Chauntell was a student at Dillard University and Hakeem had already graduated from the University of New Orleans and joined the U.S. Army.

“A couple of months later, I believe it was around May (1998) I saw him again [but never exchanged numbers] because I was dating someone,” Chauntell said. Finally, one night after several chance encounters, Chauntell gave Hakeem a way to contact her, “I told him ‘I’m not writing my number down, so if you remember it, call me,’ she said.”

“Yeah, this was before cell phones, and it was your beeper number and not your phone number,” Hakeem laughed.

They developed a friendship that created a deep bond, and Hakeem was a shoulder to lean on after Chauntell’s father passed away.

“…we were kind of nervous about being out and about with each other for the first time, [but] we had really good conversation, great food, she laughed a lot. It was cool because unlike most first dates, we already knew each other,” Hakeem said.

“It was great, we were friends, it wasn’t anything that was forced so that was a plus…when I saw him there was always something about his eyes….that time he brought me flowers…,” Chauntell said.

The turn: By the year 2000, Chauntell had graduated from nursing and had begun a career as a travel nurse and had taken an assignment in California. When she mentioned taking a more permanent assignment out West, Hakeem said, “Being away from her made me realize how I felt, so at that point I was putting more focus on what I was doing with my life and I was adding her to that equation, so I just took the initiative to take it to that next step.”

The proposal: December 2000, at the W Hotel in New Orleans. “I rented a room for the weekend, we were like tourists, we went out to the French Quarter and had dinner,” said Hakeem. “We did the carriage ride, and when we got back to the room we were kind of relaxing and I started talking to her about what her plans were and she was giving me the rundown on what she’d be doing for the next three to six months and she mentioned another assignment. So, I started telling her how I felt about her and what my plans were, which included her, and at that point, I proposed.”

“I actually said, ‘are you serious right now? And he said, ‘yes I am serious,’ and then I was like ‘yes, of course, but did you ask my mom before you proposed?’ And he said, ‘yes, I did,’ and then I was like ‘ok, of course, I’ll marry you,’” Chauntell remembered. “I was very excited, I’m not a crier, but I was super excited and kept saying ‘yes, of course’. And then I called all my friends that night and told them that I was engaged.”

The wedding: The couple had an evening wedding at St. Peter Claver Catholic Church in New Orleans. Their colors were cream, gold, and burnt orange.

Most memorable for the bride was walking down the aisle with her mother as her escort. “…I had a dancer [go before] and dance…she wore all white and danced to Donny Hathaway’s song ‘A Song For You’ as a tribute to my father,” Chauntell said.

Most memorable for the groom was “my daughter coming down the aisle and being happy that she was a part of our wedding. I had just gotten back in town the night before [from training], so I hadn’t seen her in like a month… and seeing [Chauntell] coming down the aisle with her mom and my daughter and just knowing what the family had been through [with the loss of her father], it was all overwhelming…,” Hakeem said.

Words of wisdom: “Because we started out as a friendship, I think that’s what made our marriage last for so long. I think friendship is more important than the romantic or the physical side,” Chauntell said.

Unwavering commitment and open communication are other keys, Chauntell said. “We both know we’re in it for the long haul,” she said, “Tell your spouse how you feel at that time. For some, it may be better to cool off a bit, but I basically just say how I feel. We talk about everything, we literally talk three or four times a day and if I have something going on with me, I say look, this is how I feel. My advice would be to tell each other how you feel.”

“We were young and came up in different backgrounds, we were both raised in a family environment, but we had two different backgrounds and images of how a family was,” Hakeem said. “For her, it was her dad, and for me, it was more of my mom, but we were trying to be the opposite of what our parents were… I talked to my dad and I had to learn to not fuss and fight with her over little things. So, I developed a philosophy of giving her 95 percent of what she wanted if it didn’t matter that much to me. And that other five percent I reserved for things of priority…so basically, ‘the happy wife, happy life’ philosophy has worked for us…”.

Hakeem added he learned to compromise and be open minded.

“When we first got together I thought she . . . was supposed to stay home and cook and clean, and she was like, ‘I’m not a maid, I’m not going to do that’ … it was a lot of compromises and being young, I wasn’t sure how to do that . . . , [but] I learned . . . there are certain things that we may meet in the middle on, but I also lean on her for her strengths and I trust her judgment.”

Happily ever after: The Holmes have three children: daughter Hailey 17, and twin sons Carter and Colston, 9.

Chauntell, 43, works as an RN at the Birmingham Veterans Administration Medical Center. Hakeem, 46, is a major in the U.S. Army.