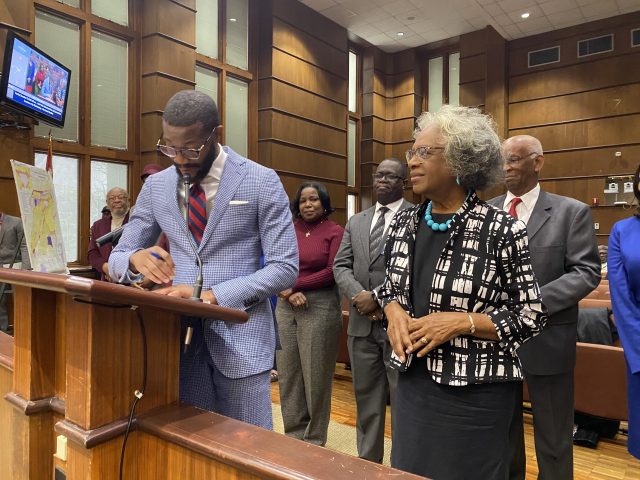 In early December 2019, Donzella Washington made history at Alabama Agriculture & Mechanical University by becoming the oldest person to graduate from the school. At 80 years old, she earned her bachelor’s degree in social work.

She never set out to break any records. It’s just that having a degree in social work was something she’s wanted since graduating from high school in 1957. But a few negative words from someone she knew made her think that graduating from college was unattainable – especially for her.

And with that, Washington put her dream on the shelf – for years.
She got married, had a family, reared 32 foster children, had a six-year career with a police department in Tulare, Calif., was a stay-at-home mom for 15 years and had an 18-year career at a bank in Visalia, Calif.

Washington said she always felt she wasn’t smart because she stuttered. Plus, she said, her two sisters “always made me feel like I was dumb. So, I believed it.’’

But in 2005 while in California, the pull of having a higher education grew stronger and she enrolled in a community college, where she took speech classes to help her with her severe stuttering.

“I just felt that if I took speech classes, that would help me. And it did,’’ she said. “The classes just boosted my self-confidence.’’

A few more years passed. Washington’s mother died in 2010 and her husband passed in 2011. In 2012, she moved to the metro Birmingham area to live with her daughter and start a new life.

Part of that new life involved enrolling at Lawson State Community College in Birmingham in 2013.

Her goal was to get an associate’s degree, which she did in 2017 at the age of 78. She thought that would be it. However, an instructor at Lawson saw so much more in Washington and encouraged her to get a bachelor’s degree.

Lawson had recently started a program where A&M rented space on their campus to offer classes. Luckily, one of the undergraduate programs was in social work – Washington’s dream area of study. She enrolled in the class and was a top student, earning a 4.0.

“Since my husband had been so supportive of me going back to school, I decided I wanted to finish my bachelor’s degree in his honor,’’ she said.

Now, that she’s graduated with a bachelor’s degree, she’s planning on returning to Lawson in June 2020 to enroll in A&M’s master’s program. She said taking the A&M classes at Lawson was attractive because she did not have to drive all the way to Huntsville, which is where the school is based.

“Even though there were a lot of tears and late-night studying at 1 or 2 o’clock in the morning, I was determined,’’ Washington said. “I never felt like quitting.’’

“Mrs. Washington, I want to thank you for being a shining example to all of us. Age is clearly only a number, and clearly, we need to be on your regime,’’ said Woodfin. “We are here to love on you and celebrate you.’’

Ward said so many students are taking advantage of what Lawson State has to offer and becoming outstanding citizens in Birmingham.

“Part of what we try to do is create super highways or pathways for individuals to select where they want to go, be able to do what they want to do and create a road to get there. We created, about 3.5 years ago, an opportunity with (A&M President) Dr. Andrew Hugine Jr., where (A&M) would come to Lawson State and offer … junior and senior level courses on campus.”

Said Williams: “We are so delighted to have the partnership with Lawson State. It has afforded us the opportunity for many of our students to start there and go anywhere in the world.’’

Washington said she hopes her accomplishment will encourage others to never give up on their dreams.

“My mission is to inspire others to let them know, and like the mayor said, age is just a number,’’ she said. “Whatever dreams you had as a child, you can obtain them. It’s all what is within you to reach your goal.’’’