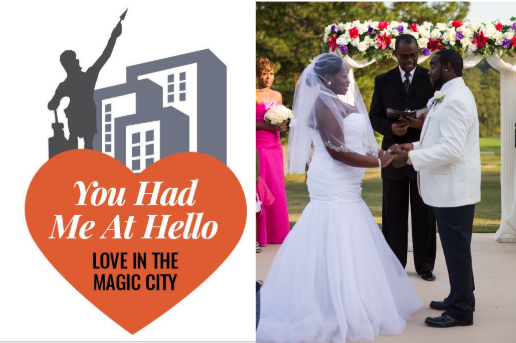 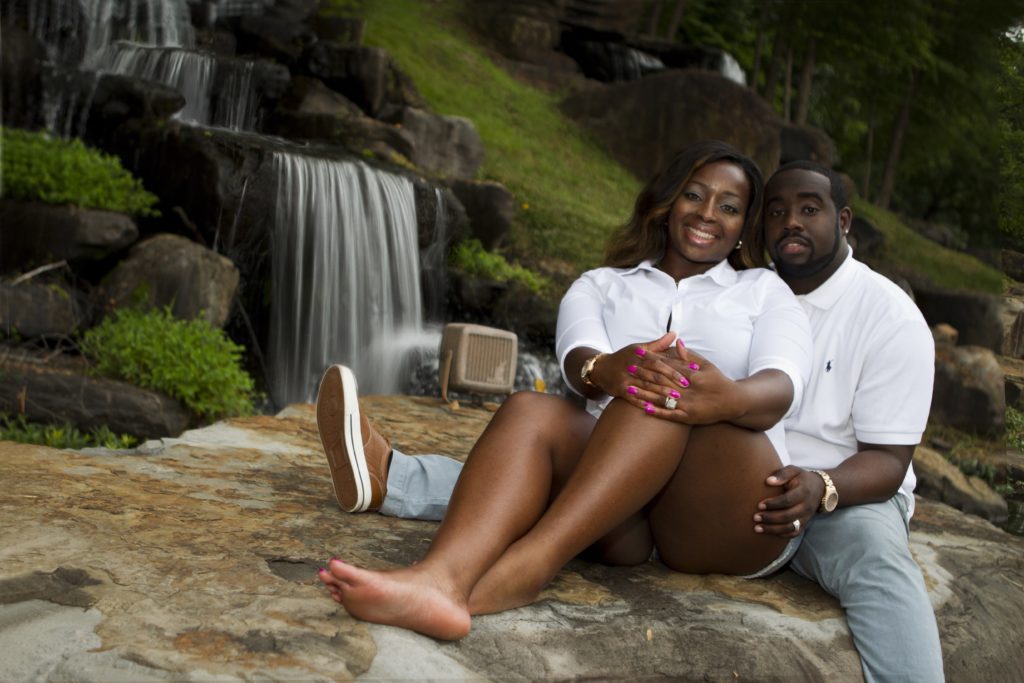 Met: In 2004 at George Washington Carver High School in their AP (advanced placement) math class. Ashley was a junior and Dexter, a senior. She described him as “the class clown” who kept her laughing in class. When he asked for her phone number “I didn’t take him seriously because he was always clowning,” she recalled, “…but it wasn’t until he graduated that we started dating,” she said. “One of his friends played basketball with me and he asked her to get my number for him, and I told her to tell him that if he was serious he’d come up there and get it himself.”

Dexter remembered it this way: “She had been stalking me since the 10th grade, and finally, I got a class with her and I decided to get her number but I was too busy to call…[after he graduated in 2005] I decided to go up to the basketball game and get her number again, and that was that,” he said.

First date: In November 2005, at the Wildwood Movie Theater on Lakeshore. They saw “Get Rich or Die Trying”, and had dinner at the nearby IHOP after the movie.

“It wasn’t awkward for me, but it was awkward with him meeting my mom and stepdad. He did good though because they liked him enough to let me go out on the date with him,” she said. “He was hilarious, he made me laugh the entire time…”

Dexter said he doesn’t recall much about the date “but I do remember what she had on, “he said. “I really liked the way that black Fetish shirt and her jeans fit. And the security guard asked her what she had a fetish for and I said ‘me!’”

The turn: In the fall of 2010 the two began a “clean slate” and started going to church at Faith Chapel Christian Center and headed towards marriage.

“I told her that she was who I really wanted to be with and that I wanted to start from scratch,” Dexter said. “We decided we wanted to date exclusively and take us seriously and give it an honest and fair chance.”

“I called her mother and told her mother what was on my mind and that I wanted to marry her daughter, and she told me that we had her well wishes,” Dexter said. “Then I called her stepfather, he agreed to it as well. Then I called and asked my brother and his fiance if I could propose at their wedding and they said ‘yes,’ So when I went up to do my best man speech, at the end, I said I had something special to ask my lady and I called Ashley up and got on one knee and asked her would she be my wife. She giggled the whole time and then said ‘hell yeah’.”

“I was thinking ‘what the hell? and why here,?” Ashley remembered. “After I stopped laughing out of surprise because he did catch me off guard…once I heard his speech it was very intentional and very specific to us, so I said ‘oh, he’s serious’, and I said hell yeah.”

The wedding: Pine Tree Country Club in Irondale, on the golf course. The wedding was officiated by Pastor Tyrone Fornest, their pre-marital counselor at Faith Chapel Christian Center in Wylam. Their colors were navy blue and fuchsia.

Most memorable for the bride was “the vow exchange. That was the first time I’d ever seen or heard him being nervous. He was so nervous that his voice was trembling and I had to put my ear to his mouth because I couldn’t hear him,” Ashley laughed. “Then everybody started laughing and he shook it off and started talking like his normal self, loud and bold.”

Most memorable for the groom was that “the male singer couldn’t sing…I was out front, me and both of my best men, and it was time for the bride to come down the aisle and I couldn’t get into the moment because the singing was so terrible,” Dexter said.

They went on a cruise to Nassau Bahamas for their honeymoon. “We left that Sunday morning, the very next day. It was Dexter’s first cruise, we had a beautiful time,” Ashley said.

“Prayer has definitely saved us in more than one way,” Ashley said. “In 2010 when we started working on things seriously, one of my stipulations was going to church together…we also have a lot of positive older couples around us, so, that’s a good inspiration for us.

She added, “Every year for New Year’s and our anniversary, we give each other a to-do list of things to work on. This way we know what to work on and it’s brought [to one another] out of love and happiness and not a bad place, like during an argument.”

Dexter said self-reflection is important. “…We have been through some rough patches but for me it’s more so looking at the things that I did that caused problems and the things she disliked. And so, I thought if I could work on myself, things would get better.”

Happily ever after: The couple has one son, Dexter II, 4.

Ashley, 31, a Bessemer native, earned her bachelor of science in Nursing  degree at Jacksonville State University (Jacksonville, AL), works as a registered nurse.  Dexter, 32, a Birmingham native, earned a certification in mining and technology from Bevill State Community College and works in the industrial steel industry.