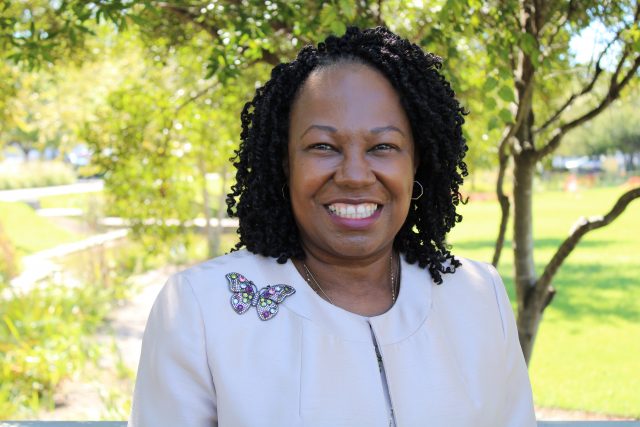 Cecelia Walker, Birmingham native and A.H. Parker High School grad, said, “I was born on Monday, and my mother says I was at church on that Sunday.”

And Walker, executive director of chaplaincy and clinical pastoral education for Brookwood Baptist Health, has stayed close to the church since.

“I used to sit at my grandfather’s feet and listen to him read scripture to me,” she said. “He told me I was going to do great things for God, but I didn’t know what that meant.”

Walker’s entire life’s work has meant helping people deal with hardships and providing broad community services; and she believes the importance of chaplains cannot be understated, particularly during the ongoing COVID-19 pandemic.

“[Chaplains] advocate and speak up for families and patients. Sometimes patients might need a family member to help them cope, ask questions, or hear medical advice, so we can negotiate for those people to be there,” she said.

Walker has received widespread recognition for her work and was recently elected to the board of trustees for her alma mater, Samford University, where she graduated from the Beeson School of Divinity.

“I am incredibly honored to be able to serve in this capacity and give back to a university that has opened countless doors for me,” said Walker, of the four-year appointment; Samford’s 40-member board serves as the governing body for the university.

“Through this opportunity, I look forward to being a part of helping to further the university’s mission to nurture persons in their development, intellect, creativity, faith, and personhood,” she said.

Attending Samford was a career changer for Walker. In 1994, she enrolled at the school to obtain a Master of Divinity degree and began to consider where she wanted to go in life—and when her husband, Jeffery, passed away suddenly.

“A chaplain came to be with [my family and me] and encouraged us to go see my husband,” she said.

That recalled an experience of seeing her father after he passed away, his body thrown into a room that looked very much like a supply closet and “naked and frozen in the position he died in,” she said.

When it came time to view her husband’s body, Walker hesitated, but the chaplain was an immense comfort.

“Jeffery was in the bed like he was sleeping, and I was able to say goodbye with dignity,” she remembered.

Walker never forgot the comfort she received during that emotional time and during her last semester at Beeson. The kindness and empathy the chaplain showed made her want to provide the same compassion to others. She spoke to the chaplain who stayed with her during her husband’s passing and, after completing her master’s degree studies in 1998, embarked on two years of residency at the University of Alabama at Birmingham (UAB), serving as a trauma chaplain fellow.

“I became chaplain for the emergency trauma and burn section after earning my doctorate,” Walker said.

After finishing her UAB chaplaincy in 2000, Walker still wanted to learn more ways to help the most vulnerable in society. She chose to attend the Morehouse School of Religion in Atlanta, Georgia, in part, because of the influence Civil Rights giant and Morehouse alum the Rev. Dr. Martin Luther King Jr. had on her life.

“[King’s] message was just so concurrent with the fact that we’re all created in the image of God. [He had] so much respect for people and embraced Mahatma Gandhi’s ideas about nonviolence,” said Walker, who lived three blocks from Dynamite Hill, a neighborhood in Smithfield that was bombed multiple times during the Civil Rights Movement to threaten Black people in the area; it was also a community King would often visit.

At Morehouse, she said, “I learned about womanist theology and liberation, [a religious concept that aims to be inclusive and empowering for Black women], and Black liberation theology. … It was a great blend of what I already had academically and things I knew I was missing.”

Walker was raised as a Baptist alongside three brothers and one sister, and her uncles and grandfathers were in Baptist ministry. When she was younger, Walker, now 61, said, “I didn’t think women could be preachers or ministers.”

Nonetheless, she would eventually serve as an associate pastor for Trinity Baptist Church in Birmingham’s Bush Hills neighborhood and encourage young Black women that they could do the same—and even more.

“One of the teenagers there told me she saw that she could do anything because of me,” she said.

Walker earned a Bachelor of Arts degree in human resources management from Birmingham Southern College in 1993 and worked for 18 years with the Birmingham Public Library, serving as the first African American to hold a full-time position at the Avondale branch. Even there she was a beacon of hope.

“Patrons would come in and share their problems with me, and I would pray with them at the library,” she said.

In pursuit of her Doctor of Ministry degree from the Interdenominational Theological Center of the Morehouse School of Religion, Walker wrote a dissertation that combined her love of children, community, and cultural issues with spiritual formation in African American children.

“When I started looking for books on that [subject], there weren’t any. It’s important to have a foundation and understanding, to be as equipped as possible when you’re largely working with African American people,” said Walker, who returned to Birmingham in 2007, after earning her doctorate.

Walker is also an Association for Clinical Pastoral Education (ACPE)-certified educator for a parish-based CPE program at the Morning Pilgrim Baptist Church in Montgomery, Alabama, and as an associate minister at Birmingham’s Greater Shiloh Baptist Church. In 2012, she became director of pastoral care for Princeton Baptist; in February of this year, she was promoted to executive director of chaplaincy and CPE.

“To be able to have an impact on the people I grew up with and their families is phenomenal,” she said. “The whole system is grounded on the faith that I have in Jesus and being a healing presence. It’s a perfect environment for me.”

Walker, who also serves as national certification chair for the ACPE, said she’s proud of the CPE program, which is the oldest in the state.

“We give people resources to help others when they are having spiritual difficulties,” she said, explaining that anyone can join the program, from community members to aspiring professional chaplains.

The pandemic has forced Walker’s chaplaincy program to make adjustments: “Normally, we hug and touch patients, so we’ve had to learn how to benefit people at a distance,” she said.

Chaplains visit patients from outside of their rooms and over FaceTime. Patients with COVID-19 are not allowed visitors at all, so chaplains may gather patients’ family members outside, where they can look in at their loved ones and feel more connected.

“[Chaplains] make phone calls to the families to keep them connected with what’s going on. All of our chaplains relay messages if a loved one is in surgery and pray with the family during a time of loss,” Walker said, adding that chaplains also encourage medical workers by writing and delivering devotionals, as well as providing snacks for them.

Walker, married to Roy Ambrose for 11 years, reflected on the challenges she has faced and how they help her empathize with others. She thinks of her father and her first husband, as well as her daughter Gabrielle and son Jeffery, who died at 14 and 31, respectively. God helped her carry on, she said.

“He is faithful. … While the pandemic has caught me off guard, shaking my world, He is still steady. If I continue to trust and depend on Him, He will lead me through whatever,” Walker said.