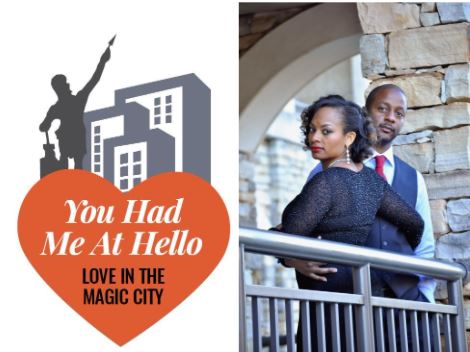 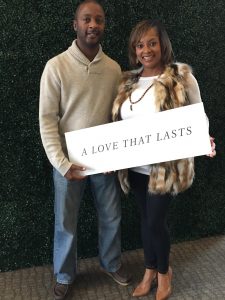 Met: At a Kappa Alpha Psi fraternity party at Miles College in 1998. “I went to Talladega College and he went to Samford [University]. My sorority sisters [Alpha Kappa Alpha Sorority Inc.] and I went, and his fraternity brothers and he went, so we met there,” Autumm said.

She noticed Reginald was a little quiet and reserved, but “he was good looking. We had literally just met, so I didn’t know him, but he was nice, so I gave him my phone number and we started talking,” she said.

“She was extremely talkative and outgoing, so that’s what made me want to talk to her,” Reginald remembered.

Once the party was over, Autumm and Reginald went back to their respective schools and Autumm said they chatted on and off. “At the time we were sophomores in college, so [the relationship] didn’t stick. We didn’t become a couple until our senior year,” she said.

First date: O’Charleys in Wildwood, now closed, July of 2000. “This was the first real date we went on, and the first time we could talk in person, since before that it was just phone conversations,” Reginald said. “We spent a lot of time getting to know each other. I think during that time, Autumm’s mother was ill, so we talked about her and her family.”

As their relationship grew, Autumm remembered bonding over their hobbies and goals. “I like to read books, he likes to travel. While we were dating, he would listen to all my school stories because I was doing student teaching at the time. We talked about our future goals, and we realized we wanted similar things for our lives,” she said.

Reginald agreed. “She was extremely goal-oriented like myself, and she had a good head on her shoulders. We were able to talk about our goals and aspirations, and that drew us together,” he said. “She was also very family-oriented.”

The turn: After they had been together for a few years, Autumm said she just knew. “Sometimes you just have a feeling, and for me I just knew that there was no one else. I was excited about everything we did together. I always went to him for everything. As he said, my mom was ill earlier on, and she eventually passed, but he was there through all of that for me,” she said.

Reginald said Autumm was the first person he went to talk to if he received any awards, or was having a bad day. “She was the person I’d want to talk to to feel better,” he said. “Through the good and bad, she was a major part of my life.”

Proposal: May 31, 2003, at Colonnade Park on US-280. “We had dinner at Taste of Thailand in Hoover, then we went to the park near a little lake. She had no idea I was going to propose to her, but I was just talking to her about my feelings for her and how I wanted to spend the rest of my life with her,” Reginald said.

“Reginald initially wanted to propose on his birthday, May 30, but he couldn’t ask my grandparents for their blessing first,” Autumm said. “So he waited until the next day [to propose] and I said yes.”

Most memorable moment for the bride was the ceremony. “When I first started walking down the aisle and I saw Reginald, it was like, this is finally happening, this is real,” Autumm said. “Seeing all of our friends and family that came to celebrate, it was a very packed church.”

Reginald said the anticipation of getting married was memorable for him. “When I saw her coming down the aisle, and I saw her in her wedding gown… I just realized this is about to happen,” he said.

For their honeymoon, the couple took a four-day cruise to the Bahamas.

Words of wisdom: “Communication is key,” Autumm said. “Communicating your feelings and desires so the other person doesn’t have to guess. The hardest thing about marriage is as you get older and more established, you have to remember to balance everything. You’ve got work, if you have children, the marriage itself, your friends, all of it.”

He also agreed with Autumm about balance. “You’re so used to being single, living your own life and doing what you want to do. Once you’re married, you have to compromise. Maintain that level of communication you had when you first started out and manage your time with your career and your children,” he said. 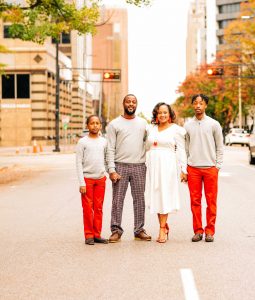 Happily ever after: Autumm and Reginald have two children: Jordan, 14, and Joshua, 11.

Reginald Jeter is a Birmingham, Alabama native. He received a bachelor’s degree in business administration and management from Samford University, a Juris Doctor degree from the University of Alabama Law School and a Master of Business Administration degree from the University of Alabama at Birmingham. He currently serves as a Circuit Court Judge for Jefferson County.